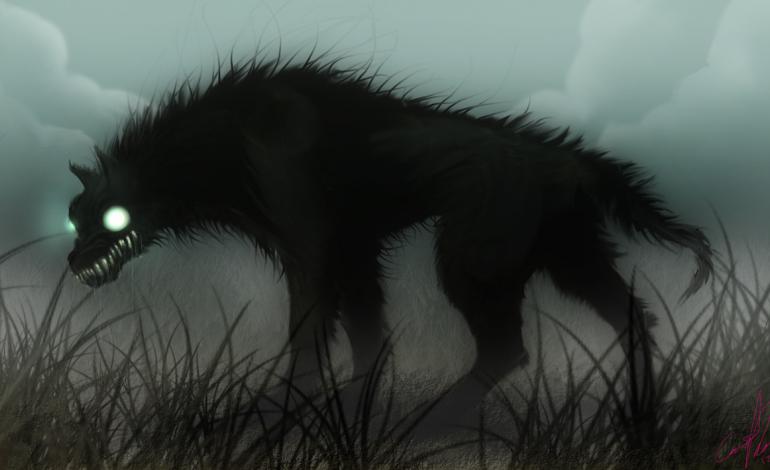 The Black dog Ghost, which is mainly associated with British Folklore (Even though some people believe that this creature originated from Celtic or German mythology)

The beast is often referred to as a manifestation of the devil or even one of his minions, in some cases even an omen of death. According to legend four hundred years ago on August the 14th in the year 1577 ” The Black Dog ” was responsible for killing a mass of people who were praying in a Church which was situated in East Anglia ( Which coincidently is where the creature frequently lurks)

However there have also been reports of seeing the Omen in other parts of the UK, Such as Norfolk, Graham Grant was on duty when he noticed a huge black shaggy dog, walking across the beach, ” The dog seemed to be searching for something, it didn’t look like a normal dog, It was very large and it almost seemed like he had a higher purpose.

“Location: A684 (Yorkshire) - Between North Allerton and Lemming Bar

Further Comments: A large black dog ran in front of two women travelling to Lemming Bar by car. The driver closed her eyes and braked hard, expecting to hit the creature. The passenger watched the hound pass through the bonnet, and noticed the creature had no facial features, floppy ears, and was shadow-like. A man that the women spoke to once they reached their destination later killed himself - was the hound a portent?”

“Location: Alfriston (Sussex) - Between the Downs and Town Fields

Further Comments: A large black dog is said to run from the Downs to Town Fields - here it stares over a flint wall before retreating the way it came.”

Further Comments: Charles Walton (the same man who was murdered in Lower Quinton (see Quinton database entry for further information)) claimed to have seen a phantom black dog for several successive nights when he was younger - on the last night, instead of the dog, he saw a ghostly headless woman. He soon heard that his sister had died at roughly the same time as the last sighting. “

Judging by the countless eyewitness accounts that I came across whilst doing research for this article; it seems that there is indeed a creature lurking in the shadows. Or could it just a common Fox or wildlife creature maybe even a wolf?