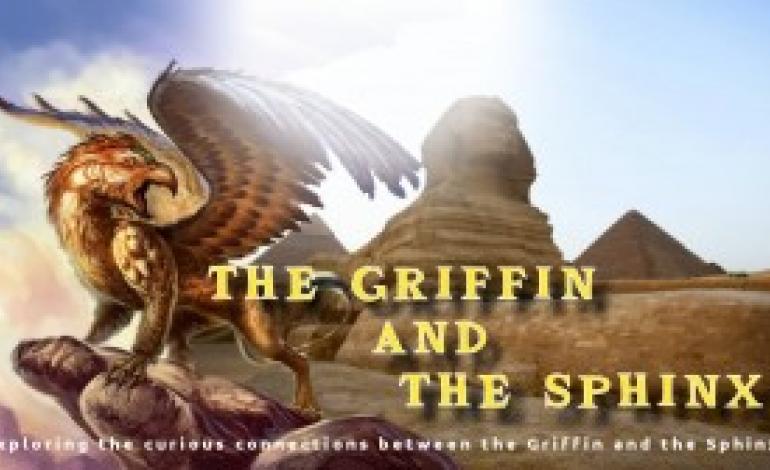 There are a remarkable number of similarities in the mythos. We look at those in detail. We put forward information to the origin of the Sphinx’s head, what it may have more likely been based on the stories - that it was the face of a bird of prey/falcon. The strong connections of mythological Horus / Apollo / Mercury to this.

Was the Sphinx built in effigy to something the ancient people had witnessed flown by an alleged god of the flying sun? Is this then also the foundation of the mystery of the Griffin?

The characteristics of the Griffin within the mythology which envelope around the beast. Have a common portrayal, of regal i.e. kingly. Divine, in touch with/or from the gods. Thought as being very wise and knowledgeable. Challenging people with riddles in contests of wits. Often also as a trickster. A reflection of attributes held also by the sphinx. The description of our regal Griffin which adorns the heraldy and flags of a number of regions and countries of the world.

The Griffin chimera-like body, is perhaps the most known. Being an amalgamation of the body of a grand male lion, and the head of a bird of prey. Most often than not, depicted with the ability of flight, by large wings that protrude from its back. Found in stories from Western Europe, Persian, Egypt, to far as India. A wide berth for sure. Sounds like this golden skinned creature got around.

Griffins, do they exist?

Firstly one should ask, does such a creature exist? Or may have existed as a natural beast?

Adrienne Mayor of Stanford University puts forth a potential candidate for the griffin’s physical description.

Several fossil findings of a creature known as the Pentaceratops, a large dinosaur of the cretaceous period, evidence of a beaked face with a large, four legged body. On observation, not necessary wings, but a large frill. Depicted going back away from the head. Does look like the key contender. Adding substance to this resolution. Many of the skeletons and bodies found of Pentaceratops have been located near notable gold veins, adding to the legends that these Griffins were protecting treasures.

Griffins are quite literally the Chariots of the gods. The Greek god Apollo, the god of the sun – or rather a sun disc. The Griffin would carry the sun god from the earth to the skies, Apollo often represents wisdom, knowledge. Power – all the same characterized by the Griffin. This thought leads one to question, whether or not people didn’t speak to the Griffin but were instead talking to Apollo on of or inside of the Griffin. Rounded by the notion that despite depictions of the griffins across the wide in their scope – they are not even identified as being individual. Named. Or have spoken about themselves.

There is no significate Griffin in the Mythos at all. Apollo, is mirrored as Mercury in the Roman god phantenton. Cultures seemed to either be interacting with the same entities, taking on different names or variants. Or the stories were adopted in whole. Which is quite an incredible feat in retrospect, to have everyone take on another culture en masse, as a societal whole with one would assume already with set of a values, their own culture and belief structure. His Egyptian origin places Apollo, as the Egyptian god of the sun, Horus. Let us look at the some of the complexity of the sun god Horus, there is an incredible statue at the temple of Edfu in Egypt, strong and imposing. Complete with a presence of the head of a bird of prey, a falcon. His most frequent depiction.

Horus also is depicted as described in ‘Gods of the Egyptians’ by EA Wallace Budges research published in 1904. as a lion. Later also from fetish to god in ancient Egypt. In 1934. P218. The reference stating he appears in the form of a hawk headed lion.

Symbolism in the narrative recording, wonders if the characteristics of being a lion, and a falcon. And descriptions, that not literally meant to be taken that way, but that they are intrinsically linked to him, Horus.

Selim Hassan one of the most noted excavation leads and researchers of the 20th century - in one of his many publications ‘the sphinx its history in the light recent excavations’ published in 1949.

Ancient Egyptians closely identified Horus with the great sphinx of Giza. The sphinx is called Hor-em-akhet horus in the horizon and a variant horakti with the subtle difference on emphasis in the phrasing. To come to English as Horus of the horizon.

Salim Hassan, admits we have no single contemporary inscription to enlighten us the exact age of sphinx. The Sphinx, Hor-akhti with its body of a lion and an eroded face, much smaller than the body which accompanies the megalithic edifice. Maybe likely the face of a Pharaoh/king who sort to ‘update’ the sphinx, a defacing of the highest order, or seeking to fix in their own likeness. Of course, leaders and rulers do these kind of things.

Working together to attempt to date the age of the sphinx, historical architect Dr Jonathan Foyle, who worked with geologist Colin Reader found high levels of rain erosion in the Sphinx’s enclosure. Much to confirm in the 90s Geologist Robert Schoch concluded that the Sphinx must be much older than currently believed after an investigation in the 1990s. Schoch has argued that the particular weathering found on the body of the Sphinx and surrounding ‘ditch’ the monument was carved from, displays features that can only be caused from prolonged water erosion.Reader on the project, said the head and body were massively out of proportion.

He said the reason for this could be that the Sphinx originally had an entirely different head.

Egypt’s last time period where there was a significant amount of rainfall ended during the late 4000bc at a conservative guess.

Indeed the sphinx has taken some significant damage over the ages. Including being struck by a ‘physical’ lighting bolt. Delivery With tremendous force, the impact left its mark. There is 4m long trace of mortar repair stands out from where the collision occurred on the tail of the nemes headdress. Likely candidate is, a meteorite. As the description of the event is thus; falling object from the sky, thunderous noise and descending in fire – we know also to be a physical tangible object. This text say the lighting bolt survived the collision. In the inscriptions, Khufu came to see the thunderbolt in question during his tour. (ibid p223) indicating this object was no mere lighting strike is a physical one.

Simultaneously this also demonstrates that the sphinx was already present in the time of Khufu. This is contrary to the general egyptologist view is that the sphinx is the face of Khafre. An based on a miniature 10cm figurine less that is said to be Khafre. Khufu was his father and prior king.

Many of the Egyptologists, archaeologists, historians, geologists and journalists – have differing views and at logger heads of many aspects of the Egyptian history, this part is no exception.

‘The grand face, of the sphinx – Hor-ankti, faces the eastern horizon, almost perfectly due east. Where on the morning of the spring equinox rises presently in the processional transition between Pieces and Aquarius pieces moving into Aquarius, as we transition between the ‘aeons’. If we take the lion as being symbolic and in as above, so below. In the heavens as on earth.

The Lion faces the horizon in the precession cycle of when the Lion faces its mirror, the star sign Leo. We have to roll clock back quite significantly in time, to find when Sphinx faced Leo on the morn of the spring equinox.

As above as below

The theme of as above, so below is replicated across Giza plateau, Robert Duvall (Robert Bauvall in French) amongst others has been to considerable lengths, to prove this. That this not just with the sphinx, also with the pyramids and surrounding areas. A kind of time lock. Patterned to mirror ‘this’ moment in history. Astronomically aligned, that even with the precession. It could be charted back, using the time code of the monuments to the date they represent. Genius really, and a great way to send a message to stand across time.

Puts the sphinx in and around 10,500, the time during the vast global change, the ice across North America radically melted after the onset of a number of comets striking, the time he ‘Younger dryas’ period. W. A time when Egypt was lush with vegetation, greenery and fertile, very much the opposite of the sun scarred desert that is it today.

Let’s take a closer view at events of a more contemporary time. World War 2, there were many islands in the pacific were the natives were still somewhat primitive in their development. Such as the Melanesian, Polynesia n islands, of which the likes of Fiji, the Solomon islands, Papua new guinea and so forth. As America bolstered its influence and military presence across the pacific in an attempt to thwart the Japanese. Many of the islands become airfields and refuelling depots. The most noted and frequently quoted is the Island of Tanna in Vanuatu,in the new Hebrides of the islanders had never seen aircraft before. Objectifying them as gods, as they dropped goods, supplies. Food and cigarettes.

Much of which was shared with islanders. As the 2nd world war came to an end officially, the military personnel redeployed. The supply drops ceased. The islanders continued to mimic what they had seen of their occupying gods. Carving out headsets from wood, doing elaborate matching parades based on the military drills. Most notably building effigies of the aircraft, who they believe will come again. Some 60 years on, whole religions and belief structure have been born out of this. build to ask them to come again. You can probably see what it is i am attempting to illustrate. How cultures who have been heavily influenced will make their bold signs, calling for their gods to return. Was the Sphinx built on a grand scale to mimic the fantastical which they are seen and interacted with?

Where we have travelled in the article, one asks the question, we can say the current face of the Hor-em-akhet the sphinx was not its original face, adding the pieces together - is there the possibly as we have explored the face was that of a bird of prey/falcon? Very likely.

As the potential of it being a Lions head. The signposts of its connection, highlight that is the Falcon/birds of prey.

If so, the Sphinx then is the figurative Griffin in stone.

Which in turn allows the connection between Apollo/Horus, to be even stronger?

Seems on this train of thought the Sphinx, the horu-em-akhet is indeed the very griffin of legend.

If so, then is it possible that Horus/Apollo really took to the skies?

‘Fetish of the Gods of Egypt’ EA Wallace Budges 1934

‘The sphinx its history in the light recent excavations’ in Selim Hassan - 1949.

Sphinx - THE GREAT SPHINX IN THE AGE OF LEO?

Magicians of the Gods - Graham Hancock 2015