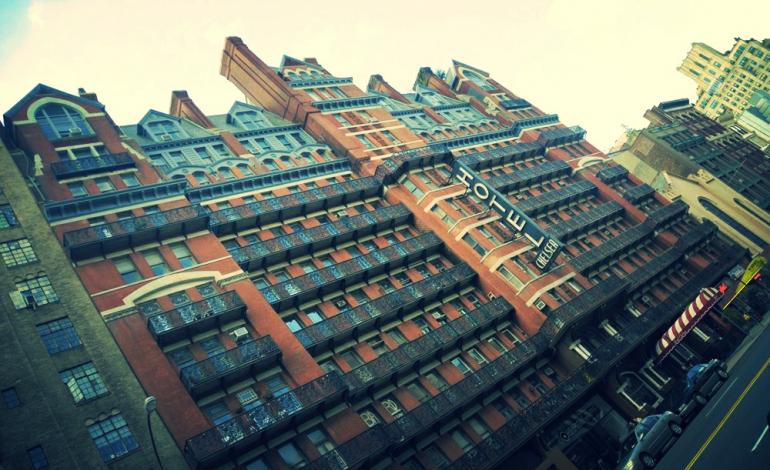 Some places are just born bad. You know, the kind of place that just has a dark cloud ominously hanging over it, and no matter how hard people try these places are just destined for bad things. The Hotel Chelsea in New York City just so happens to be one of these unfortunate places. A place where legends live and tragically die leaving there spirits to linger for all time.

From the very beginning, the Chelsea was doomed to fail miserably. Built in 1883, the Chelsea Hotel did have a promising start, or so it seemed. When the hotel opened its doors, it was an elegant hotel for New York’s elite stepping out to catch a show in the City’s original theatre district. But not long after opening, the theatre district moved leaving the Chelsea in financial ruin. Unable to keep the hotel open, the owners filed bankruptcy leaving the once thriving hotel nothing more than a shell of its former greatness.

Throughout the 20th century, ownership of the Chelsea changed hands numerous times, but financial problems were never far behind. Owner after owner, despite their best efforts, filed bankruptcy. It was almost as if this formerly posh hotel was not meant to be.

In the mid-20th century, the neighbourhood where the Chelsea stood became popular with musicians and artists of every kind. The hotel became a popular hangout with writers and rock legends such as Janis Joplin, Mini Hendrix and shock rocker, Alice Cooper. But the most tragic of them all was The Sex Pistols bass player, Sid Vicious and his turbulent relationship with his girlfriend, “Nauseating” Nancy Spungeon.

Anyone who knew them could tell you that the punkers were quite the pair. Nancy was well known for verbally abusing Sid and it didn’t matter where they were when she unleashed her barrage of insults. Sid would apparently take it, because, well, they loved the drugs and the drugs loved them. Some believe it was her horrible treatment of Sid that caused the punker to snap and allegedly murder his lady love.

On a cold October morning in 1978, Nancy was found dead in a pool of blood on the bathroom floor of room 100. She had suffered numerous stab wounds, and the only person was Sid, passed out after a night of shooting heroin, the couple’s drug of choice. Sid claimed to have no memory of the fight that resulted in his charming girlfriend being gutted. Sid was taken into custody by NYPD and charged with murder. But somehow, some way, Sid made bail and was released until his trial. A trial that never came. A few days after his release, Sid Vicious died alone and penniless from a massive heroin overdose.

Since that time, guests and staff at the Chelsea have reported hearing a violent fight coming from room 100, the room where Nancy met her fate. Upon investigating nothing and no one is found. It is believed the eerie yelling is the final moments before Sid murdered Nancy. And it’s not just the sounds of a spectral fight that has been reported coming from room 100. A tall lanky shadow has been witnessed lurking around the room. This shadow is believed to be the apparition of Sid Vicious forever haunting the room where his girlfriend died.

Of all the famous ghosts said to haunt the Chelsea, Welsh poet, Dylan Thomas is said to be the most active. In 1953, Thomas came to the Chelsea to be a part of the hip Bohemian scene. Shortly after arriving, Dylan Thomas fell ill and died. Some say the poet had a secret medical condition that eventually caught up to him and killed him. However, those who knew him said he had a severe drinking problem and died in room 206 from acute alcohol poisoning.

Over the years those who have stayed in room 206 have reported the unnerving sensation of being watched. While others have reported seeing the sad apparition of the famed poet plucking away at his portable typewriter forever writing from the other side.

Janis Joplin, a frequent guest at the Chelsea Hotel was once overheard saying, “A lot of funky things happen at the Chelsea.” And it appears she was right. Today, the doors of the Chelsea Hotel are closed to guests, but film companies still use it for the occasional movie or TV production. If you’re looking for a piece of pop culture history The Chelsea Hotel can be found at 222 W 23rd Street, New York.