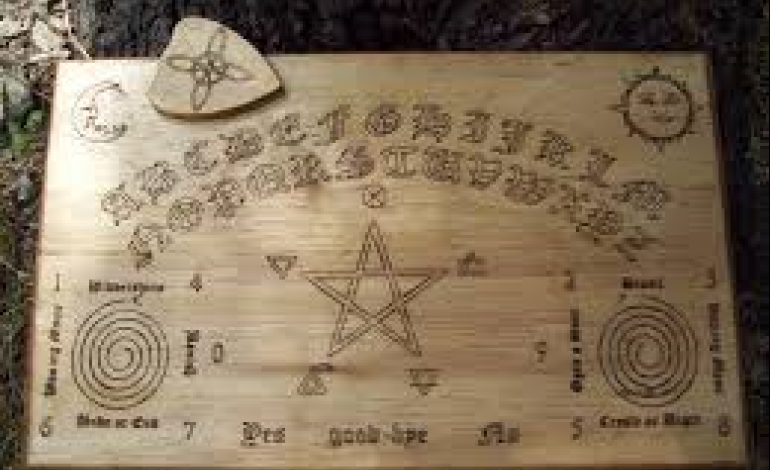 Janie, Mark, and Laura had decided to have some spooky fun on a Saturday night. The three friends gathered at Laura’s apartment and, with the radio up, indulged in a few alcoholic beverages and soon were more than a bit tipsy. Just as Laura turned the lighting to a dim glow, Mark reached over and turned the music low. A slightly eerie tune vibrated through the room.

“You guys want to get spooked?” Laura said as she retrieved a box from her closet.

“I don’t know…those things creep me out.” Janie said, realizing the box contained an Ouija board.

Soon the three were using the board to try to talk to ghosts. The stylus moved from spot to spot seemingly answering their questions. All it took was for one of the players to drag the stylus from one spot to another to make the others believe something supernatural was happening. As it turned out, the three friends ended up having a self-made chilling night with no real spiritual presence.

On another side of town, two ‘would be’ ghost hunters crept into a gated cemetery with a few basic electronic devices often used by paranormal investigators. Their desire to make contact with the other side was quickly noted by numerous spirits and entities, good and evil, positive and negative. While the novice ghost hunters had very few, if any, actual paranormal experiences…the invitation was given and contact was made. A negative energy attached itself to one of them and was brought home.

The weeks, months and years to follow saw the slow decline of this individual’s mental and physical health as well as misfortunes of every kind. A never ending string of bad luck followed him until he found himself unemployed, homeless and became so ill that he eventually died from pneumonia alone in a homeless shelter. No one ever attributed his decline and demise to his visit to a graveyard on a fateful fall night, and therein lays the danger. If it is not recognized, it is not validated… if it is not validated, it is dismissed, and so the cycle begins again for another poor soul who does not know any better.

Everyone has been warned over and over about the dangers of using the Ouija Board, hell, there was even a movie made about it, but how many novice paranormal investigators and thrill seekers often willingly walk right into situations with a far greater potential to be dicey. Here is the problem, in a nutshell: When a person or group of people willingly uses the Ouija Board, they are choosing to open the door between this realm and ‘the other side’. That in itself is frightening enough for anyone who is not well versed in the paranormal, but when the ‘game’ is finished, that door is left open. Any spirit or entity may stroll through the gateway at any time of their choosing once it is opened and allowed to remain open. Simply putting the cardboard cover on the box does not close this door. It takes someone who has an understanding of this and how to close the door to end a potentially disastrous situation.

While this is a chilling thought and can become a living nightmare, in a benign setting there is little or no danger at all. When someone intentionally seeks out a haunted place, such as a cemetery, to have an experience or encounter, the risk becomes exponentially greater. A novice paranormal investigator may use any number of tools to attempt to communicate with the dead. No matter what the tool, be it the Ouija board or an emf (electromagnetic frequency) detector, it is the willingness to open that door that poses the threat, not the tool itself. When you open yourself up to that possibility and desire to make contact, you have suddenly invited whatever may be near into your world and your mind. Without the proper knowledge and experience, the situation can quickly escalate to a very volatile state of affairs. Once something has been (often unknowingly) given your permission, it can attach itself to you and an ‘attachment’ can be nearly impossible to free yourself from.

My advice to you is this- Keep yourself protected, keep your guard up and as always… keep your eyes and mind wide open.