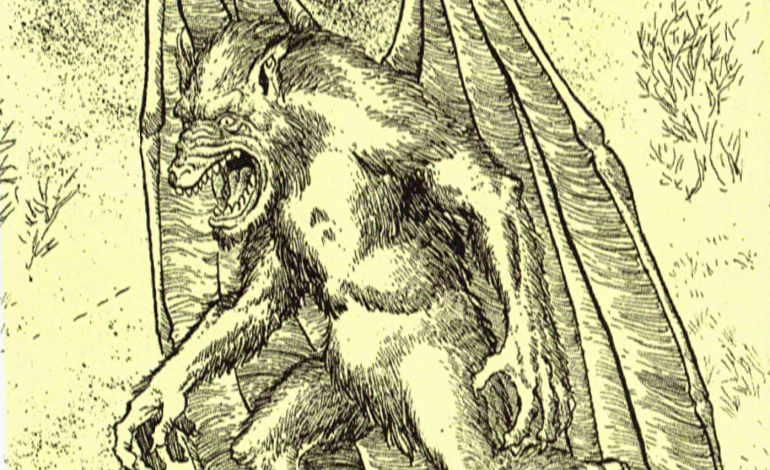 ​Since the 1980s, residents surrounding the majestic slopes of Mount St Helens, and those who dare challenge the elements and ascend its unforgiving terrain, have reported seeing a bizarre and terrifying creature flying in and around the mountain. Those who have seen the winged monster provide the same description. A nightmarish beast that would terrify even the most diehard horror fanatic. A creature that would make evolutionary biologists sits up and takes notice.

Those who have witnessed the impossible creature describe a large purple skinned monster with piercing red eyes, leather wings and dagger sharp claws at the ends of its bony fingers. Witnesses who have seen the creature up close report that the face does not look like the face of any known bird, but rather that of a very violent and determined gorilla. And those unfortunate to have laid their eyes upon the creature and hear its eerie growl, have given this winged Terror a name closely resembling that of another mystery beast said to haunt the peaks of the mountain. They have dubbed the winged horror, Batsquatch, and the residents all agree that Batsquatch scares the hell out of them.

For over two decades, Batsquatch has been seen swooping from its hidey hole among the cliffs of the mountain. Those who live in the area know all too well to keep small livestock and their family pets indoors at night. If they don’t they know that this horror would carry them away in its blood stained claws as a midnight snack.

The local Native American tribes tell Tales going back many centuries of small children being spirited away in the claws of this sky devil. It is because of this creature that Mount St Helens was considered a place of evil and terrible spirits and blood thirsty creatures of the night.

As with any beast that populates the crypto-zoo, can we know for certain that there is any truth to these stories? Apparently there is. In 1994, mountaineer and extreme sports enthusiast, Butch Whitaker, was preparing to scale Mount St Helens when he was startled by an eerie sound from a ledge a hundred feet over his head. When he looked up his attention was drawn to a creature that should live only in nightmares. Ever the mindful adventurer, Butch, whipped out his camera and snapped off a few pictures of the disturbing creature. Although the figure in the fuzzy photos look like a big purple blur, believers feels they are best evidence to date

1994 must have been the year for Batsquatch sightings. Later in the year, a second climber had an encounter with the flying monster. He watched as the creature tried to fly across the road and was struck by a speeding semi. A few moments later a second Batsquatch swooped down and carried its injured companion away. The climber got the impression that the second creature cared for the first like it was its child.

Although Batsquatch may seem like a unique one of a kind creature, Mt St Helens is not the only home for this terrifying beast. In his 1923 book, ” In Witch bound Africa”, world traveller, explorer and all around neat guy, Frank H. Meiland briefly spoke of winged nightmare that kept the local tribes in fear.

While traveling in a remote area of Africa, Meiland heard anxiety inducing Tales Of giant, red skinned flying beasts with leathery wings, fangs and an incredibly nasty disposition. This creature called Kongamoto, is said to take flight as the sun dips below the horizon. The kongamoto is said to swoop silently out of the sky and carry off not just animals but humans as well. Needless to say, children are kept safely inside when dusk approaches.

Intrigued by the stories Meiland showed local tribespeople a picture book with illustrations of prehistoric animals. The explorer was shocked when they pointed out that the Kongamoto was a pterodactyl, a flying dinosaur that died out over 65 million years ago. The explorer became convinced he had stumbled into some lost world when the locals pointed out other dinosaurs that survived the great extinction and called the jungles of Western Africa home.

Thousands of miles away in another “lost world”, Java, a third creature closely resembling Batsquatch is said to call their forests home. The creature that has been more heard than seen derives its name from its eerie call the Natives hear at night, “Aaa-hooolll.”

Those who have seen the Ahool, described it has having the body the size of a 2 years old child, a 10-20 foot wingspan and tusk like teeth. Just like its kin in America and Africa, Ahool has been witnessed making off with small animals and children in its claws. Javans very rarely talk about the Ahool, especially with outsiders, as talking about it is believed to invite misfortune and death.

What are we to make of these very similar creatures? Are they nothing more than superstition stories told to keep naughty children in line? Or is it possible that creatures said to have died out tens of millions of years ago still live among us making the night an unsafe place to be?