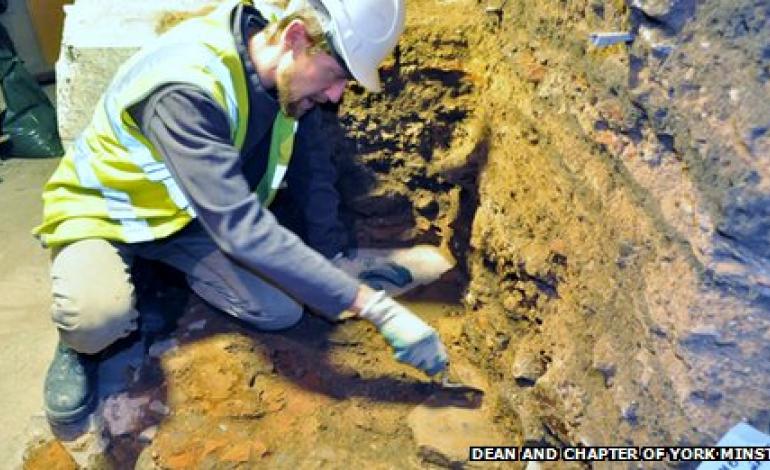 What is Stone Tape Theory?

Many paranormal investigators talk about the phenomena that is best described as a playback of events gone past. Somehow recorded into the very fabric of the environment and is played back much like a video. This type of haunting occurrence has been dubbed the Stone Tape Theory.

To illustrate this, a prime example would be the Roman legion who allegedly emerged through a wall. Seen by apprentice plumber Harry Martindale, in the city of York in 1953 whilst installing a heating system in the Treasurers’ house. Stunned at the sight of a horse with a mounted soldier, followed by more soldiers carrying swords, shields and spears. Harry was always keen to say they appeared in his account to be walking on their knees. Not to his knowledge of the time, turned out about 15 inches/38 centimetres below the floor of the cellar was in fact a Roman road used for and leading to the Minster. The ghosts walking on the familiar road and level of their knowledge unaware of the present change.

Recording ghosts can be associated with anniversary hauntings, phantom hitch-hikers and phantom battle scenes in their nature. Where at a particular location allegedly on the same day every year or maybe another pattern occurrence such as a phase of the moon or stood in “x” place. Witnesses claim the experience repeats. Investigators perhaps should be staking these places out either to rule out the myth or to gain proof of its occurrence.

Sir William Barrett, one of the initial founders of the Society Of Psychical Research spoke of recording ghosts.

“In certain cases of hauntings and apparitions, some kind of local imprint, on material structures or places, has been left by some past events occurring to certain persons, who when on Earth, lived or were closely connected with that particular locality; an echo or phantom of these events becoming perceptible to those now living.”

How does the recording occur?

Looking at a number of the hauntings that are alleged to have occurred. Many ghosts appear to be going about their business as if still alive or at the moment of death. Monks walking the abbey halls, soldiers marching for war to the replaying of their deaths.

How would the information be encoded into the environment to last centuries? As in the tragic case of Braemar Castle in Aberdeenshire. Where the newly wed wife of the Earl, after consummating the marriage awoke in the morning to find her husband gone, fearing she had been rejected. The young wife threw herself from the tower. This is said to play out as a recording if a newly wed couple stay at the castle. The Worlds End, Ecton, A phantom nun is also said to appear every Halloween at midnight on the road outside near where the village gallows used to stand and she stops anyone attempting to pass. With reports going back to the 1700s.

Speculation at the round tables, is that perhaps peak experience emotion (PE) could play a part in causing the residual echo that is seen to be replayed. An incredible emotional level, the intenseness of ones whole life passing before their eyes. Utter concentration on staying alive, on reaching out to loved ones… Those who claim near death experience often speak of the clarity of a moment, a sensation of zen. A oneness with all. Whilst it is very likely this being part of the minds self defence mechanism for keeping the brain safe. Could this mind state be the catalyst?

With reports which on the surface appear to be genuine experiences and of which there is something of a theory that seems to fit. The evidence of how it is being done is only speculation at best.

Do certain situations or mind states have to be the same for the recording to play out?

Drivers on the same stretch of road, being a newly wedded couple at the aforementioned castle to indeed standing in the exact spot as a witness to a death.

If this were to be the trigger. we would have a repeatable exercise in which to observe and the case for the existence of ghosts and echoes of the past would already be solved as a certainty.

One of the aspects I’ve spoke about at the presentations and live talks we have done, looks at the technological applications this would indeed unlock should we discover the medium.

Consider this… the Stone Tape Theory phenomena when experienced is actually that of a 3 dimensional figure of mass in an environmental space. Frequent conversations with those who claim to have been witness to these occurrences. “They were as clear and as solid as you are.”. These ghosts are indistinguishable from a real person.

We could be talking the ultimate hologram here! Especially where interaction is found, as is highlighted by phantom hitch-hiker reports. Where the person/ghost is alleged to actually click open the car door, has mass when they sit down, sometimes even speaks. Only to disappear a short way on.

Unfortunately there’s no answer on how we press record or let alone even hit play… however there’s some really interesting leads to what may be going on.

The Water memory theory holds some footing in some science circles, lending potential to the water tape theory as discussed by Para Science. Where it has been observed and recorded that water has the ability to hold information though this is disputed. A number of notable scientists and theorists have concluded separately in their respective fields of expertise. Where water can be used as a medium for information storage and an interactive element of mental influence.

Light makes for a terrific carrier of information, witness the prevalence of fibre optics in telecommunications. Photons are hyperactive, zipping around at light speed.

In his book Robot, Hans Moravac discusses how low energy photons store information theorized to be one megabyte in a single hydrogen atom and indeed ten billion megabytes in the small structure the size of a virus. Our visual receptors, our eyes, take in light from everything we look at. Which is taken in and processed by our mind to give us the vivid images of the environment we see.

In the past decade, it has been discovered the human eye also emits photons and our bodies emit biophotons. There is a two way process occurring of light being received and emitted. Packages of information scattered and directed out into the surrounding environment.

Is it therefore possible, just to throw it out there when an individual has the experience of observing or hearing an apparent ghost, might they may be taking in a photon(s) emitted by someone else, with the information being carried by the photon? Which may account for sightings, where only one person sees the ghost despite numerous people being present. The jury is out on whether or not photons degrade. As it is travelling at the speed of light, we presently can’t keep up with it to observe this. So photons containing the information could speculatively last forever

Magnetic fields surround us throughout our daily lives. We also generate our own resonance, which is measurable. Consciousness is a measurable frequency. The acknowledged speed that the EM field of the brain traverses the caudal–rostral plane of the cerebrum in the brain every ~20 ms. Travelling at 4.5 metres per second divided by a typical human skull circumference of 6 × 10-1 m (60 cm) gives the value 7.5 Hz. Our brain has a magnetic resonance around 7hz. Which is a curious frequency, as it mirrors the resonance frequency of the Earths own ionosphere.

His lecture entitled “No more secrets” discussing scientific observations and data in the field of communication between individuals at a distance and also demonstrating how the EM fields of the individuals brain show interesting parallels of symmetry – brain wave activity and patterns, which begin to mirror one another. It is at this time somehow an information transfer occurs, access to the others memories. This happens at the 7hz range in the hippocampus, “the gateway to memory”. How this is theorized to occur, is entanglement. With the information conducted into the magnetic field, could it be that person A standing in and about in the same area. Perhaps the trigger being a the similar mind state, perhaps at the exact frequency as the time of the original event. The field gives person A not the outside apparition, but the projection into their mind.

To elaborate; the apparition however it is sensed… if it is real? I draw upon a quote from the film The Matrix spoken by Morpheus to Neo


“What is real? How do you define real? If you’re talking about your senses, what you feel, taste, smell, or see, then all you’re talking about are electrical signals interpreted by your brain.” Our senses are the input to which our mind interprets the experiences we are having. However they it is well known animals notably birds use the magnetic fields for navigation and orientation. In the studies to understand this process looking for a magnetic receptors, gene expression markers have identified several brain regions activated by magnetic stimulation, neuronal responses to field direction, intensity, and polarity; With findings demonstrating a neural magnetic sense. Comparing these notes to the human neurological studies, as humans we have similar sense to electro and magnetic input. We are highly susceptible to the em fields.

If we are exposed at the same frequency, or have the same present em field frequency occur in the mind and we exist in the same space. Could there could be an exchange of information?

The difficulty in understanding this is people and creatures have walked the Earth for thousands of years and we now occupy more of it than ever before. So this experience should be occurring far more often. People should be witness to this very frequently. But do we have the same mind set often enough as people from the past to enable the view to occur?

Could this be the mechanism behind the “Stone Tape Theory”? A field with information stored could be putting the impression into the mind of the beholder.

Truth is we simply presently do not know, we have to keep looking.

http://www.timetravel-britain.com/articles/history/ghosts.shtml – The Ghosts of York.

http://pages.gseis.ucla.edu/faculty/bates/substrate.html THE INVISIBLE SUBSTRATE OF INFORMATION SCIENCE Journal of the American Society for Information Science 50, #12 (1999) 1043-1050.

Living systems give off measurable intensities of light, i.e. photons in the visible part of the electromagnetic spectrum.

Neural Correlates of a Magnetic Sense