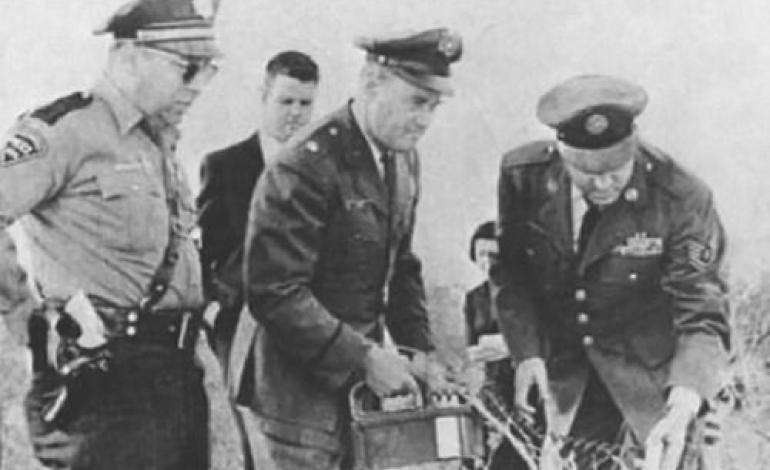 Sceptical UFO investigators feel it’s easy to dismiss a sighting of UFO claiming that most sightings are made by so backwoods Billy. However, it is not so easy to dismiss a sighting when it is made by a person who is a trained observer of the physical world and a keen investigator criminal behaviour. Such was the sighting and report made by New Mexico, police Sergeant Lonnie Zamora.

On the morning of April 24, 1964, Police officer Lonnie Zamora found himself in a high speed pursuit with a lead footed scoff law near the town of Socorro, New Mexico. Just as Zamora was about to pull the speeder over he heard a great roar from the Southwest and saw a dark plume of smoke and fire that seemed to light up the sky. Zamora radioed his dispatch that he would be breaking off the pursuit to investigate an explosion possibly of a local dynamite shack in the middle of the desert. Lucky for the speeder, not so lucky for the seasoned patrolman.

After trying to get his patrol car up a steep incline, Zamora witnessed something he could not wrap his mind around. Sitting approximately five hundred feet in the distance, Zamora saw a large shiny craft that looked like an egg sitting atop three legs that must have been landing gear. Zamora, watched as two figures that he described as two small adults with large heads, wearing white coveralls exited the craft. Zamora stated that it seemed like the figures were inspecting the landing site.

Over the years Zamora, had heard many stories of seemingly ordinary people witnessing such things. Usually, Zamora, just dismissed these stories as the ravings of nutjobs. But now, in this place, Zamora was witnessing the impossible, an actual landed UFO and its alien occupants. All those stories he dismissed over the years seemed wholly possible now.

After a few minutes of watching the diminutive beings, Zamora radioed his dispatch that he was in the desert just outside of Socorro investigating what he could only describe as a suspicious vehicle.

When Zamora gathered up his courage he began to drive his patrol car closer to the strange craft. As he creeped closer the little men became aware of Zamora’s car and quickly ran back into their craft. Zamora watched as the Craft’s engines ignited, letting out a tremendous roar and a bright flash of blue flame. The craft then lifted off into the sky and quickly vanished from sight.

Within hours of Zamora reporting the sighting of the egg shaped craft, members of the media descended upon the town of Socorro. Reporters from the Associated Press and the United Press reported on Zamora’s sighting of an alien spacecraft and the alien beings. The story quickly spread like wildfire throughout the world. Lonnie Zamora quickly became an international superstar; everyone wanted a piece of the police man especially the United States Air Force.

A few days after the story of Lonnie Zamora’s encounter broke officers and investigators from the Air Force’s famed Project: Bluebook, arrived in Socorro, New Mexico to investigate the alleged sighting and to question the police officer. Zamora took the officers and world famous UFO investigator, J. Allen Hynek out to the location where he witnessed the landed craft. Zamora showed the USAF investigators the brush that was burned to a crisp by the alien craft and the tracks on the ground left by the landing gear.

After investigating Zamora, putting his entire life under a microscope, the investigators discovered Zamora was not alone in witnessing the strange craft. Several others had come forward claiming to have seen a strange craft in the sky as well as the loud roar and bright flash of light in the desert.

Although Zamora had other who could confirm his sighting, the United States Air Force released their final disposition on the Zamora encounter. And predictably, investigators accused Zamora of hoaxing the sighting, because as they claimed, Zamora had an unfavourable opinion of the Air Force. At no time did Zamora express a negative opinion.

In 2009, Lonnie Zamora retired police officer and UFO witness passed away in his home from a sudden cardiac arrest. Up until his dying day, Lonnie Zamora maintained that he was telling the truth of what he witnessed in the New Mexican desert many years earlier. And despite what the Air Force said about the incident, Zamora went to his grave with a clean conscious.