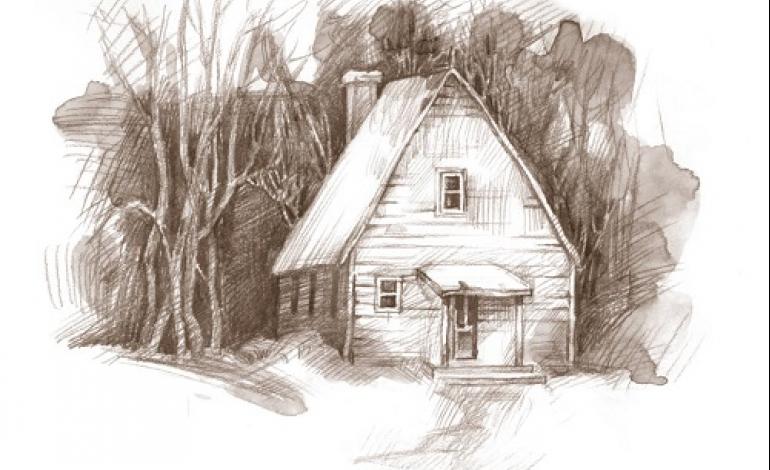 A true tale from the personal files of Lynne M. Nickerson

Where do we go when we sleep? Where is it that our spirit takes us when our bodies lie to down to rest? Do we become that will-o’-the-wisp that haunts another time? Do we slip through that membrane dividing dimensions that takes us to the past, maybe even someone else’s past? As contrived as these suggestions may seem, I had a dream of a house that prompted these very questions.

There are, for me anyway, many types of dreams: some are precognitive, some are warnings, some are visions and sometimes dreams are just that – they’re dreams. This however, is the story of a dream that doesn’t fit into any one of these categories. In fact, it might even qualify as an out-of-body experience (OBE). Nevertheless, whichever way it may be categorized, there are undoubtedly elements of the paranormal and the unexplained, with a hint of time-slipping, and just a dash of OBE.

The old Victorian house in Kittery, Maine, where I lived for six and half years, was the site of many brushes with the paranormal. I’m glad I kept track of these events because in retrospect, they tell a story of just how often I’ve been on the edge of two realities. I’m still in awe of the messages and the synchronicities. While living there, I had at least two out-of-body experiences, maybe more. On this particular night in question, I went flying around someone else’s neighborhood – I had no idea where it was, or where I went. With seemingly no volition, I took off on a trip to someone else’s house where nothing looked familiar. The house sat in the middle of a field where the far end overlooked a broad river. The field ended in a cliff which I couldn’t see but knew was there. Even though it was nighttime when the dream unfolded, it was daytime in the dream. The sun shone through a foggy haze that made the surroundings appear dream-like on this sultry summer day. Upon awakening, I recalled a great deal of detail despite the haze, although there was some sort of blocking mechanism in place that only allowed me a limited view.

The ‘dream’ house was a two-storied wooden structure, small and non-descript. There was a porch in front, accompanied by two front windows and two windows on either side. If I had to associate its style with a particular period, I’d have to say it was a cross between a cottage and a New Englander, built sometime near the end of the 19th century. It faced the river.

There were no other houses in the immediate area, and the field on the right side of the house bordered a tree line that stretched parallel with the trees all the way to the cliff. It appeared that this house lot abutting the trees had been cleared away for a direct view to the salt water river.

Bordering the front side of the home was a low stone wall, defining the front yard from the rest of the field. A short path led to the front door. Surrounding the sides and front of the house were lilac bushes, young and sparse, no higher than 5 and 6 feet, all in full bloom. I remember flying through the open windows downstairs, dodging the curtain sheers that fluttered in the breeze. I went in and out, cruising on the air drafts like a bird coasting on the wind, all the while smelling the sweet scent of lilacs. The house was unfurnished, and the floors were bare. Someone lived there but no one was home at the time. Even though there was a breeze moving the curtains, the air felt still as if movement was in slow motion while time stood still.

In New England, lilacs generally come into bloom toward the end of May to the first part of June depending on how warm the weather has been. So, the timeframe of the dream must have been late spring, early summer. However, the grass in the field had turned brown by this time, so spring must have come early that year. I don’t know where this house was, who lived there, or how I was connected to it, but I was comfortable being there like slipping into an old memory.

When daylight came, I woke up wondering why I dreamed of this house in particular, knowing full well that I had never been there, and very curious to know where it was located. The dream occurred in 1991, one year before I made the decision to move out of the Victorian and find a small affordable place to buy.

Fast forward to May of 1992 – I was on a mission. I went house hunting in New Hampshire and found the quaint little section of Portsmouth called Atlantic Heights, located on the south side of the Piscataqua River, the dividing line between Maine to the north and New Hampshire to the south. I was ecstatic because I was so drawn to this little village of post-World War I cottages. I scoured the neighborhood looking for the right house to buy and settled on a half-duplex apartment which offered a rent/purchase option. However, I digress, because the second most important find during this search was locating the house in my dream! Tucked away on one of the side streets at the fringe of this village sat the house, now nestled near a couple of newer buildings, but still facing the river; it was the house. I was positive. Most remarkably, the low stone wall was still out front with the center walkway leading to the front door. Plus, the lilac bushes were still there! They had grown considerably and were all in full bloom just like in the dream! Such an uncanny feeling washed over me. Even without knowing the significance of the house, I was happy just to have found it. At the time of this discovery, someone was living there and I inwardly fought to balance respect against adventure. I wanted to knock on that door and ask for a tour, but respect won out so I didn’t go knocking. I talked myself into thinking that there’s always tomorrow; I’ll see it another day.

Still, I wondered, why this house, so unassuming and non-descript? What brought me here or rather what directed my spirit to come drifting in and out of the windows of a house from another time? It was perplexing to say the least.

Once I made the move into the neighborhood, a year had passed since the dream. I rented the half-duplex for almost two years when a place across the street came on the market. I decided that this latest option would be the better of the two. The sale went through quickly and I moved in by January 1994. During the first few months of living in my new place, I became acquainted with some of the neighbors who had lived in Atlantic Heights for many years. I decided to inquire about the ‘dream’ house now located a block and a half away. One of the men knew part of the history connected to the property and told me that an older lady lived there alone for many years, and then one day she won the lottery! She put her house on the market and moved to Florida!

Sometime in 2007 after having been gone from the area for nearly 10 years, I got curious about the status of ‘my lottery house’: what it looked like, was it still standing, and whether or not someone had made major changes to it. I refrain from using the term improvements because to my way of thinking, you don’t destroy the integrity or design of an old structure. It should either be repaired or supplemented with living space synchronous to the original period. By 2007, it hadn’t changed much. By 2013, it was almost unrecognizable. However, even with the modifications, I still felt compelled to tour the house to compare its interior with the views from both of my realities: the now and the OBE. I don’t know who the present owners are, but just maybe someday I’ll get to go inside, and eventually fit all the pieces of the puzzle together. Maybe it was the joy from this woman’s experience imbued on the environment that I picked up on, but that leads to the question: why me and why this house? All houses retain some kind of energy so what was the dynamic at work here? I guess there’s just no simple answer at the moment. It’ll just have to be pondered for a while.

Upon reflection, I have no explanation as to why that house chose me to show itself to, or why that ‘dream’ took me to someone else’s past. It was like revisiting an old memory that was somehow not my own, and I half suspect that the story isn’t over yet. What I can be sure of though, is that it’s another wonderful mystery in God’s great Universe that holds unexpected pleasures… like winning the lottery, for instance!