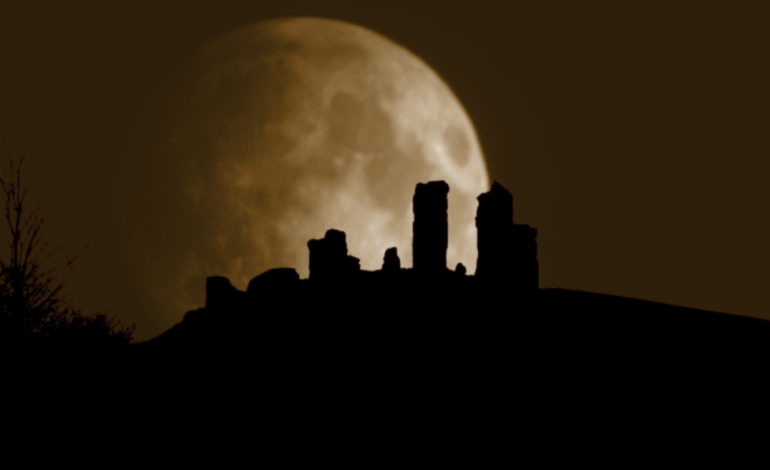 It has often been noted that certain celestial and weather phenomenon seem to heighten paranormal activity. The question at hand is whether or not these things actually raise the amount or intensity of the activity, or if it is merely a heightened awareness that we have due to certain triggers that are a learned reaction. The other possibility is that there are no changes, only the belief that the effects occur to to the over stimulated grey-matter in our heads. Let’s take a peek at a few of the most common situations and what the possible effects if it may be…and I will save the best, and probably most common, assumption for last.

The entire world around us feels a bit more chilling and eerie on a cloudy and cool fall night when a full moon looms overhead. Some of the first thoughts most of us would have pertain to werewolves and black and white horror movies, but why would this make anyone think paranormal activity would be stronger during a full moon? The specific aspect of a full moon that tops the ‘creepy-meter’ for me personally is the visual. Sunlight reflected off of our moon casts a blue/gray glow on the earth around us and this unusual lighting often leads to illusions, or our eyes playing tricks on us. It also adds the slightest hint of natural lighting to interior spaces too. A dark and spooky, abandoned building seems even more eerie when moonlight creeps in through the window panes.

Other than the visual, other things should be considered. It has been proven in every way (besides scientifically) that something known as lunar madness occurs during a full moon…hence the term ‘looney’. You can ask anyone in law enforcement or the healthcare field, especially E.R. workers, and they will tell you, “When the moon is full, the crazies come out!” This does not only affect humans, but many animals which become much more active during the full moon, i.e. coyotes and wolves howl more during the full moon cycles, deer travel more, even racoons and opossum are more troublesome.

The moon has the power to affect our gravity, causing the tides, which in itself is an amazing concept to consider. All of these things being taken into consideration, it could be possible that the effect of the full moon on the oceans, animals, and people could also affect the energies of spiritual being as well, perhaps increasing their energy in ways we do not yet understand. (The same consideration could be given for other astrological occurrences as well)

Let’s consider the opposite: a hot, sunny day with people all buzzing about their lives, having cook outs, visiting the pool or the local park, easing into a warm evening…cloudless and starlit. It paints a nice picture, and it does seem, from a paranormal investigators point of view, that unexplainable activity is lessened at times like this. It could be as simple as people being generally happier, creating more positive energy, thinking less about, or paying less attention to the phenomenon that occur around them, and the fact that there are generally less waking hours when the sun is not shining. It is certainly conceivable that the overflow of positive vibes and energy could calm the spiritual world around us, and even subdue some poltergeist activities…but much like the full moon scenario, it could simply be our state of mind and our choice of perception.

No matter if it is spring, summer, autumn, or even winter, (we have been hearing more and more about the phenomenon of ‘thunder snow’) an electrical storm would have to be one of the more frightening weather related phenomena that we experience. It also has been associated with numerous ‘scary movies’ and strong paranormal activity. It is a common conception that the atmospheric charge which causes lightning fuels activity. It also is assumed that battery drainage is caused by spirits wanting to obtain more energy in order to communicate or manifest in some way.

I would pose this question… If that were the case, why would they not gain energy from the nearby electrical outlet? The answer may be simple. Batteries contain a DC, or direct current, charge, while an outlet contains an AC or alternating current. Perhaps it is in the type of energy, batteries being a stored energy. Why then would we assume that an electrical storm would raise the amount of supernatural phenomena, being similar to the AC type of power? When lightening strikes, there is an atmospheric charge within a certain radius of the strike. I have experienced this first hand, being only a couple of dozen feet away from a lightning strike on two separate occasions.

In each instance, every hair on my body, including my scalp stood on end and my body tingle all over, much like touching an electric fence. It now seems feasible that if this type of energy was discharged into an area, it would grow weaker, but being on a widespread, dissipated level, it may very well be attainable, or usable, by supernatural forces…spirits, ghosts and poltergeists. If this is true, could you imagine what would happen if a spirit could actually connect and draw energy directly from an AC power source?

Imagine if a spirit could draw it power from tuning in and connecting with a bolt of lightning? How powerful would that entity become, and how impressive and frightening would its manifestations be? If this is possible, and I firmly believe it is, it could explain why activity is stronger during electrical storms and perhaps even explain why some hauntings will go down in history as being terrifyingly active while others tend to be more of a nuisance and just a bit unnerving.

I have actually experienced this type of haunting, and will share some theories of the science behind it and experiences of mine and my team when I continue this article next month. If you can’t wait that long, you can read about it, in-depth in “Forever ASH” the first book of my trilogy.