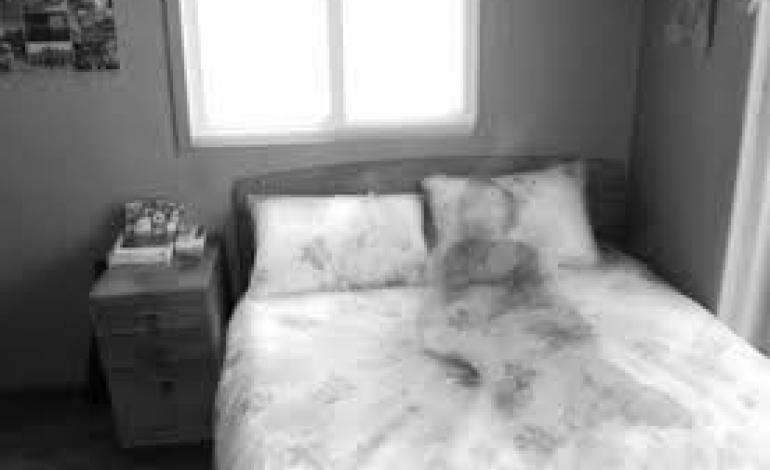 We continue with our report into our society’s research into a poltergeist case that affected 3 houses joined together in the town of Sauchie (pronounced Saw-Kay) near the town of Alloa in Clackmannanshire Central Scotland. We now learn of the local Alloa Christian Spiritualist Church involvement with this case.

Probably one of the strangest things that occurred in Cindy’s house was the day when Cindy’s mother happened to spend the night. The mother was downstairs in the kitchen making a cup of tea when she saw her daughter Cindy walk down the stairs in a flowered night gown. She asked her daughter as she was descending the stairs if she would like a cup of tea to which her daughter did not respond, indeed the daughter coming down the stairs, stopped, then turned round and went back up the stairs. Later the daughter came back downstairs to which her mother said, “Hey, why did you not answer me when you were coming down the stairs”? Cindy replied, “But I’m just up, I just got up this second”. Cindy’s mother went on to mention her daughter’s night gown to which Cindy replied, “But mum, I haven’t got a night gown like that, I don’t own one like that” So we have to ask ourselves, if that wasn’t Cindy coming down the stairs, then who was it ! We’ve heard of Doppelgangers which is someone that looks exactly like you and has been known to disappear, was that the case here? Was Cindy just sleepwalking and didn’t know it, but if so, where did the night gown come from if she states that she doesn’t own one? We also learned in our Investigation that strange ‘growling’ noises were heard coming from a cupboard in Cindy’s home, a noise that she never investigated.

After taking notes of all the recent strange occurrences, I asked Cindy if we (SPI) could spend the night in the family home to see if we could document these effects ourselves, this request was accepted and so my colleague Kevin Cole and I arranged to spend the night there the following evening. Upon entering the property, Kevin and I began to set up our equipment. We were all alone in the house as the Hope family had gone next door to be with the Peters family and the other family to give us free reign of her property. We decided to set up most of the equipment in Marie’s bedroom which we were told, was the chilliest room in the whole house (even in the summer) But before Kevin and I sat down for our night time vigil we decided to check the loft space of both Cindy and Elaine’s house. So with some trepidation we gingerly entered the Cindy’s loft and that was spooky I can tell you. (We Investigators are no heroes I can tell you!) And with our flashlights we looked in every nook and cranny. We didn’t find any hidden devices that could make these banging noises, nor did we find any birds’ nests that could account for birds getting in to the loft and making noises. We also never found any evidence of any mice or rats which could have made scurrying sounds in the loft which might have been misconstrued as something else. It was just an ordinary loft which contained the usual bits and bobs of household junk. Satisfied, we quickly (and I mean quickly!) got out of the loft and went next door to do the same in Elaine’s loft.

Sadly we didn’t see, hear or sense a thing on that particular night which I must admit was most disappointing. In the morning, we were joined again by all three families where they were disappointed to learn that we hadn’t seen anything. (They were probably not as disappointed as us)

THE EMPTY AND LOCKED ROOM

I then took the decision to take the Hope family and some members of the other families, along to my local Spiritualist Church in Alloa to see if they could help. The Alloa Christian Spiritualist Church meetings are held in an upper room in the Alloa Town Hall. (I must state that I gave the Church committee members minimal details about what was going on as I was hoping that at a later date we could perhaps get some of their psychics to attend the houses). I had to leave later that night as I was working at the local Glassworks which was a bit of a pain but there you go. The following day I took a phone call at home from one of the ladies of the church who stated excitedly to me that 10 minutes after I had gone, loud banging noises could be heard coming from above their heads. They knew that above their heads was a locked room so they all got up out of their seats went upstairs and peered through the two oblong windows of the door into the locked room. Everything was in order, there was nobody there. The noises had stopped. They tried the door handle, it was securely locked. They all then trooped off back downstairs, sat in their seats, and no sooner had they done so then all hell let loose again, banging’s and thumps coming from above their head. There were also sounds like falling stones falling down between the walls of the building. They jumped up off their seats and raced upstairs only to be met with the same sight, a locked room and nobody there. The family explained to the church committee people that this was nothing unusual these types of crashes and bangs were a regular occurrence in the family home. The committee members stated to the family that nothing like this had ever occurred in the Alloa Christian Spiritualist Church before whereupon Cindy smiled and stated, “Well this type of thing goes on all the time back at our house”.

In our next and concluding part of this amazing poltergeist case, the case takes a new and unexpected twist which see’s Malcolm also being assaulted!