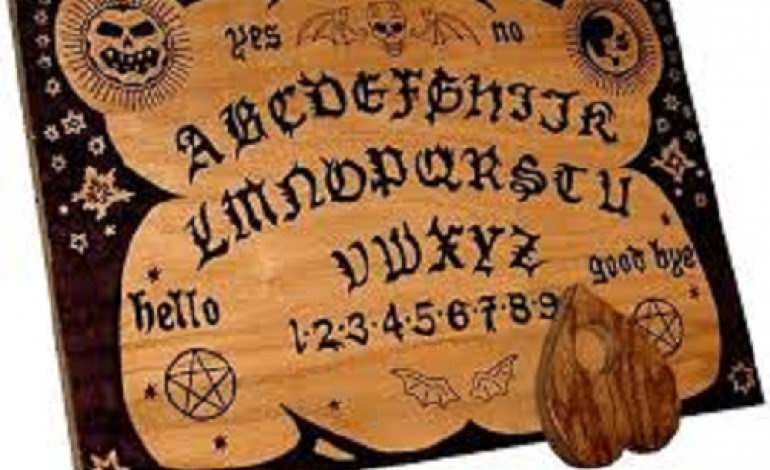 A Ouija board is a flat board marked with the letters of the alphabet, ‘yes’ and ‘no’ and the numbers 0 to 9, sometimes with “hello” and “goodbye” as an extra adage. Over the years symbols and art have been added to personal and commercial designs. A Planchette is used as the communication tool, this is a movable indicator to spell out the Spirit’s message on the board during a séance, and sometimes a heart or triangular shaped piece of wood or others prefer to us a glass. Participants place their fingers on the Planchette, and it is moved around the board, by the Spirit to spell out words that they wish to communicate. Also known as Spirit Board, Talking Board and Angel Board, all in principle are said to open a portal to the next world.

One of the first mentions of the use of communication with the Ouija Board was found in historical documents dating back to 1100 AD in China. The Ouija Board fell into the commercial world after the introduction by businessman, Elijah Bond in 1890 and was regarded as a harmless Parlour Game. In 1901, William Fuld started production of his own Talking Board under the name of “Ouija”, the name came from a combination of the French and German words for “yes”. He claimed that he had invented the Ouija Board, himself and disregarded any previous history. Fuld passed away in 1927. 1966 brought the entire business was sold to Parker Brothers, which was sold to Hasbro in 1991, and which continues to hold all trademarks and patents.

Religious criticisms of the Ouija board have come from Christians, primarily in America the United. 2001 brought the burning Ouija boards in Alamogordo, New Mexico by groups of protesting people, along with the Harry Potter books which were seen as “symbols of witchcraft”. Expressed beliefs sat that the Ouija board reveals information which should only be on God’s hands, and thus it is a tool of Satan. Human Life International described the boards as a portal to talk to spirits and called for Hasbro to be prohibited from marketing them. It has been reported that Ouija Boards are still for sale some stores of Toys’R’us.

The Ouija is criticized by scientists and sceptics alike as a pointless exercise because movement is related to the ide motor response. Studies have recreated the effects of the Ouija board under controlled laboratory conditions. Subjects were moving the planchette involuntarily but it was noted that messages spelled out by spirits were similar to what the subjects were thinking. According to Terence Hines, Professor of Neurology says;

“The planchette is guided by unconscious muscular exertions like those responsible for table movement. Nonetheless, in both cases, the illusion that the object (table or planchette) is moving under its own control is often extremely powerful and sufficient to convince many people that spirits are truly at work… The unconscious muscle movements responsible for the moving tables and Ouija board phenomena seen at séances are examples of a class of phenomena due to what psychologists call a dissociative state. A dissociative state is one in which consciousness is somehow divided or cut off from some aspects of the individual’s normal cognitive, motor, or sensory functions.” Pseudoscience and the Paranormal (2003).

Psychiatrist Dr.Carl Wickland documented, in 1924 that he had treated the cases of several persons whose seemingly harmless experiences with the Ouija Board resulted in wild insanity that commitment to asylums was necessitated. There are many threads and links to depression or mental illness being associated with the Ouija Board and any form of spiritual contact though hard to prove. Some believe this to be coincidence, others think it is all related to improper use of the board and some medical professionals think this is a truly a mental illness of the mind and the use of a Ouija Board would have made no such difference.

Because of religious views, bad experience and scientific testing there are many views on the Ouija Board. Some people saying that they should never be used and others fighting the spiritual communication corner by insisting that the boards are finding opened in the right hands of experienced users.

Julie Ann: I used one and it didn’t do anything. Anything can be dangerous if not used in the right way and with the right understanding. I don’t feel they are to be used lightly for a laugh.

Patrick Bishop: The other tools utilized by paranormal investigators typically consist of technology that observes & records the phenomena of interest. The thing that makes Ouija Boards a bit risky is that the investigator becomes PART OF the instrument; it can’t work otherwise. What I have observed is that while most users of Ouija Boards never experience anything negative, whenever I interview people who are encountering very negative entities in their lives, I often hear the phrase, “It all started with an Ouija Board…” I’ve heard this so often, I can nearly predict when someone is about to say this. I refuse to use Ouija Boards.

Rachel Amos: My sister used mine without me and the spirit got mad. It told her that he or she was going to hurt my Uncle. 2 minutes later we got a call and my uncle had flipped his truck and almost died. She never touched my Ouija board again.

Bryant Capuano: I had black shadows around me in a cemetery and a demonic growl happen from using an Ouija board and plus wrecking my car.

Strangely, when asking for people’s opinions and experiences whilst researching for this article, only people who had experienced ‘something’ were giving opinions and stories. It seems that perhaps some sceptics are not willing to even partake in a séance to find out if an Ouija Board really does allow the dead to communicate with the living. “Is there any point?” a non-believer would ask and in response, one who has had an experience would say be cautious when doing so but a few brave and others wise of the tricks of a Ouija Board would say yes under the supervision of someone experienced in holding a true séance but others will give a point blank no. It comes with the board that there are not really any right or wrong beliefs and each has their own views about the spiritual connection it offers. What does seem apparent is that any use should be done with caution and under the advice of others it is important to do with the guidance of someone who is experienced in this field.

Do you still want to try using Ouija Board?