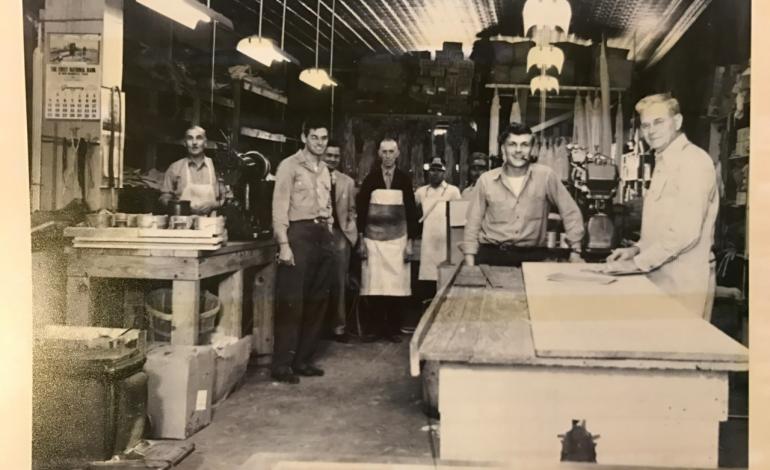 Red Miller worked at Ludwig and Marglin for about a decade around the 1970s before passing away from a heart attack. It’s unknown where Red is buried. Now his spirit is said to hang around the shop, occasionally tossing leather pieces around and rattling the rope cow halters he loved making in life. Red could even be the reason for the mysterious Ludwig and Marglin fire of 1982. Helen Opellt, who has worked at the shop for over thirty years, says she’s witnessed some of Red’s antics herself. “He doesn’t like it when I make the cow halters,” she says. “That was his favorite project.”

Paula Cerna told many tales of Red and would always say, “That was Red, alright!” when mysterious things happened around the shop. Paul worked at Ludwig and Marglin Leather for over fifty years before passing away. Paul’s marble Ludwig and Marglin tooling block was made into his tombstone, per his request. “With seventy-nine years of history, I wouldn’t be a bit surprised if we had a ghost around the shop,” says Ludwig and Marglin owner Terri Cocanougher. “Luckily for us, Red is a friendly ghost.”

Ludwig and Marglin’s first Haunted Pub Crawl will take place on Saturday, August 19, 2017 from 6-9 pm. The tour meets at The Lone Star Lounge at 5:30 pm. The Haunted Pub Crawl visits five bars in downtown New Braunfels. Participants will hear tales of each bar before they enter as well as true happenings from events long ago in our town. Participants must be at least 21 years old. For more information, visit nbghosttours.com.

New Braunfels Ghost Tours is a historic ghost walk through downtown New Braunfels. That tells the spooky tales and history of the one hundred and seventy-two year-old town. Participants learn about ghosts, haunts, and murderous legends that would find in the history books. Ghost Tour tickets are $20 and Haunted Pub Crawl tickets are $30. For more information, visit nbghosttours.com.