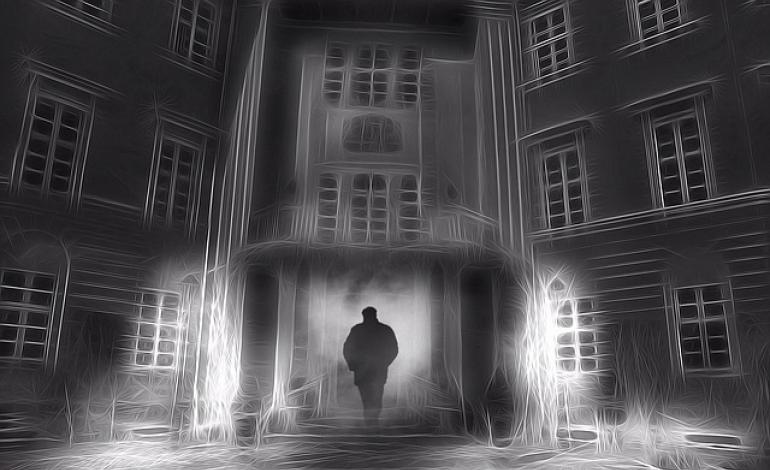 Spirit and spirit don’t mix or so they say, but in this instance we had to think twice. The Horns Public House, nestled in the heart of the Cheshire countryside, had for some time been experiencing some rather strange and unexplained occurrences. For most of the time the staff were not too bothered, but when glasses started to break for no reason, and loud noises were heard coming from upstairs when no one was there, they decided to get it checked out.

The building is very old, a farmhouse and inn dating back to the 1700’s, so of course allowances have to be made for its age. As soon as we entered the building, we knew without a shadow of a doubt that we were being watched by an unseen presence.

Making our way up the stairs, there was a sudden whoosh of air as if someone had rushed past us and with this came an overwhelming sense of sorrow. We called out to see who it was, but there was no reply. Why such sadness, we wondered.

Whilst moving around the building the sensation became stronger, and although we tried to communicate with the spirit, we had no response.

On walking through the ground floor of the property a different spirit energy approached us. We could actually hear the rhythmic swishing of skirts as the spirit moved across the floor. Then she disappeared as suddenly as she had appeared.

We decided to try and fill the entire place with spiritual light to see if we could get spirit to communicate, to see if anyone needed our help. A female spirit came forward and explained to us that her husband and her daughter had both died one after the other, and although she had been reunited with her daughter in spirit, she couldn’t find her husband. She was so agitated, pacing up and down the room wringing her hands.

Suddenly a movement by the door caught our attention as the apparition of a different female appeared and started walking towards us. To our amazement she told us that she too had lost both her husband and her child very quickly one after the other. She said that she had happily been reunited with her family in spirit but she felt so much compassion for the other lady, she wanted to help.

Assuring both ladies that we would try our best to help them find him, we continued walking from room to room filling the entire building with spiritual light. Despite our efforts we just could not find the husband, eventually we had to admit defeat. We discussed the situation and agreed that we would try again at a later date.

We returned to the pub for a social event which was attended by the entire Feathers gang. As the evening went on we became aware that we were being joined by one or two ‘extras’, and it wasn’t anything to do with the spirits we were consuming, but we were very shortly to see spirit in a completely different light!

Jackie was randomly taking photographs of everyone having fun, when she noticed a gentleman walking from the shadows by the door that she didn’t recognise. It was only when he walked further into the room that she realised that he wasn’t “physically there” but was in spirit. He didn’t even pause but walked straight over to where Stella was sitting chatting. Jackie quickly started photographing in the hope she would capture him in a photo but she wasn’t prepared for what happened next. Stella’s features suddenly started to change and her aura seemed to get broader as the spirits energy merged with hers. Her face became thicker set as male features became imprinted in front of her face. It was extraordinary to witness, and it all happened so quickly, more amazingly, quickly checking the photos, showed that the lens had captured it all.


The male spirit suddenly got up and walked away. Checking with Stella that she was ok, we followed to see where he had gone.

There he was stood in the corner of the room with a pot mug in his hand supping ale, he had a twinkle in his eye, and told us that he liked the company of the ladies. He also told us that he knew that we had seen him and that he had seen us before. He said that he was hiding from his wife as she wouldn’t give him five minutes peace as she was very highly strung and always anxious about everything. Things started to click,we realised that this was the elusive husband we had tried to find earlier. We told him how upset his wife was, and that he really needed to let her know that he was ok. We went on to tell him that of course he had freewill, and if he didn’t want to stay with his wife, then that was his choice, but he should at least put her mind at rest so that she could move on. Reluctantly he agreed, but only after checking that he would be able to return to the pub to enjoy the company and the ale, or even a dram or two if he fancied it. Laughing we told him that this would indeed be able to return when ever he liked.

Later doing some research, the census returns and historical documents revealed that two families were dominant in the locality during the 1800’s, interconnecting with each other and owning licenced premesis which also served as farms.

Landlady Sarah Lees, had lost her first husband 39 year old Joseph Walker 2 days before the Christmas of 1836 and then her 3 year old daughter the following July. She did remarry, but outlived her second husband, carrying on as landlady until she herself died in 1864.

History was to repeat itself some years later when in November of 1883 Landlady Mary Ann Cowaps husband John, died at the age of 46 and then tragically their 7 year old daughter Amy died just a few months later. This strong individual never remarried but continued as Landlady until 1922.

The question which was never ansered was: which of the husbands did we encounter trying to hide from his wife…?