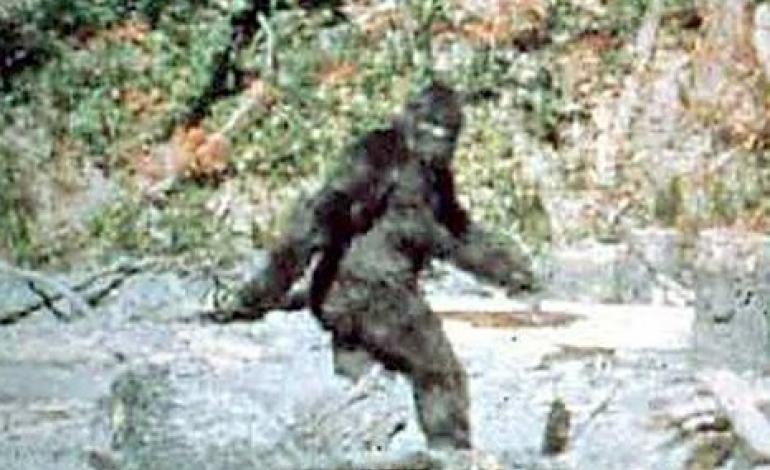 This encounter happens to be my personal account of a sighting that a friend & myself witnessed at the Northwoods of Wisconsin years ago. I wanted to share this with everyone, as l know this is a real & genuine account of a paranormal experience two people had in the late 1990’s.

A friend & myself were driving about 70mph down a county trunk highway in Oneida Co. Wisconsin on a Saturday morning in the middle of summer. It happened to be on the hottest day of the year. The temp was over 100°F outside.

As we came around a sleight bend in the road a figure came up upon the shoulder & started to cross the highway in long strides, with his arms swaying. I immediately nudged my friend who was driving the car & said “Hey look, its Bigfoot! Ha ha” in a joking manner. As l say this, my brain is thinking this must be a tall, old hunched over man carrying two 5 gallons buckets, swaying side to side in long strides as he’s crossing the road. But as we got closer l realized the colour of the “person” was same from head to toe, a light brown or tan. I also realized that what l thought were 5 gallon buckets were in fact his forearms, which went almost all the way to the ground, big & muscular. This wasn’t a bear, this was definitely a humanoid of some type, walking upright on two legs… & walking with a purpose. It crossed the highway in 4 or 5 steps, went down the shoulder & right into the thicket of smaller brush which lines the road thru the woods. I personally feel that this figure was male, as that was the impression l had.

So as we approach the spot where the figure crossed the road, my friend driving brings the car to a stop right in the middle of the highway. I look in the place where he entered back into the underbrush & expected to see a trail or a driveway & a tall, old man carrying two 5 gallon buckets. (Ha ha)... But no. There was no trail or driveway or path or anything man made anywhere in the vicinity. & there was certainly no man fumbling thru the brush carrying or swinging buckets. There was nothing. Nothing moving. Nothing. Whatever had just crossed the road had apparently vanished into thin air (so to speak) & completely disappeared.

So my friend looks over at me & asks me “So, do you want go in after it?” That thing was so big & massive, l said “Are you crazy? That thing will kill us. Did you see how big it was?” No cameras, Nothing to protect ourselves. There was no point in getting hurt.

So we drove away. All the way home we tried to explain what we just saw. We knew whatever we saw had to be suffering in the extreme heat. It was so hot & sticky out. This creature was covered in fur/hair from head to toe. Again, this wasn’t a bear. Although bears can walk on two legs, they don’t stride like people do. They walk slow & clumsy like Frankenstein. What we saw was walking w/a purpose, w/long strides & swinging arms, & moving at a faster pace. We ruled out hoax as well because the heat & humidity was extreme. Anyone hoaxing in a giant costume would simply be putting its life in danger… it was that hot.

So this is what l feel happened. It was soooo hot out that the creature in question probably let his guard down because of the suffering & possible disorientation. It was thinking one thing… water! So we come around a bend in the road at a fast speed & probably downwind at the moment when it decided to cross the road. I later looked at a map of the area & discovered that there was in fact a water source in the direction it was headed, less than a mile from the sighting.

If l had been alone, l might not be sharing this story. But there was another witness. It was daylight out (between 10 & 11am) & we were both sober. So l can rule out hallucination. I rule out a human because the size, hair, & fact that there was no reason for a person to be where we saw the figure cross.

That’s the day l realized Bigfoot is absolutely real. & now all these years later l find myself at the head of a paranormal society that investigates & studies all aspects of paranormal/supernatural phenomenon. This includes cryptids like Bigfoot. According to the figures, a person is more likely to see a ghost than a squatch in their lifetime. Most people live in urban areas. Seeing a Sasquatch is truly a once in a lifetime event, if you’re lucky. But fear not! If you haven’t seen one (yet), it doesn’t mean they don’t exist. As the saying goes, “I can’t see atoms, but lm pretty sure they exist”.