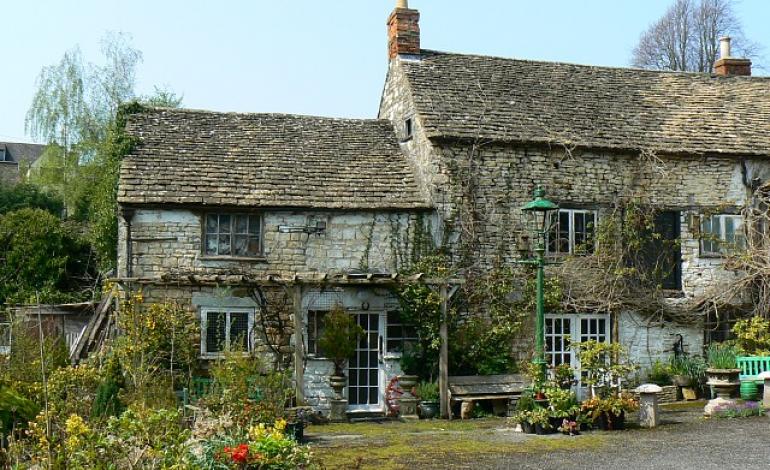 The docile town of Wooten Under Edge in Gloucestershire is a hotspot for international tourists. Aside from the quaint old English tea rooms and the infamous Stonehenge which is situated in the area, there is a building unlike any other.

The Ancient Ram Inn is a grade two listed building .Built in 1145 it was used as a keeping house for the workers who were constructing the local ST Mary’s at the time.

In 1930 the building became private property but exchanged ownership throughout the years . The former owner Mr John Humphries found a variety of satanic objects within the walls when excavating, including a collection of knife heads, skeletal remains, (including a skull) and an iron dagger .

During the years that he lived there Mr Humphries discovered that the Inn had been built right over a 5000 year old burial ground , which quite possibly could explain why the building is rated as one of the most haunted places in the UK .

Mr Humphries claimed that he was attacked frequently by both an Incubus and Succubus, as well as being woken in the night by the spirits of children running around his room.

He believed this was down to the skeletal remains of children they had found whilst doing renovations. The children would of been used as a sacrifice in a satanic ritual.

Countless paranormal hunters flock every year to The Ancient Ram Inn, some were brave enough to stay overnight whilst others “Left through the windows” according to Mr Humphries.

“ I loved it, it was on my bucket list and I wasn’t disappointed”- Beverley

“Love it there! It’s my favourite location and down the road from me” -Ben

One occasion I was in the Witches room and saw a large black shadow and the person I was with was pushed, the table lamp in the room was knocked over! I’ve seen allot of unexplained things there.” -Amanda Edwards

The American paranormal team Ghost Adventures visited the Inn , throughout their stay they caught demonic growled, shadow figures darting from the notorious Bishops room ( which is said to be the most active room in the house ) orbs and a number of EVPS.

Another group that I interviewed Bump in the night paranormal said “ I find it’s always been very active there. “ others I talked to said that the energy changes in each room and you feel like your being watched constantly.

The Ancient Ram Inn is definitely a place worth visiting!