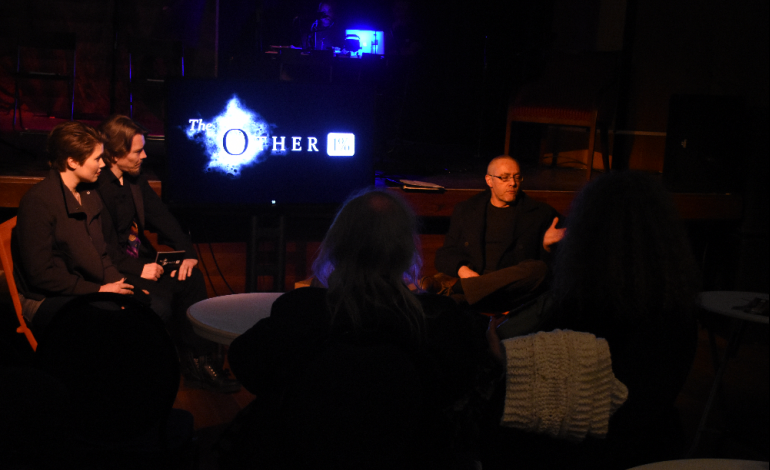 It’s always nice to look back and interviews such as this are the perfect opportunity to do just that. So how do I sum up the past 21 years from TV Ghost hunter to writer? I guess the only way is to start at the beginning.

I was a vocalist in a working club band and a bit part actor in the late 90s with absolutely no intentions or ambitions to becoming a paranormal investigator on or off television. I just happened to be in the right place at the right time when Ghost Detectives came along working alongside a little local production company who were contacted by Lion Television to feature in a six-part UKTV ghost hunting show narrated by Tom Baker for Halloween week in 2001.

I wasn’t really comfortable with ghosts back then, the whole concept kind of scared me a bit. But it was a featured role, and having met Marion Goodfellow our medium a year or so before who quashed a lot of my fear, I decided to man up and go for it.

Following this series, we were called in by the BBC to do a LIVE Ghostwatch from the Tower of London. This is where I met Simon Moorhead, who produced and co-directed the production. What struck me with Simon straight away was his interest in the concept of ghosts and unlike many producers, his enthusiasm and open mind in relation to the subject matter the show was based around.

Following Ghostwatch, Simon and I met up again a year later when he produced Haunted Halloween LIVE, which aired on ITV and shortly after, we worked together on three pilot shows based around the paranormal, none of which made it to broadcast mainly due to the success of Most Haunted which had just started it’s long run.

Our paths crossed once more when I worked on a movie called Mirror Mask that Simon produced and a little later on the revised Blakes 7 audio series.

The paranormal however appeared to be a dead loss, for despite pitching various series ideas, all the main UK broadcasters felt that the paranormal was being suitably covered by Living TV in their entertainment schedules. and so having completed an episode of scream team for Living TV, I backed away from the media for a few years until 2006, when I met with September Films who signed me up for the last three episodes of ITV2s Haunted Homes.

With Most Haunted apparently flagging at the time, I made a conscious decision to give it one more go and wrote the treatment for Greatest Haunts. Every channel in the UK turned it down, but BBC Ireland snapped it up and Northern Irelands Greatest Haunts was born. The series was a great success but ran for only two seasons and other than a pilot I made with Kriss Ellis Stansfield called Britain’s Greatest Haunts, the red flag was being waved again once more.

So, I wrote a book which chronicled my time as a paranormal investigator and worked on a few public ghost hunting events before finally deciding to quit the paranormal scene altogether.

Then in 2013, I began toying with the idea of writing a film and I wrote a screenplay based around the Cooneen Poltergeist, a story we featured in series 2 of NI Greatest Haunts.

This was originally aimed at Northern Ireland Screen but without a producer on board or financial backing in place, the project was dead in the water.

Fast forward to December 2017, and I forwarded the script to Simon Moorhead, who was starting to put together a project called The Other 1%. His idea was to produce original full-cast audio drama’s that are “inspired’ by true stories about the paranormal and to release the plays to a global audience as podcasts.

Simon having read and liked my script, asked me to adapt it as an audio play. The story follows a character called Jack Ellis, an author and skeptic who travels to Ireland to investigate the story of the Cooneen ghost for his forthcoming book.

Needless to say, what he finds is a mystery that has remained uncovered for over a hundred years.

We recorded the play with a fantastic cast in April 2018 and the first part of the play was published on the iTunes, Stitcher and Spotify platforms on 25th August 2018 with the second part being published on the 5th September 2018.

Working with Simon, I have already written, and we have recorded a further three audio adventures about Jack and his colleges which are due to go out between now and Christmas. I am already hard at work on further stories about Jack and we are also looking at creating new characters and new stories.

Here are the links to listen to The Other 1% - Cooneen Ghost and other fabulous audio dramas.