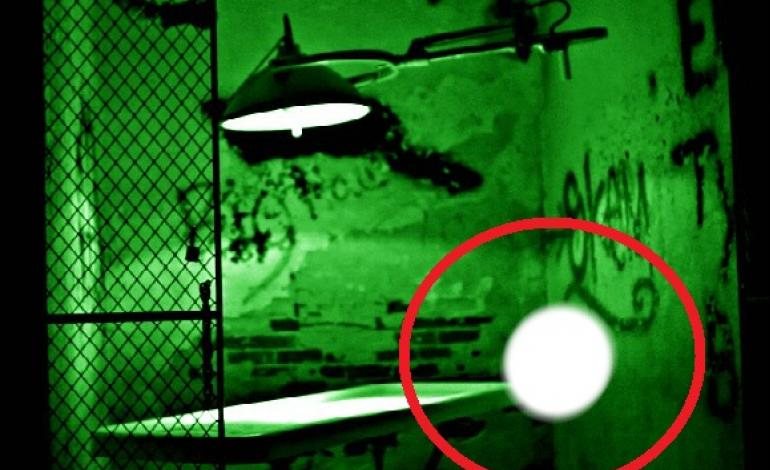 In a recent ghost hunting attempt these strange balls of light were captured on camera inside of Peoria State Hospital in Peoria, Illinois. Peoria State Hospital aka The Illinois Asylum for the Incurable Insane, was in service between 1902 and 1973. At its peak it consisted of 47 buildings and housed 2,800 patients. Several lobotomies and other grotesque operations were performed here. The building is rich with history and its walls hold stories of horrors worthy of nightmares.

I began the investigation alongside my partner in crime John Stephens, the other half of my ghost hunting team IPRAstrong. We entered the autopsy room in the basement of the asylum on a cold night and kicked off the investigation by performing a quick EVP/ITC session using a voice recorder and a “PX” device made by Digital Dowsing. The “PX” has a dictionary of over 5,000 words which spirits can choose from. They can pick a word or series of words by affecting the energy code surrounding a certain word. This device differs from the more recent “Ovilus” series because it allows you to adjust EMF settings to get better readings. We caught a pretty clear EVP response and then began to use the “phonetic mode” setting on the “PX”. Shortly after turning the device on, John witnessed a glowing ball of light fly towards him. At the same time John witnessed the light, I got slammed with a weird feeling in my stomach. John told me what he had witnessed and also that he caught it on camera! As you can imagine, I was very pleased to hear this. I have witnessed and captured MANY of these “balls of light” on camera. One time while filming at an old mafia brothel, we caught several on video and they were also eye witnessed by a group of people!

Moving on, “Phonetic Mode” is an experimental form of ITC communication. It doesn’t use the devices’ dictionary; instead it allows the spirit to use its energy to create raw syllables with the help of a robotic voice generator. Getting intelligent responses this method is rare and always fun to receive. Within the first few moments of turning on “phonetic mode” we received the response “asshole” and then directly after, a loud “FUCK YOU”. John shockingly asked, “Is Fuck You even in that dictionary?” to which I responded, “It’s not using a dictionary”.

I then decided I was going to actually lie down on the autopsy table. This autopsy table, according to the owner, is real and thousands of bodies were examined on it. The owner even went as far as to say when he acquired the table there were still body parts in some of the draining holes. Gross! As soon as I laid down I felt a huge weight press down on my chest. If you watch later on in the video, John lays down and even though he doesn’t mention it, you can see on his face that he feels that same energy.

After I was comfortable (not really) lying on the autopsy table, I flipped on the GhostBox device. The first voice we get says “asshole” very clear and loud. It is always very interesting when we receive two identical responses from spirits on two separate devices during the same investigations. It almost verifies the previous response we obtained using the “PX” device. After lying on the table and getting good responses, I started to feel a very sick and nauseating feeling. I stood up and let John take his turn. I decided to try and close the gate door and lock us in when another “ball of energy” flew into the room and came darting straight at me. I witnessed this ball of light floating at me with my own eyes. It was incredible to capture two of these in the same night.

John decided to end the investigation by offering the spirits some toys to play with. John, like many other serious investigators, believes it is a kind gesture to the spirits to show that we are not just there to disturb them. We believe you must show respect to spirits as they were once alive and had feelings. Unless of course it’s some diabolical asshole ghost….then getting a bit rowdy is ok.

In conclusion, I believe that these balls of light are most definitely paranormal. It is much more impressive when you see them yourself in person and with your own eyes. Why are they merely just “balls of light” and not full apparitions? These are questions that have yet to be answered and I plan on figuring them out.