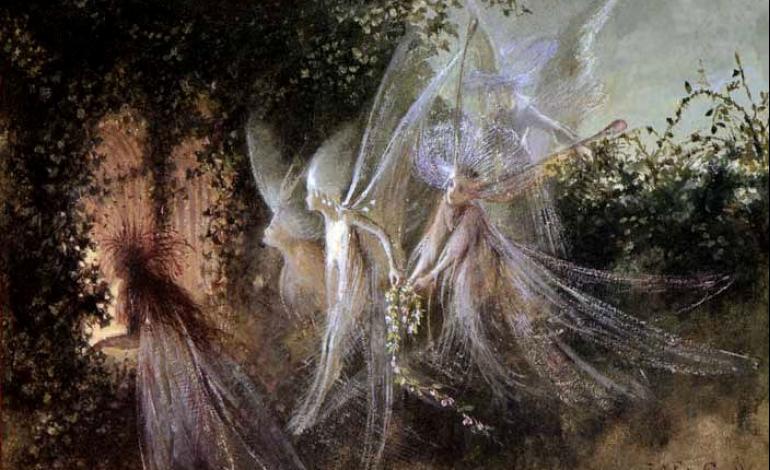 If you had asked your Great, Great, Great Grandmother if she believed in fairies, she would have probably said, “Yes of course!” Up until the mid 1800s it is estimated that around 95% of the population were unwavering in their belief in these magical creatures.

So what happened? When did we become so cynical?

Have science and a need for hard ‘evidence’ overtaken faith? Of course it has.

Fairies, often collectively known as ‘The Fae Folk” are beautiful supernatural beings with magical powers and have existed in literature from the times of Greek mythology. They feature in many medieval legends and still today in our favourite bedtime stories. If you were to ask someone what a fairy looked like, without thinking they would probably say a fairy is pretty much human in appearance except for the wings and of course, the ability to fly. The fact that we all instantly recognize the image of a fairy goes someway to show how ingrained these little creatures are in our world and our minds. But, are they real?


Time spent recently in the Scottish Highlands, surrounded by beauty and mysticism got me thinking. I have always been completely in love with the whole mythology around fairies. The idea of them living in small woodland dwellings fills me with childlike wonderment and I cannot walk through the woods without at some point spotting somewhere that I think looks like a reasonable place to assume fairies frequent

In The Great Encyclopedia of Faeries, author Pierre Dubois uses this description:They are known as the little people, the beautiful maiden, the godmothers, the blessed, the ageless ones. Ruling over earth, fire and water, they protect forests, animals and children, and in their hands lie the dreamy souls of all creatures.

These ‘tinkerbell-like’ beings however have not always been how we imagine these little creatures. Before the 1800s most fairies depicted in stories were tall and a bit frightening, with a tendency toward evil, and the Arabic genie possesses supernatural powers and can change size or shape, but for the most part, we are happy to accept that fairies are tiny, gentle beings.

Of course most people by now are familiar with the famous Cottingley fairies, which were “photographed” by two girls Elsie Wright, 15, and her cousin Frances Griffiths, 10, in the last days of the First World War. The case got its international acclaim through Arthur Conan Doyle, the author of Sherlock Holmes, who was fascinated by the account and published an article in the Strand Magazine in December 1920. With the world’s attention focused on them, the girls had little option but to stick to their story. A juvenile prank had grown into a mass media circus as of course they later admitted that the fairies were nothing more than paper cut outs supported by hatpins. A hoax though it was, it served to highlight our absolute desire to believe in such magic, as even to this day, the suburban area of Cottingley continues to get visitors asking where the Fairy Glen is.


Over the years, as with most mythical creatures, there have continued to be various sightings.

In 1936 a letter was received by a weekly London publication as follows:

When I was a boy of ten we lived in Lanarkshire beside a large park with trees and flowers. At early dawn one morning I awoke to see on a chair, which always stood beside my bed, two small old women of about 18ins. Tall. Each wore tall, conical dark hats and dark, long gowns. They looked at me for about twenty seconds and then smiled to each other before jumping in slow motion to the carpeted floor, where they passed from my line of sight. Very gently I eased myself up into a sitting position, so as not to scare them, but they had disappeared. I got out of the bed, peered under all the furniture and into the cupboard, but could find no trace of them. The moon was full, and red streaks showed in the sky.

They were solid beings: I noted that their busts stood out clearly against the window across the room. It all happened forty years ago, but it has never gone from my mind. They seemed to appraise me as a horse-dealer might do a horse. There was really no affection in their eyes, and the feeling I had then was that I should have liked to catch them in my hands like birds.

It was believed at the time to possibly be an abduction attempt.

In 1938 Dublin’s Irish Press reported, “Watching for fairies has leaped into sudden popularity in West Limerick.” It went on to say that there had been a number of men and boys claiming to have seen groups of fairies and even chased them but to no avail; “they jumped the ditches as fast as a greyhound,” one witness stated.

But have their been any other supposed photographs of fairies ever taken? Well yes, and very recently.

In 2014 University lecturer John Hyatt, 53 claimed to have photographed fairies flying through the air in the British countryside. He claimed to have taken a series of photographs between 2012 - 2014, which he believes prove the tiny winged creatures do exist in the Rossendale Valley, Lancashire. Mr Hyatt has said since that he is on a mission to get people to “bring more magic into their lives” by believing in fairies.


John says he later went our and photographs gnats and flies and they “just didn’t look the same” and insists that the photographs are genuine and have not been tampered with in any way.

The photographs have sparked much debate and many experts have studied the originals and found no signs of ‘photoshopping’ or any other trickery.So are we looking at fairies?


Johns case, and many others will soon be compiled in a “Fairy Census’ being drawn together by the ‘Fairy Investigation Society’ to detail peoples experiences and sightings over the years. Originally formed in 1927, the FIS continued to practice up until the Second World War. Having been reformed recently they welcome believers and skeptics alike. And so it seems that the study of the Fae Folk is gaining momentum.


As of this moment, there is of course no conclusive answer to the fairies question. It is a matter of what you choose to believe, based on what you think you know or how you feel. Sometimes it is best to ignore empirical evidence and rely instead on faith. Other times it is wise to be wary, demand proof and reject silliness. Maybe we can leave it in the very capable hands of the Fairy Investigation Society to ultimately find proof of their existence. Until then however my advice would be to keep putting lost teeth under your pillow…just in case.