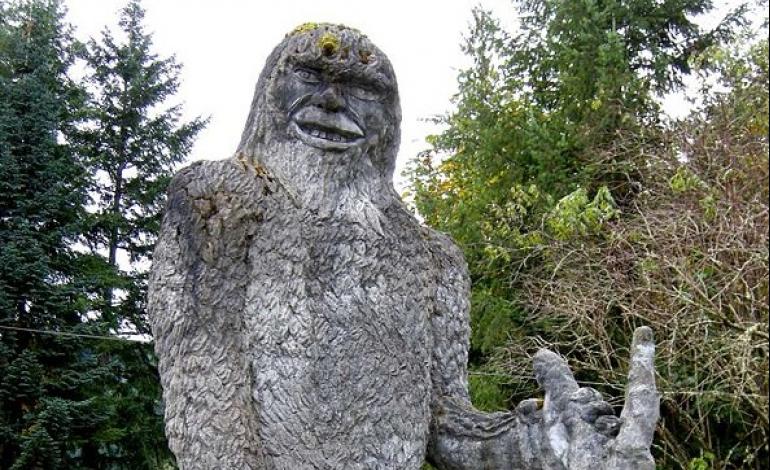 For Jerry Crew the morning of August 27, 1958 seemed like any other normal day. For several weeks, the Northern California tractor driver and his men were tasked with clearing out the trees and brush to make way for a new road through the forest of Humboldt County, California. At least it seemed like any other normal day until he arrived at the work site and that normalcy came crashing down around him.

When he arrived he was dismayed to find that some unknown person or persons had been messing with the equipment, a common problem that anybody who has ever worked in road construction can tell. Someone had moved barrels and tires and by appearances attempted to move the tractors they were using to clear out trees. To Jerry all that was somewhat normal except for one major detail, whoever these people were had excessively large feet that sank into the soil and a horrific animal like stench that filled the air.

After Jerry Crew’s report, the creature that would forever be dubbed, Bigfoot, became a legend and the great American monster. Since that morning, over half a century ago, there have literally been hundreds of sightings, hundreds of books, even a famous video purporting to be absolute proof of the creature’s existence shot in roughly the same area almost a decade after Crew’s report. To many, some kind of tall, hairy creature resided in the forests and swamps of North America. However, as to what it might be, those that believe and search for the creature are left scratching their heads in bewilderment.

Stories of such hairy and unpleasant creatures are nothing new, not just on the North American continent but in other parts of the world. In, “Sir Enyas” a medieval romance novel, the brave knight did battle with a creature in the forests of Germany. This creature called a Wodewose, or Wildman, stood a head and shoulders over Sir Enyas and was covered in shaggy foul smelling fur. After the publication of the book, the Wodewose would be featured in other works of art across Western Europe.

In 986 CE, the famous Viking explorer, Leif Erickson, reported witnessing large, ugly and hirsute giants on his journeys to North America. If Bigfoot exists, and by all reports it does what is he? As with anything in the realm of the strange and unusual there are numerous theories as to what this creature is. Some theories are grounded in hard science, while others, well not so much. So first we’ll begin with the hard science theory that states that such a creature did in fact exist.

It is commonly believed among anthropologists, archaeologists and palaeontologists that mankind braved the harsh elements of the last ice age and migrated from Asia and Northern Russia across the Bering land bridge into the North American continent. And with them came their culture, their customs and their animals, and possibly a very large and unpleasant species of ape, Gigantopithecis.

Gigantopithecis, was a large upright walking ape that populated the mountains and the forests of Nepal, China, India and parts of Vietnam from one million years to about a hundred thousand years ago. Although a relict population may have survived till the end of the last ice age.

According to the fossil record, Giganto, may have stood anywhere from seven feet tall on the short end to 9 1/2 feet on the tall end. It is believed that Giganto was an incredibly aggressive species of ape that may have been hunted to extinction by ancient man. Some researchers, myself included,

Believe that Bigfoot, or Sasquatch, may be a highly endangered relict population of this ancient species of ape that has somehow managed to survive the passage of time.

The term Sasquatch, the second most common name for the creature, is an Anglicized version of the Halkomelem word Sasq’ets, to the Halkomelem and other native peoples of the Pacific Northwest, Sasquatch is believed to be a helper and protector of the woods.

The Lakota Sioux regard Bigfoot in a similar way. The Lakota call the creature, Chiye-Tanka, “Elder brother,” They consider him wise in natural wisdom and the husband of Unk-Ksa, Mother Earth. He is considered to both exist in a spiritual as well as physical plane. He is both protector and Healer. While this may sound like a very pleasant creature that peacefully coexists with man, the Ojibway view this creature in a far more negative way.

According to Ojibway folklore, the Wendigo is a forest demon that is said to have a taste for human flesh and can possess a human causing them to become cannibals. The Wendigo is described as being a tall hairy creature with a head shaped like a star, large pointed tusk like teeth and razor sharp claws. To encounter the Wendigo means doom.

The third most common theory as to the origins of Bigfoot is that he is not a spiritual being or a being from our world. Rather Bigfoot is a visitor from another world. An alien visitor.

The term, High Strangeness, is a term that Urologist’s use to describe an event or series of events that defy rational thought. In many cases of UFO sightings and cases of high strangeness, Bigfoot type creatures are commonly reported. In Northern California’s Mt Shasta, Bigfoot has been reportedly witnessed in conjunction with strange lights in the sky. Although many researchers reject the notion that Bigfoot is an extra-terrestrial, it is still a popular theory and just as good as any other.

A few years ago a couple supposed, Bigfoot hunters made the wild claim that they had shot and killed a Bigfoot. The “bigfoot in a cooler” as it came to be known, was nothing more than a poorly executed hoax that cast a very negative light on the field of cryptozoology. However, if it was legitimate it may have satisfied the desire of mainstream scientist. Such a find would have given them a specimen to study and a great mystery would have been solved. What really bothers me about mainstream science’s refusal to take such a creature seriously is the fact that this animal may just represent the missing link that could prove evolution.