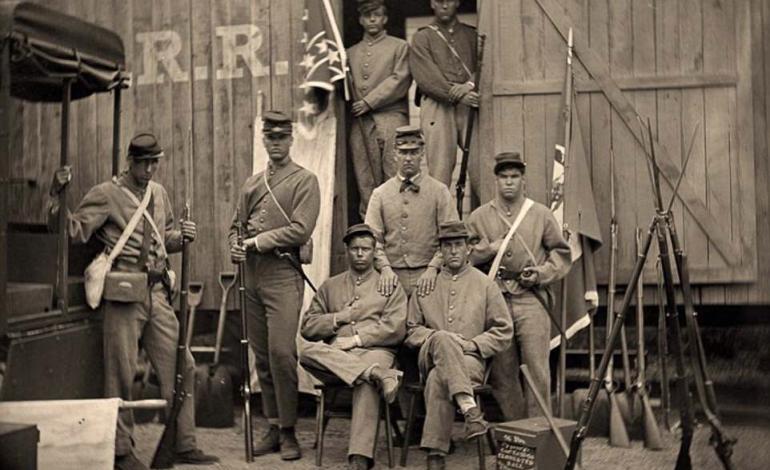 The American civil war was fought in the us from 1861-1865 between the north and south, the war began primarily as a result of the controversy over the treatment of black people.

According to resources the battle of Sharpsburg was the bloodiest day in US history with a combined tally of 22,717 dead, wounded or missing.

The infamous battle of Gettysburg was the largest in North America, one of the supposed haunted locations is that of The Herr Tavern, during the civil war it functioned as a Confederate hospital.

Today the tavern is an award winning hotel and restaurant.

“Enjoy the spectacular, panoramic view of the Battlefields at Gettysburg from The Rooftop Terrace. The Rooftop is an excellent place to enjoy a full service, intimate dining experience with family, friends, and loved ones.”

The hotel welcomes ghost hunters and even has a “dinner with a ghost “evenings. A woman who had stayed there had this to say about it

“Me and my husband stayed at the Tavern and weren’t disappointed! I had two experiences whilst in our room. The door knob to our room flew out of my hand, almost as if someone was pulling the door away from me.

We also heard the sound of heavy boots going up the stairs in the dead of night. I was told by the staff, that visitors have also reported hearing cries as well as gun shots from the battlefield outside, as well as the constant feeling of being watched.

More than 7,000 soldiers died at the battle of Gettysburg in July 1863 and were buried without proper burial rights. Is it any wonder that there are soldiers still roaming?

All throughout the historical town there have been sightings of Apparitions in confederate uniform (the majority of these sightings are caught on camera by people who visit one of the many cemeteries or battlefields.)

Locals and visitors alike also report to hear the sound of horse’s hooves and even ghostly civil war music. Many people have investigated particular areas to do with the civil war, but is there a possibility that some of these hauntings are residual? (Another term for residual haunting is The Stone Tape Theory, which suggests that mental impressions during an emotional or traumatic event can be projected in the form of energy, recorded onto rocks and other items and can be replayed under particular circumstances.)

Another location worth visiting is that of Devils Den in Gettysburg, where it is reported that a barefoot bedraggled man walks , wearing a bright shirt, floppy hat ( the uniform of a disorganised army unit from Texas) As well as figures of soldiers loading their guns ready for battle , pacing back and forth as they do so.

I came across numerous ghost stories while doing research for this article. This is a story I found.

“Civil War battles have been the subject of many motion pictures, but one of the best and most moving was 1993’s Gettysburg.

During the filming of that movie, much of which was done right on location at the actual battlefields, some of the participants had an unexplained encounter.

Because the film required so many extras to serve as soldiers, the production hired re-enactors to portray the Union and Confederate armies.

During a break in filming one day, several of the extras were resting at Little Round Top and admiring the setting sun.

They were approached by a grizzled old man, whom they described as wearing a ragged and scorched Union uniform and smelling of sulphur gunpowder.

He talked to them about how furious the battle was as he passed around spare rounds of ammunition, and then went on his way.

At first, the extras assumed he was part of the production company, but their minds changed when they looked closely at the ammunition he gave them.

They took the rounds to the man in charge of giving out such props for the movie, and he said they did not come from him.

It turns out the ammunition from the strange old man were genuine musket rounds from that period.”

Another story comes from the eyewitness accounts of two janitors who worked in one of the old civil war hospitals.

“The elevator passed the first floor and continued on to the basement. When the doors opened, the administrators could scarcely believe their eyes.

What they knew to be storage space was replaced by a scene from the hospital: dead and dying men were lying about on the floor.

Blood-covered doctors and orderlies were rushing about chaotically, trying desperately to save their lives. No sound emanated from the ghastly sight, but both administrators saw it clearly.

Horrified, they frantically pushed the elevator button to close the doors. As the doors closed, they said, one of the orderlies looked up and directly at them, appearing to see them with a pleading expression on his face.”

The earth of Gettysburg and other civil war areas is stained with the blood and echoes of the gruesome battles. Let’s just hope that eventually these poor souls will somehow find peace.