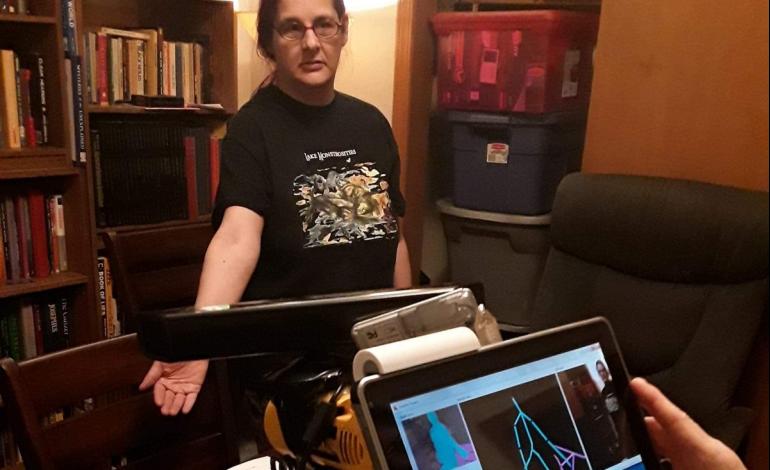 Several years ago the Kinects Camera with Skeleton Software was introduced to the populas via ghost hunting shows on cable television. Since then, various paranormal teams have been utilizing them in their investigations. We (the Northern Wisconsin Paranormal Society Ltd.) in Rhinelander, Wisconsin are and were no exception.

However, because they are a newer thing, there wasn’t much research out there regarding the application of this technology concerning paranormal investigations. So we had to apply scientific method, research, and multiple validation to use the equipment respectably and responsibly in the field, as glitches and whatnot can cause uncertain readings and false positives. When common sense isn’t applied, anything can become a ghost.

At this point in time, we have two SLS Kinects Cameras which we set up on tripods, and one hand held mobile version which Tex (NWPS Tech Manager) has recently built. The whole set up requires a monitor, a special camera (X-Box Camera is what we use), a computer, and a computer program called Skeleton Software.

This is basically how it works. Any time motion is detected with the infrared laser grid that the camera puts forth, the software in the computer which the camera is hooked up to assigns the motion a skeleton, usually in the form of a stick figure.

This technology was originally created for real time body movement in video game play. The systems camera would map out a person and apply the software while the game was being played. If the person playing the game punched the air for example (like in shadow boxing), then the video game would register and show that as a punch for the character in the game. Not only can one now physically punch or kick while the video game picks those movements up and simulates it, but one can also see it on the monitor as well.

When some people who were playing the game (while being mapped out by Skeleton Software) noticed that every so often something or someone else was also being mapped out (because motion in the environment was detected) although no one was physically or otherwise visibly present with the human eye (which only sees approximately ten percent of the visible spectrum from ultraviolet to infrared).

Those folks of course took note, and so did ghost hunters and paranormal investigators like us. So we set out to test the SLS camera to see what we thought about it and to test it both on investigations and off.

We noticed some things about the camera when we first started using it. It was not in the regular habbit of registering something out of nothing, which was a good sign for us. In other words, rarely did the set up map out a figure we couldn’t see with our own eyes. That was nice because we didn’t want to constantly deal with false positives.

Once in a while the SLS set up would try to assign a stick skeleton to an inanimate object. But when that happened, it was easy to tell what was going on. Other times we would get a random glitch when it would try to map something out we couldn’t see, but it wasn’t necessarily skeleton looking. It seemed as if the software was struggling to determine what it was looking at, or should l say what it was picking up or detecting.

If it is something more, or to say that someone or something may actually be there (but invisible to the naked eye), the mapped out stick figure of a skeleton will usually return. This has become a protocol we now use with the SLS cameras when it’s mapping something out of interest.

Here is the thing about glitches, no one can create a glitch (or false positive) at will. We know this because we repeatedly tried while experimenting with the camera. When l say we, I mean the NWPS as a collective, as well as individually. We have tried to use the heat from a blowdryer, hanging strings, moisture (steam and spray bottles), bubbles, smoke, etc… none of which would register glitches.

Remember, the SLS is still a newer thing than not, which means that there wasn’t much data out there regarding scientific material and testing of the equipment in different settings and ways, especially when it came to long term use, so we were left to establish that for ourselves.

As we write this, we’d say that only around maybe a third to halk of the paranormal groups in Wisconsin even own a SLS Kinects Camera. So the information out there is definitely limited. However, what has been tested and studied is finally starting to surface, such as this material (as well as results from others, which we contemplate on). And even though it is one of the newer pieces of equipment in our arsenal, ultimately we treat this camera like any other tool, following the protocols we’ve set for ourselves.

Another key to using the SLS camera to its maximum efficiency is to utilize the golden rule of multiple validation, like we would with any piece of equipment or psychic impression. Multiple validation is a staple for any good investigator in any field, including the paranormal. Triple validation is considered gold to historians when it comes to establishing truth.

So when we get what we feel is a solid hit on the SLS camera (a mapped out figure we can’t see with the human eye) and we have applied the protocols while documenting everything we do, then the next step is to get secondary validation with any other piece of equipment. I will usually grab an EMF detector (either a multi purpose Mel-Meter or our trusty Ghost Meter Pro) and try to get a reading on the mapped out skeleton by approaching it, but not before l snap a few quick pictures first. The longer the figure is there, the more things can be tried.

I also like to try to get a temperature reading, either with a laser temperature gun or a thermal camera. If one can get any anomalous readings while a bodyless figure is being mapped out, then that can go a long way to add validation to what may be present, such as a possible entity. Our psychics will try to establish a read on the figure, although not always successful. And don’t forget to try an EVP session if time allows for it.

Another thing to try is general communication. If a mapped out skeleton without a visible body is present, simply ask the entity in question to raise its arm. If it does, then you may have an intelligent entity on your hands (and one heck of a piece of video evidence).

{Here is a figure which was picked up during a paranormal investigation. The green stick figure sitting on the bed is a paranormal investigator. Note that their body shape is also visible. The pink stick figure standing is a possible entity which showed up. First it was asked to raise its arm. When it did to our surprise (as that is actually a rarity), the investigator then reached out to touch the figure. Note that there is no body shape along with the mapped out skeleton, thus becoming a plausible entity.}

If no response is garnered, either it’s not interested in jumping through hoops for anyone, or perhaps it’s a residual apparition, again assuming a glitch or false positive is ruled out by this point.

We also noticed that using a SLS camera in the same room with any other SLS or infrared camera can produce some pretty strange results, not with the skeleton software, but with the night-vision backround. It can accentuate collected anomalies for example. This can either be viewed as a good thing or a bad thing, depending on how one would look at it or use it.

So those are the basics we have established to date through our own personal research. Ultimately the SLS camera along with the Skeleton Software give us another tool which works well as long as one establishes and practices the protocols necessary to provide scientific method to the equation (so to speak). Fare thee well and best wishes.

Soon to be released in 2019, look for the long awaited book Paraversal Universe: Decade Of Diligence (Experiences, Cases, & Insights From The Northern Wisconsin Paranormal Society Ltd.) by Kevin and Jennifer Malek.