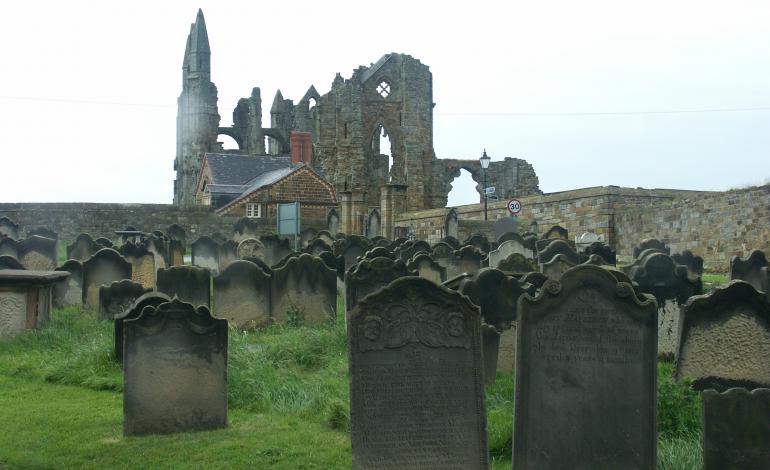 Every year my husband and I go off to Whitby Goth Fest, which is a festival that began with people who appreciated the gothic lifestyle, all converging on the small seaside town of Whitby in North Yorkshire. Why?

Bram Stoker found some of his inspiration for ‘Dracula’ after staying in Whitby in 1890. He stayed in a house on the West Cliff and was trying to decide whether it would be suitable for a family holiday.

It seems he was quite smitten with the atmosphere of the town; the red roofs, Whitby Abbey, the church with its tombstones and even the bats flying around the many churches.

Stoker found a general history book at Whitby library, which was originally near the Quayside. He tells us so at the top of a sheet of his notes;

”...there was a look of fear and horror on his face that the men said made them shudder. Poor dear old man! Perhaps he had seen Death with his dying eyes!”

There seems to be little doubt that Whitby is where he discovered the name. It is fairly certain that Stoker also found material in the British Museum in London. His name is listed among famous people who researched there. Stoker lists in his notes over 30 source books for the novel. Though none of them deals with Dracula, they include books on Transylvania, folklore and other relevant topics.

In Stoker’s book, Dracula is shipwrecked off the Yorkshire coast. He is actually on his way to London on the Russian schooner, Demeter. He comes ashore in the guise of a black dog and wreaks havoc on the town.

‘But strangest of all, the very instant the shore was touched, an immense dog sprang up on deck from below….. and running forward jumped from the bow on to the sand. Making straight for the steep cliff, where the churchyard hangs over the laneway to the East Pier… it disappeared into the darkness’......

One of the characters in the novel, Mina, keeps a journal containing detailed descriptions of Whitby and those areas frequented by Dracula.

“Right over the town is the ruin of Whitby Abbey, which was sacked by the Danes, and which is the scene of part of “Marmion,” where the girl was built up in the wall. It is a most noble ruin, of immense size, and full of beautiful and romantic bits; there is a legend that a white lady is seen in one of the windows.” ‘Dracula’ by Bram Stoker (1897).

Amazingly, many visitors to Whitby ask where Dracula’s grave is located, forgetting that he is a work of fiction. The Count’s devotees search St Mary’s Church graveyard, after scaling the 199 steps, in search of his last resting place!

Whitby provided Bram Stoker with an atmospheric backdrop to his novel, a quiet place to indulge in a little library research and a place to have a wonderful family seaside holiday.

If you haven’t read the original book, you really ought to – it’s a classic, gothic horror novel and still quite scary, even today !