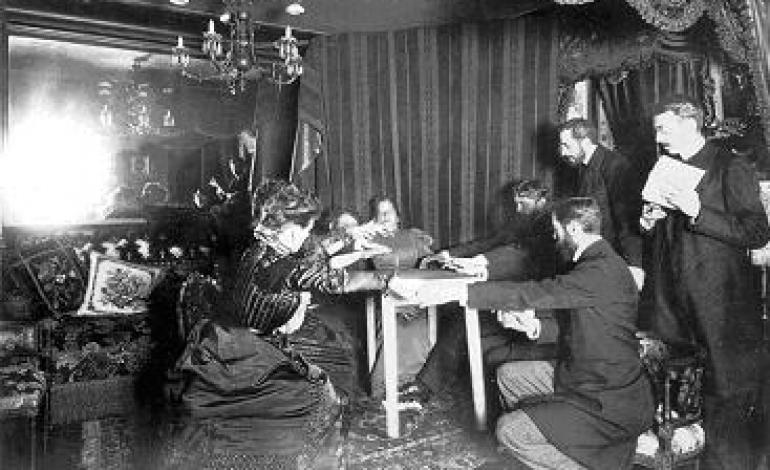 The history of Spiritualism can trace its genesis to a small home in Hydesville, a tiny community in upstate New York and a strange haunting. In 1848, Margaret and Kate Fox claimed to have come into contact with a spirit haunting their family home. When the haunting began, the spirit made contact by tapping on the walls and the girls, in turn, tapped on the walls getting answers to various questions.

As the haunting progressed, the girls called the spirit, “Mr Splitfoot” a nickname for the devil due to the families fear that the spirit might be a demonic entity. However, all that changed when Mr Split foot claimed to be the spirit of a traveling salesman, who claimed to have been robbed and murdered in the house many years earlier. He explained to the girls through an intricate one tap for yes and two for no that his spirit would not rest until the men who murdered him were brought to justice.

As the news spread, the girls astonished friends and neighbours with their new found ability of communicating with the dead. Unfortunately, their parents were anything but impressed feeling that such a thing was against the laws of God. Communication with spirits was expressly prohibited by the bible. Due to this belief the girls were sent to live at an austere Quaker village in Rochester.

Much to the Chagrin of the Fox’s, the girls were not admonished for their curious new talents. Instead they were encouraged to speak with those on the other side of the veil. The Fox sisters began having meetings, or séances, in and around the New York City area. The multitudes flocked to these amazing young women in the hopes they could contact their dearly departed loved ones. As their popularity grew, others began coming forth claiming to possess these abilities. Thus, a new way of viewing life after death was born.

It seemed that virtually overnight the new spiritual beliefs took hold, and became an instant success. Although the United States was the birthplace of Spiritualism, this new way of thinking found a home across the Atlantic Ocean in Great Britain and France. Suddenly it was hip and trendy, especially among the rich, to seek out the psychic talents of Mediums to hear messages from the realm of the spirit. And it wasn’t just contacting the dead that fascinated people; they were seeking answers about life and death that were previously considered forbidden by the church. The old rules no longer applied.

The séances led by the mediums seemed to follow a basic formula. The seekers would come to the Medium’s parlour and hold hands around a table with the medium positioned at the centre. As the room darkened the medium would fall into a trance and several manifestations would occur that had a major wow factor for all those in attendance.

Although spirit communication was the specialty of the medium, spirits weren’t the only things to manifest during séances. Musical instruments would appear floating in mid-air being played by unseen hands. Another manifestation reported at séances was a bizarre substance that poured from the mouths, noses and ears of the medium. This substance called, ectoplasm was believed to be a substance from the other side and was believed to be what spirits were made of. For those who attended these séances, the phenomena appeared to be completely legitimate and fakery was the furthest thing from their minds. All that would soon change.

In Great Britain, where Spiritualism enjoyed unimaginable success, a group of philosophers and scientists formed the Society for Psychical Research under the direction of Edmund Gurney and Frederic WH Myers. The group of intellectuals were on a mission to see if there was any truth to reports of ghosts and hauntings. However, they seemed to put a great deal of focus on so-called mediums and their séances. If there was any truth to this activity, the SPR would get to the bottom of it.

The SPR quickly went about the business of attending séances oftentimes under the guise of the bereaved. They needed to test the stated claims of these mediums. SPR investigators became convinced that, for the most part, many mediums were frauds bilking their clientele out of there hard earned dollar. They discovered that séances were held in the dark not just for effect, but also for fakery.

It was not uncommon that a medium was disproved during a séance. Investigators discovered that ectoplasm was either made of cheese cloth or some other homemade concoction. Furthermore it was revealed that the spirits that manifested during a séance were employees of the medium in ghostly costume. Many of these mediums were disgraced by the work of the SPR. One would think this exposure would have effectively killed the spiritualist movement. It didn’t, in fact it had quite the opposite effect.