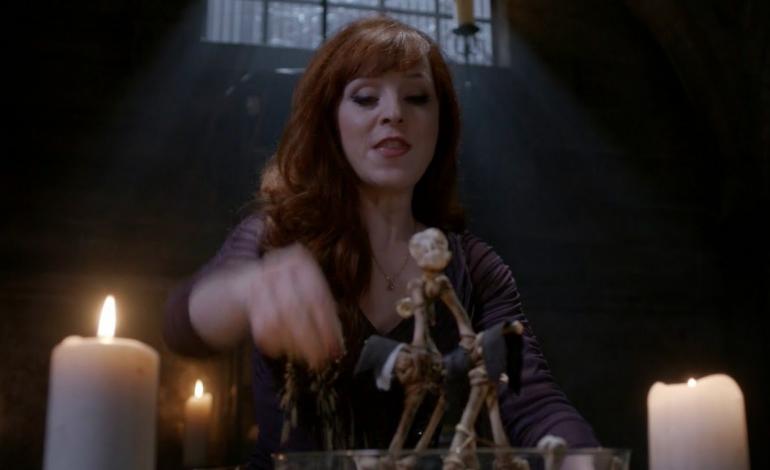 Ruth Connell has been appearing in the World wide cult acclaimed TV show Supernatural since 2014, where she hits the screens as Rowena, Crowley’s long lost mother. A Scottish, witch who has objectives that may be sinister.

Ruth’s last role she played in the UK, was on ITV sitcom show called “Above Their Station” where She played a Ukrainian cleaning lady who was an ex-soviet gymnast and spy in disguise.

We thank Ruth very kindly, for taking time out of her busy schedule and allowing us to interview her.

1. Have you had any ’ Supernatural experiences ’ yourself Ruth and if so can you describe what they were?

I believe I did - in an old flat I lived in Blackheath, London. It had been a hospital in the Crimean war later converted to apartments. I had the ‘night terrors’ there one night – paralyzed yet awake with the sensation of something trying to move in through me – in through the top of my head but not managing to stay – flying out of my body. I put it down to a vivid, bad dream but also never felt comfortable in the flat. None of us did!

A taxi driver a few months later told me, as he dropped me off late one evening, that my building had been on the TV show “Britain’s Most Haunted” and that the flat I was in used to be the psychiatric ward of the hospital where Soldiers who couldn’t be contained were hung in nets from the ceiling. This fairly broke my heart. What a bloody shame. We moved out of the apartment as soon as our lease was up.

2. Do you believe that the universe can have a Mystical power that we can tap in and use?

I absolutely believe in a universal life force power. It would be cool if we could stop seeing it as mystical and more of a practical thing!

3. Your role in the much acclaimed and extremely popular Supernatural series adds a certain ‘spice’ to things and is somewhat an unknown quantity. You look as if the role was made for You, do you find her character an easy one to play?

I adore playing Rowena. There are so many facets to her and a few of them are in my ‘sweet spot’ as an actor so I’m currently feeling like the luckiest girl who moved from Scotland via London to LA who films in Canada ever  I wouldn’t say its easy but very satisfying. I’m so grateful to the writers, producers, directors, crew and other actors – I’ve really been given space to play a very playful character. Mark Sheppard who I have worked with most so far is so talented and perfect as Crowley, it’s a no brainer sometimes how to react to him!

4. Ruth you have gone an unusual path to achieve your success, can you tell us how you got there and were there any unexplained ’ miracles’ that happened en route to your success?

Its funny, the harder I work the more miracles there seem to be… I do think there have been some cool ‘co-incidences’ but I also believe we can see these opportunities when we are in the flow and tuned up – ready. The fact that the part of Rowena exists at all is a wee personal miracle in my life undeniably. I metaphorically kiss the sky every time I talk about Supernatural and how lucky I am to be in the show.

5. We all have individual beliefs created from various experiences as we grow up or have been educated in. Do you believe in the after-life and if so have you had experience of this either personally or through something that has happened to another and you have been party to it?

I believe consciousness continues – perhaps not in the literal ways we can imagine now but I have certainly felt connected to loved ones who have passed. Even if they do only live on in our own minds – at the very least, it’s still potent and valid and love and can still influence us greatly.

6. The word ’ Witch’ means ’ Wise Woman’ and herbalists were often called witches for growing herbs, making potions and treating ailments with them etc. Are there any know ‘Wise women’ in your family?

I know my great grandmother Mary Strachan read tea leafs! Does this count? She thought it was just good common sense that she had intuitions about her family and friends.

7. Have you felt that your move to America has been instrumental in your success and if so, why?

I was always drawn to America, like a lot of kids from other countries I guess. I had fantasies of being a teenager in the states – probably the result of too many great US movies! It seemed very far-fetched that I would end up in “Hollywood” but it became less and less bizarre and more reasonable an idea as my life and career progressed. I have jumped through hoops to get my Green Card and I am so pleased to be able to work and stay in the states. God Bless America! It can be the land of opportunity – if you are prepared to work your asse off 

8. Do you have any mantra’s that you live by daily?

Gratitude. Try to treat others as you would like to be treated yourself. Lift everyone up with you rather than pull someone else down (easier said than done when you just fancy a good gossip!).

9. Do you believe in the power of prayer or affirmations? Which do you use?

I also read Wallace Wattles a lot thanks to an amazing coach I work with called Maria Nemeth. My healer friend Terri George in London has also been part of my journey towards seeing prayer as a way of living rather than a thing that’s done within the bounds of organized religion. In a tight spot I will resort to the ones I was taught as a child – they never leave you really.

10. it’s fantastic to see a Scottish Girl reach for success the way you have Ruth. In the spirit of’ ‘playing it forward’ what are your next goals?

I want to keep up my level of effort in all the work I do – stay grateful, learn more. Improve, be the best actress I can possibly be. Then of course, eventual world domination… I just hope I can do good work in film as well as TV and Theatre. Visit many more different countries and have a lovely family. Just the usual! Oh and terrific muscle definition but I’d need to start going to the gym for that. Ah well. One realistic goal is to dance more often – like I used to. I hope I can give back more – I try to in small ways with my time and attention on others now but hopefully more so in the future.

11. Are there any similarities between you are your character in Supernatural?

We are both wee and red-haired. Like dresses. Rowena is ballsier than me. We both tend to think that we are a little bit funny. Others may disagree.

12. Do you have any ’ Supernatural Powers’ to speak of and if so what would you say they were?

My Supernatural powers are my friends, coaches and family. I would literally not be here standing where I am without all of their universal life force power too! Their good intentions, love, support patience and wisdom. So my Supernatural power must be my ability to connect with amazing people! And Skype! For when I used to be a bit lonely when I first moved to America on my own. And now, to speak to my own personal Supernatural’s wherever they are in the World.