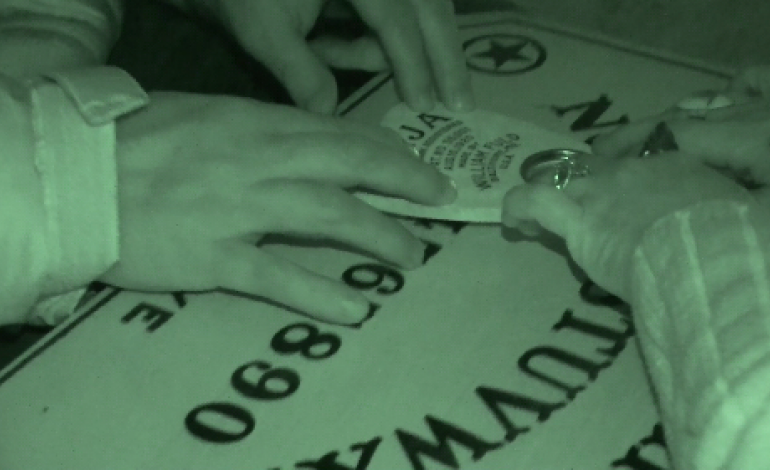 Whispers Estate is a haunted home which sits in the town of Mitchell, Indiana. The house is home to a seriously dark history including death and tragedy. A young girl by the name of Rachael died inside the home by being badly burned in a fire. Two other deaths have been recorded and over the years paranormal activity has become a regular occurence.

People have reported seeing apparitions and hearing voices in the home. Strange smells can fill a room for no reason and a terrifying ghost dubbed “Big Black” has been witnessed by many visitors. The first floor of the home was used by a doctor for 26 years. Many bones from surgeries were tossed into the backyard and there are many patches of grass which refuse to grow.


LiveSciFi hosted the 48 hour investigation which streamed live on their popular Youtube channel. IPRAstrong also joined the LiveSciFi team for a Youtube collaborative investigation. The investigation began with Tim Wood, owner of LiveSciFi, giving a walkthrough of the home for the viewers at home. Tim told the camera the story of a haunted doll upstairs which reportedly went missing from “the doll room” and returned at a later date with burn marks covering it. The current owner now keeps the doll locked in a glass box.

The team was about to begin their first E.V.P. session of the evening when the door leading into the room made a clicking noise and opened slightly. Directly after this, the sound of footsteps outside of the room could be heard. Tim then held out a voice recorder and asked “Do you guys want us to get out of the room? Or do you want to come into the room?”. He waited a few moments and then played back the audio. As soon as he finished asking his question a spirit yelled into the microphone, “IM IN THE ROOM!”. This response was so clear that everyone jumped and Tim replayed the audio to double check what they had just heard. Sure enough, the response was there….loud and clear.


During the first and leading into the second night, the team managed to capture an amazing amount of paranormal evidence including several more E.V.P. responses, direct ghost box responses, and even an XSLS Cam Capture. At one point a ghost box even turned on by itself on the kitchen table!

Tim decided to try a tool called “The God’s Helmet”. This is a Science Fiction looking device which straps on a helmet full of wires to your head which is attached to a laptop. This device pumps magnetic information into your brain which can cause you to go into a trance like state. In theory, allowing this machine to manipulate your brain, you become more open to the world of the dead.


After Tim’s “God Helmet Session” he recalled traveling through the home using mirrors. Mysteriously, the owner has at least one large mirror in every room of the house. Tim also mentioned that Spiritualists will use mirrors in attempt to communicate with the dead.

John was up next for the God’s Helmet experiment. The team left him alone in the “Nightmare Room” wearing the helmet with a mirror in front of him and candles burning. They walked just across the hall to a room dubbed “The Seance Room”. The room was a tiny attic space which had a large diamond shaped mirror hanging on the wall. In front of the mirror was a large table which purportedly is used for seances. Tim began using a Ouija board at this time with researcher Kirsten Manning.


Keirran Davidson, an investigator from Tennessee, was downstairs managing the live feed at this time. David sat on a ledge in the Seance Room holding the camera which was streaming to the computer downstairs. He began to feel unnerved when Tim and Kirsten’s hands began to move on the board and spell words. A demon spelled it’s name and also the world “DEAL”.

At this point David decided it would be a good idea for him to go back into the Nightmare Room and check on John. He slowly walked into the room using only the nightvision as his eyes. He turned the camera and zoomed in on John’s face. John stared into the camera lens from across the room with a menacing grin planted on his face. His eyes looked black in the nightvision and David was a bit startled (as was a good majority of live viewers). John started laughing and was acting very strange. He later told David that he felt as if something had entered his body for a moment and made him continue smiling for no reason. SPOOKY!


David told John to sit tight and that he’d return soon. He then returned to the Seance Room to now find Tim acting unusual. Tim was staring into Kirsten’s eyes with a strange look on his face. He then threw a piece from the Ouija board and stood up and left the room against Kirsten’s advice to “say goodbye” to the spirits and end the session. Kirsten followed Tim all the way downstairs urging him to close the session. Tim made his way into the basement of the home claiming that he just wanted to be alone. It is believed that he experienced a partial possession from using the Ouija Board. Sometimes a spirit can enter your body but then it leaves shortly after. This is different from a full blown case of possession which in some cases requires an exorcism.

The team experienced several more frightening things in the home. You can watch the recap video in this blog or head over to LiveScifFi’s channel and watch the entire 48 hour broadcast. Please always remember to protect yourself when ghost hunting. It can be a very dangerous job at times.