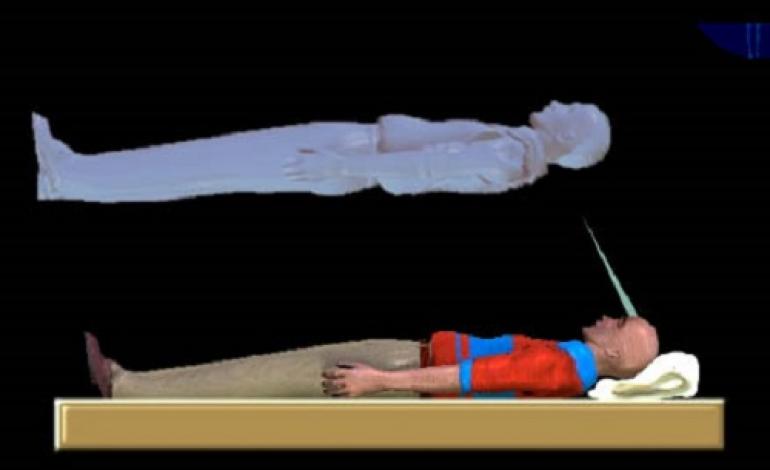 In this article I’d like to inform you about a gentleman from London who has invented a device which he claims can induce an Out Of Body Experience (Oobe). Not only that, but this device he claims can also transport you to the past, and the future (!) and, would you believe it, the spirit world. What you are about to read is some of the information that was told to me on the occasion of my visit to this gentleman, a chap called Tony Bassett. Accompanying me on this research visit, was my partner and fellow researcher, Judith Jaafar.

Judy and I met up with Tony at his home in Haverstock Hill in Hamstead London where we both sat back in our chairs to hear what can only be described as some fantastic claims. Being the imaginative inventor that he is, he began to ponder whether he could build a machine which could induce an OOBE to occur, An OOBE is when an individual claims that his physical material body has somehow separated from his astral or spirit body where one can astral travel through space or time. In the vast majority of these cases the individual is either asleep or inactive and this can either be a enjoyable or frightening experience. after many sleepless nights working away in his workshop he eventually produced a device which he fondly calls his ‘Bio-Energiser’ Basically Tony’s ‘Bio-Energiser’ is a box which is one foot square by seven inches high. Inside the box are high voltage generators creating very high frequencies, these frequencies come out of the box as an electrical field which then spreads out into the room affecting all those who are close to it. The device runs on 12 volts and it can either be run on a car battery or a mains battery. I asked Tony what a typical Out Of Body Experience was like to which he replied that one doesn’t lose consciousness. One experiences rising up above the house floating above the roof and being able to see up into the sky and then floating amoungst the stars. One could then go to a specific place or indeed any place that you want, and usually people find themselves there instantaneously. Some people have even visited planets and witnessed strange entities and creatures upon them. One way in which Tony can convince those sceptics, is either for himself, or one of his students (in an Out Of Body state) to go and visit someone without them knowing afterwhich he would then telephone that individual to tell him what he was wearing, what the inside of his house was like, and what he was doing at a certain time. Tony explained that what appears solid in this OOBE state, is in fact ‘not’ ! One can go straight through walls, up ‘through’ the ceiling and out of glass windows with the greatest of ease, sometimes people can actually feel the texture of the walls and glass as they pass easily through it. Tony’s dream is to one day build a ‘Bio-Energiser’ room where the walls of the room would contain all the equipment, “now wouldn’t that be something”, he said

Judy and I were becoming more and more fascinated by the claims of this man and my next question was one in which I was keen on an answer, “Was it possible to visit the spirit world” ? Many times was Tony’s answer and he went on to say and I quote.

“I was doing a session for a group of people and one lady there just broke down in tears she was crying uncontrollably and I thought that there must be something terribly wrong here. And I said to her ‘what is it’’. Now I didn’t know it at the time that she had just lost her husband, and she said, ‘Well I’ve just been to visit my husband in the spirit world and he looked so beautiful and so calm and now I know he’s alright. I’m crying tears of joy. I met him surrounded by nice spiritual people in light and he has got used to the fact that he is no longer on this planet’. And she said she met him face to face and that it was such a tremendous relief that he was O.K.”

Tony explained that this lady had met her ‘dead’ husband in beautiful gardens. Apparently lots of his subjects have visited the spirit world and each and everyone of them come back saying how wonderful it is. This was fine I thought to myself, but what about bad experiences, had anyone had a bad experience during an OOBE ? He stated that there were a few people who had reported quite bad experiences. One group admitted to taking drugs whilst using one of Tony’s ‘Bio-Energisers’, they found themselves in some dark foreboding caves being chased by demons, this might however been partly due to the drugs they were taking. I wanted to know how long it took for someone to go into this OOBE state once he had switched his device on and he replied by saying that it can be different for people, some go under quite quickly whilst other people might take a few minutes. Tony reckons that if someone hasn’t gone under after the first 20 minutes then it won’t work for them, an average for most people would be around 6 minutes.

I asked Tony to sum up in general what he felt the potential was for human kind with his device and he replied,

What I feel, is that there is a terrific potential here which is untapped at the moment and the potential extends in many directions. It extends into the field of healing and paranormal Investigations, UFOs and states of human consciousness, space travel. Now one can also produce magnification of it in the sense that you can travel within the confines of atoms and see the structure of them Now in the realms of language translation one of the things that can be done in an out of body experience is to enter into the consciousness of another person in the past or the future. When one does that, one doesn’t in general influence that person but whatever language their speaking you seem to be able to instantly translate it into one’s own language, so it strikes me from a translation point of view this could lead into many fields of potential benefit to human nature.”

It had been a very enjoyable evening spent in the company of Tony Bassett a man with ideas and a sense of purpose. A man who’s convictions that his device will benefit all mankind was plain to see during the whole of our interview. My colleagues and I hope to test Tony’s device early in the New Year and I’m sure that this magazine will be keen to hear our findings, so stay tuned on that one, we may be on the threshold of new and ever widening horizons.