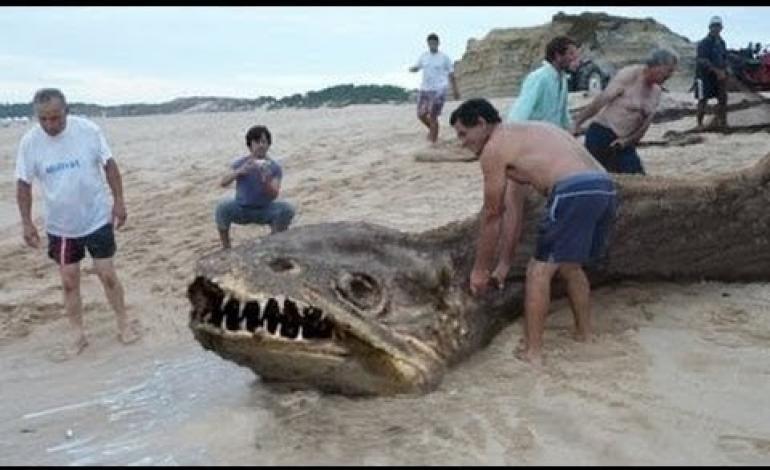 In 1997 the U.S. National Oceanic and Atmospheric Administration detected a strange extremely powerful ultra, low frequency on the ocean floor at the tip of South America with the Equatorial Pacific Ocean Autonomous Hydrophone Array. When the sound they called “Bloop” was initially analysed, researchers believed the noise was nothing more than underwater seismic activity or large icebergs scraping the ocean floor. Researchers were happy to leave the explanation at that, however something changed their minds five years later.

In 2002, after careful analysis, Dr Christopher Fox of the NOAA felt that the audio profile did not match what they had on record for seismic activity. Dr Fox believed that the “Bloop” was more consistent with an underwater organism, and a very large one at that. Whatever creature made this noise on the ocean floor was potentially something unknown to modern marine biology.

Ever since man took to the open seas for fishing and exploration, there have been reports and eyewitness accounts of what could only be described as sea faring monsters. Most sceptics are ready to dismiss these accounts of sea serpents as misidentified conventional sea creatures such as whales or sharks. However, these seasoned veterans of the seas and oceans of the world scoffed at such dismissive explanations. To them, and many more, there be monsters in the murky depths of Davy Jones’ locker and if Bloop was in fact a large as of yet unknown sea creature, these salty seamen may just be right.

Although strange and fearsome sea creatures were being seen regularly by sailors and land lubbers alike, most sightings were rarely documented as they were considered to be terrible omens. However, Olaus Magnus in his, ” Historia De Gentibus” wrote down one of the earliest sightings of a terrible sea serpent he called, the Sea Orm.

In 1522, near an Island in the Archdiocese of Hammer, an exiled priest reported regular sightings of an astonishing 75 foot long creature that swam the waters surrounding the island. The priest described the creature as being blood red with a black belly and large fierce jaws. After hearing of this nightmarish sea serpent, Magnus, believed that the sighting of the creature portended horrible events. It would appear his assumption was correct. Shortly after seeing the monster, King Christiernus was banished from his throne and a great persecution of Bishops followed the sighting.

After the initial sighting of the creature, years later in his Carta Marina written in 1539, Magnus wrote of more sea serpents or “calamaties” as he called them. In the Carta Marina, Magnus wrote a series of short stories about sea serpents that attacked Norman vessels breaking them apart and dragging sailors to their deaths below the water. One creature that was notorious for attacking vessels was described as being 200 feet long with flaming eyes and razor sharp scales as black as pitch. Again, Magnus believed that calamitous events would soon follow the sightings of these sea orms.

The Serpent of Gloucester Harbor

For centuries it was believed that sea serpents only haunted the seas of European lands crushing their ships and devouring their crew. However, in 1639 near Cape Ann, Massachusetts a giant sea snake was seen by several eyewitnesses near Gloucester Harbour.

In 1641, John Josselyn, wrote of a sea serpent that lay coiled upon the rocks of Gloucester Harbour. Two ships carrying English settlers would go hunting for the sea serpent but we’re dissuaded by local tribes who claimed that if the beasts were killed the colonies survival would be in grave danger.

The years following the original sightings, witnessing the sea serpents were sporadic. The serpent of Gloucester Harbour were considered to be sensational and nothing more than mere myth. But in 1917, the Linnean Society of New England launched the first organized scientific investigation of the sea serpents and made a few discoveries that could turn myth into reality.

July 1879, a news journal called The Graphic, published an article and printed an engraving by Captain Davidson of the ship, Kiushiu Maru. The article, which included statements by Captain Davidson and his second in command, reported the sighting of a strange creature in Cape Satano on the Island of Kiusiu, Japan. Captain Davidson, watched as a whale jumped out of the sea 1300 feet from his vessel. Although this incident may not have seemed so strange to a seasoned captain like Davidson, except the whale had something bizarre attached to it belly, a large creature that looked like a snake.

Captain Davidson and his men watched again as the whale jumped out of the water. This time the serpent became dislodged from the belly of the whale and Captain Davidson and his men got a better look at the serpent. The serpent was described as being as long and thick as a ship’s mast. For a few moments the creature stood upright in the water, and then sank back into the ocean. Davidson sketched the sea serpent putting great detail into the double finned tail. After that dramatic incident the serpent of Cape Satano was never seen again.

The sea serpent known as Cadborosaurus or Caddy is considered by many to be the most well documented cryptid ever recorded. With a list of credible eyewitnesses who all report a long serpentine creature with two humps, a horse-like head and a mane or crest on its head.

When examining the encounters with Caddy, sceptics are quick to dismiss the stories as being nothing more than misidentified marine animals such as whales that are in abundance in the waters off Canada’s West coast. However, their dismissals fall short of the mark due to the fact that carcasses have been discovered that just might prove the existence of this famous sea serpent.

Of all the sea monsters encounters that been witnessed, and reluctantly reported, none is more famous than the sea serpent reported by the Captain and crew of the HMS Daedalus.

August 6, 1848, as the Daedalus sailed between the Cape of Good Hope and Helena, Captain Peter M’Quhoe spied a curious sight which he later wrote in a detailed account to the Admiralty. M’Quhoe that a sea serpent was keeping pace with his ship as they sailed. The creature, of what he could see, was approximately 60 feet long with its head and four feet of its neck above the waves. He further wrote it was dark brown, with yellowish areas around its throat and what appeared to be a mane of seaweed on its head. The creature had no visible fins to propel it through the water as glided effortlessly passed his boat. Captain M’Quhoe stated that, “Had it been a man of my acquaintance, I should have easily recognized him with the naked eye.”

When Captain M’Quhoe filed his report, and the reports of others on his ship, he arranged to have detailed illustrations drawn up based on the account. These drawings and the report are considered to be the best most reliable record of an ocean going cryptid on record. They are also regarded as proof that giant snakes and oversized eels exist and call the oceans of the world home.

Can I share a secret with you, I really don’t fear much and it takes a great deal to rattle but as far as water is concerned I do fear that. Of course I can bathe and drink it without an issue, but getting me to step foot in a natural body of water can be a daunting task. And now just knowing that monstrous sea serpents are out there, somewhere, swimming that daunting task becomes an impossible one.