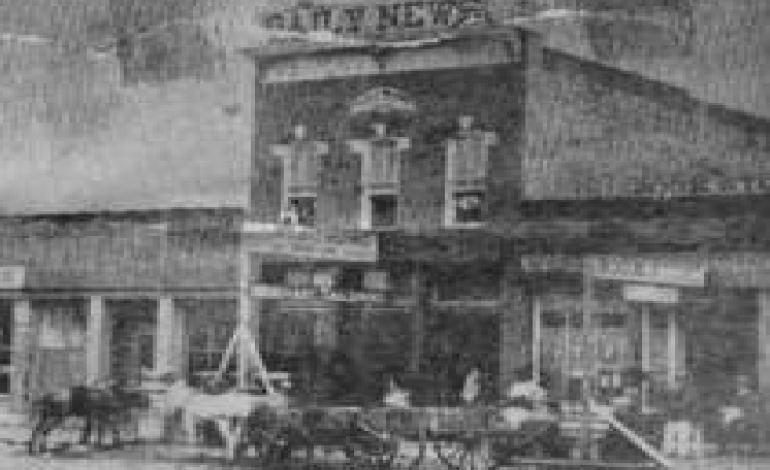 Contrary to popular belief, the first recorded statement concerning a ‘Flying Saucer’ was NOT made by Kenneth Arnold in 1947; in fact it originated from John Martin, a farmer who lived near Denison, Texas. The Denison Daily News of January 25th, 1878, had an article entitled: “A Strange Phenomenon”, it gives the following account:

“From Mr. John Martin, a farmer who lived some 6 miles south of this city, we learn the following strange story: Tuesday morning (January 2nd) while out hunting, his attention was directed to a dark object high up in the southern sky. The peculiar shape and velocity with which the object seemed to approach riveted his attention and he strained his eves to discover its character. When first noticed, it appeared to be about the size of an orange which continued to grow in size.

After gazing at it for some time Mr. Martin became blind from long looking and left off viewing it for a time in order to rest his eyes. On resuming his view, the object was almost overhead and had increased considerably in size, and appeared to be going through space at wonderful speed. When directly over him it was about the size of a large saucer and was evidently at great height. Mr. Martin thought it resembled, as well as he could judge, a balloon. It went as rapidly as it had come and was soon lost to sight in the heavenly skies. Mr. Martin is a gentleman of undoubted veracity and this strange occurrence, if it was not a balloon, deserves the attention of our scientists”.

On 24th June 1947, a search and rescue pilot from Idaho, USA, named Kenneth Arnold is widely…and incorrectly (as mentioned above) credited as the first person to describe an unidentified flying object as a saucer. Arnold, in the post-war wave of UFO hysteria in 1947 told a local reporter, and in turn, the Associated Press, that he was flying his plane near to Mount Rainier, which is part of the Cascade Mountains in the US state of Washington, and he saw about 9 crescent shaped craft in the sky and that they “flew like a saucer would if you skipped it across the water.” The reporter who, probably wanting a sensational heading to help boost his career had printed on the front cover a heading which read: “flying saucers seen over Mount Rainier”, and so thus the modern term ‘Flying Saucer’ was born, although that honour rightly belongs to Texan John Martin. So, Kenneth Arnold was actually misquoted by the journalist, Arnold did NOT describe the objects as saucer shaped, but described their strange movement, they “flew like a saucer would if you skipped it across the water”. Texan farmer, John Martin, from 1878 was also misquoted (yes, what a surprise…..even in the 1800s Journalists misquoted people). In this case also, “saucer” does NOT refer to the shape, but to the size of the observed object, because its shape was described as that of a balloon.

So did Kenneth Arnold see some of these planes, called the Parabola, that were built by the German brothers Walter and Reimar Horten? This plane certainly strikes a great resemblance to Arnold’s description. The German Air Ministry (RLM) had shown satisfaction with the Ho IX, 20 of the machine’s first model was ordered. Several other models were planned, including two-seaters for training, and night fighters equipped with radar.

The Horten brothers had developed a special revetment (covering), which was made of glue, soot, and charcoal powder, making this already furtive machine practically undetectable to radar.

I’m not saying this is what Kenneth Arnold saw, but it certainly fits his description, and this picture is from 1947.

Here are some other Horton craft: Arranged from left to right are models of four significant Horten designs: the pre-war Ho II, III, IV, and the single-seat Ho V.

On April 14th 1945, the American Army arrived at the production factory, ending the construction of what had been the first jet propelled flying wing.

One of these machines is located at the Smithsonian museum, in Washington DC.

Or did Kenneth Arnold indeed see real flying saucers which were piloted by advanced beings or flown by them via remote control?

Or did he see a natural phenomena known as Earthlights or Earthquake Lights? These lights are a reaction caused by the geological movement and can take place any time before, during, or after a seismological activity

Or did he see a few small lenticular clouds and mis-interpret them? They come in two basic types. In daylight there are lenticular clouds, which pile on top of each other to create an image like a domed disc. They are common in the desert plain areas but have formed on occasions in the UK. At night there are very strange noctilucent clouds, very high in the atmosphere and very slow moving, they are self luminous and glow in the dark a yellow or red colour. Scientists are still debating what causes them. These are very often mistaken for flying saucers.

This craft is alleged to be the Haunebu II, it is claimed that there were two prototypes built which were 25 meters/75 feet in diameter, had a crew of eight and could achieve an incredible initial velocity of 4,800 kph/2,983 mph, but at low altitude. It is claimed that further enhancement enabled the machine to reach 17,000 kph/10,563 mph.

Flight endurance was said to be 18 hours and to resist the incredible temperatures at these velocities a special armour called Victalen (translated as Frozen Smoke) was pioneered specifically for both the Haunebu and Vril series of disc craft. The Haunebu I had a double hull of Victalen which was developed in the 1930’s.

Whether you believe or not that the Germans were building and flying saucer shaped craft, the following exhibit is VERY interesting:

This is a document retrieved from the Central Intelligence Agency (CIA), it is dated 18th August 1952. It confirms that the Germans were building flying saucers, some actual wording on it states: “Flying saucers have been known to be an actuality”.

I digress to another Flying Object ‘non’ fact:

Let me make one thing perfectly clear - the Wright Brothers, Orville and Wilbur, did NOT invent flight. Flight was invented many years prior to 1903.

The history of lighter-than-air flight began with the first hot-air balloon built in 1783 by Joseph and Etienne Montgolfier in France. They were the inventors of the Montgolfière-style hot air balloon, globe aérostatique. The brothers succeeded in launching the first manned ascent, carrying Étienne into the sky. The brothers decided to make a public demonstration of a balloon in order to establish their claim to its invention. They constructed a globe-shaped balloon of sackcloth with three thin layers of paper inside. The envelope could contain nearly 790 m³ (28,000 cubic feet) of air and weighed 225 kg (500 lb). It was constructed of four pieces (the dome and three lateral bands) and held together by 1,800 buttons. A reinforcing fish net of cord covered the outside of the envelope.

On 4 June 1783, they flew this craft as their first public demonstration at Annonay in front of a group of dignitaries from the États particuliers. Its flight covered 2 km (1.2 mi), lasted 10 minutes, and had an estimated altitude of 1,6002,000 m (5,200-6,600 ft). Word of their success quickly reached Paris. Étienne went to the capital to make further demonstrations and to solidify the brothers’ claim to the invention of flight.

The Montgolfier model above can be viewed at the London Science Museum.

In fact, on 24th September 1852 Baptiste Henri Jacques Giffard made the first powered and controlled flight travelling 27 km from Paris to Trappes in his airship that was filled with hydrogen, making it powered with a substance ‘lighter than air’, it was steerable and powered with a 3hp steam engine that drove a propeller. The wind was too strong to allow him to make way against it, so he was unable to return to the start. However, he was able to make turns and circles, proving that a powered airship could be steered and controlled.

However, on the 17th December 1903 Orville and Wilbur Wright were the first to sustain a controlled, heavier-than-air powered manned flight, which had to have four things working in conjunction with each other to qualify, which were: (1) the flight had to be sustained; (2) the craft was manned; (3) it was heavier than air powered; (4) and to some degree – controlled.

Orville and Wilbur were also the first to build and fly experimental aircraft and they were the first to invent aircraft controls that made fixed-wing powered flight possible. The brothers’ fundamental breakthrough was their invention of a three-axis control, which enabled the pilot to steer the aircraft effectively and to maintain its equilibrium. This method became standard and to date remains standard on fixed-wing aircraft of all kinds.

There we have it – some ‘non’ facts laid to rest.