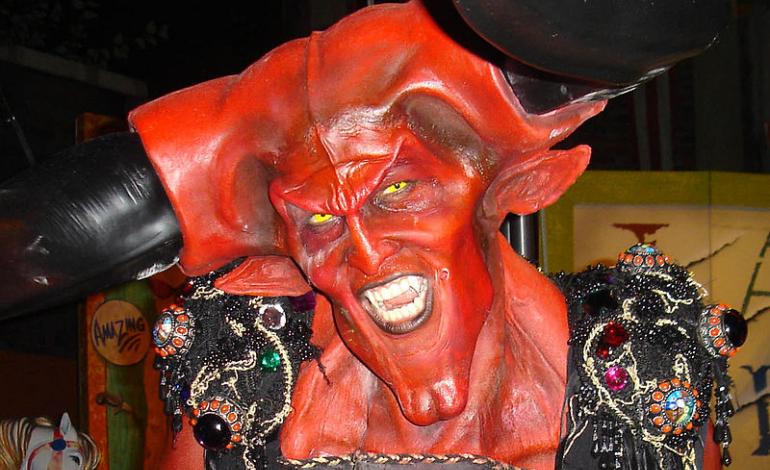 Why speak about the Devil? Some sources say nine million women and men may have been killed in Europe due to the Witch trials. Witches that according to church and state were in league with the Devil. Millions of souls tortured and drowned or burned at the stake. This central figure of the Devil is certainly in need of research.

What or who is the Devil? We call him, and note the sex “him”, Satan, Shaitan, Lucifer and even with the friendly name Auld Nick. Is he a dark deity, a fallen angel, a bringer of light or a personification of evil known by many cultures and given a name just to make it more understandable and tangible to mankind. There is another suggestion. Is the Devil a fearful construct by religious authorities to keep its flock under control?

Looking East If we look east for a few minutes, in Buddhism we have Mara who tried to tempt the Buddha with beautiful women. Mara is “unskillfulness” and the death of the spiritual life. So perhaps Mara is more a sense of temptation that freezes your spiritual path. Buddhism was developed from Hinduism, perhaps the oldest faith in the world. In Hinduism however there is no devil, no supreme evil deity, opposed to all good.

Ancient Egypt where does the Devil have his roots? Ancient Egypt and the God Set is a good place to start. Many of us know of the deities Osiris and Isis and their son Horus. Osiris was cut up into 13 pieces by Set. Isis finds all but one piece, his phallus. The son confronts Set and destroys him. Isis meanwhile restores her husband, minus his virile member and Osiris becomes lord of the Underworld. Set is Horus’s uncle.

We need to learn a bit more about Set before we proceed for it is not “evil” that Set personifies but fear, hidden unfathomable fear. Set was God of Storms, deserts, disorder, violence and foreigners. The Sun God Ra had a solar barge, his celestial ship and Set’s Godlike role was to be aboard and repel Apep, the serpent of Chaos from swamping it. Set was the Lord of the desert, the red sand and Horus was the Lord of the Black earth, the fertile ground of growth. Myth tells us there was a homosexual episode with Horus and uncle Set. The end result was the birth of the Moon God and God of Scribes and Magic, Thoth. Set has his own temples and his followers had settlements that were powerbases, just like Ra, Osiris, Isis and Horus. Perhaps in Set we find the origin of the Devil we know today.

Abrahamic Religion the three Abrahamic faiths are Judaism, Christianity and Islam. This is where we of the west know the Devil best of all. Judaism first and this is extremely short. In mainstream Judaism there is no concept of a devil.

Islam I certainly do not wish to short change Islam’s coverage of this subject as I feel it is of extreme importance. In Islam we hear the name Shaitan, which is referred to as Satan. More correctly we should refer to this entity as Iblis as this is the name that appears more in the Quran than any other for the Devil. In many things Islam is very clear and concise; this is the case with Iblis. Iblis is a jinni who refused to bow to Adam. The primary characteristic of the Devil, besides hubris, is that he has no power other than the power to cast evil suggestions into the chests of men, women, and Jinn, although the Quran does mention appointing Jinn to assist those who are far from God in a general context. “We made the evil ones friends, only to those without faith.”

I should say to those who are not versed in Islamic terms, in Islamic teaching God created three intelligent beings, Angels, The Jinn and Humans. The latter two were granted free will to choose a path of good or evil. Angels on the other hand could only adopt good. However God created Adam as the “best of creation” and all but one Angel bowed to him. This was Iblis and God cast him out of Jannah “paradise” with the intention to punish him by casting him to Hell. Iblis begged God to delay this punishment to which God agreed to delay it to the last judgement. “It is We Who created you and gave you shape; then we bade the angels prostrate to Adam, and they prostrate; not so Iblis; He refused to be of those who prostrate. (Allah) said: “What prevented thee from prostrating when I commanded thee?” He said: “I am better than he: Thou didst create me from fire and him from clay.” —Quran, sura Al Araf – The Heights It is only after being cast out of Jannah does Iblis gets called Shaitan. It is said Shaitan and his minions are whisperers and this is what puts the desire to sin in the hearts of men and women, this whispering into the chest giving us the knowledge that sin comes not from being born in sin as is the Christian thought, but you are born free of sin and that Shaitan injects it into the equation.

Christianity Now we come to the Christian idea of the Devil. He is the fallen angel, the rebel against God, the Serpent in the Garden of Eden, the Accuser of Job and the Tempter in the Gospels and the Dragon in Revelation. The name Lucifer in particular is of interest. In Isaiah 14:12, the Devil is described as the Morning Star. The Morning Star is Lucifer, physically it is the planet Venus, and Lucifer is the Light Bringer. In Luke 10:18 we read “I saw Satan fall like lightning from heaven.” The Light Bringer. There is a big problem with Lucifer as the Devil. A bringer of Light, Knowledge or Truth is surely not a bringer of evil? Lucifer is also a God of the Ancient Roman Pantheon, who along with Diana the Huntress and her Daughter Aradia were worshipped by the Strega, the original witches who were believers in the remnants of the old Roman pagan religion. Not in any sense interested in any antichrist of any kind.

American folklorist Charles Godfrey Leland in 1899 published his work Aradia, or the Gospel of the Witches, which he believed to be a genuine religious text used by a group of pagan witches in Tuscany. In Leland’s Gospel, Aradia is portrayed as a Messiah who was sent to Earth in order to teach the oppressed peasants how to perform witchcraft to use against the Roman Catholic Church and the upper classes.

Baal There is another crossover of deities in Matthew 10:25, Matthew 12:24, Mark 3:22, and openly in Luke 11:18-19 where there is an implied connection between Satan and Beelzebub. This deity originally being a Semitic deity called Baal, and referred to as Baal-zebul, meaning lord of princes).

Baal was also a far reaching God with Druidic festivals such as Beltaine, driving cattle through bel fires to cleanse them and even Bel fires being lit by young men on mountain tops on the 1st of May in the Scottish Highlands. Even the famous Rob Roy MacGregor did this in his youth in the 17th century. So Baal has a very long reach.

Remember the name Baal-zebul meant Lord of Princes, Beelzebub is lord of the flies and this is the name that has been handed over to be that of Satan. In the Bible with recognition to Job and Zechariah the title “the Accuser” is given to the Devil in the New Testament 32 times.

Old and New Testament As we mentioned earlier, Satan is hardly referred to in the Old Testament. Considering how immense a stature the Devil has, for the Jews not to really see him as worth mentioning in the vastness of the Old Testament, why does he appear with great regularity in the New Testament? There is the obvious reference to the Temptation of Christ which features in Matthew 4:1-11, Mark 1:12-13 and Luke 4:1-13. According to these texts, after being baptized, Jesus fasted for forty days and nights in the Judaean Desert. During this time, Satan appeared to Jesus and tempted him. Jesus having refused each temptation, Satan departed and angels came and brought nourishment to Jesus.

There are also many references to spirit possession in the New Testament including that of Satan using Judas Isariot as a host just before Judas’s betrayal. In the Letter of Jude there is a curious reference made to the Archangel Michael arguing with the Devil over the body of Moses. Of course we will obviously come to Revelation, or properly put, the Revelation of St John when all Hell breaks loose. Satan according to this work will wage a final war against Jesus, before being cast into Hell for eternity. Interestingly and I do feel this in very worthy of note, a few early Church Fathers are known to have prayed for Satan’s eventual repentance.

Witchcraft Fear of the Devil and of Hell is responsible for much bloodshed and anguish in Europe in particular. While the Devil is involved it is fair to say he was not the protagonist of this swathe of deaths, it was down to mankind and mankind alone.

From the 13th to 17th century Witchcraft was a heinous capital offence. The legal profession and church thought at the time was that a Witch was in league with the Devil. To become a witch you would have to go to a Witches Sabbath, more than likely in the woods late at night where the Devil would initiate you by biting you in a special spot. This was the Witches Mark. So any skin blemishes and you would be in the frame.

However proof was required to say that the mark was made by the Devil. A Witch mark had one of two special qualities. It would either not cause pain if pierced by a large needle or it would not bleed. This gave rise to the occupation of Witchpricker. Men who had a dark knowledge of anatomy. Like an Acupuncturist in China would use their knowledge to heal. In Europe and in Scotland in particular this knowledge was put to use in proving someone was a Witch.

You were asked to confess first of all. Many would not; essentially if they did they would still be put to death. They just omitted the terrible mental and physical tortures. So why not confess? A witch would not be buried on consecrated ground and the common thought was, this person would not reach heaven. So torture was accepted. From fingernails being ripped out, bones crushed to sleep deprivation and muscles and flesh ripped apart by the rack. Just about all cases were hearsay, people who disliked others, coveted houses, husbands, wives and the whispers started.

Gnostics Today Gnostic sects still exist, some thought the Serpent of Eden was a giver of knowledge and that Lucifer the Light Bringer was created by a Goddess called Sophia. Sophia means knowledge. This features in the Nag Hammadi texts where he is even described as the “Beast” however he is never deliberately called Satan.

The Devil is deeply engrained in popular culture and used and abused for a number of reasons. So to go back to the initial question, why talk about the Devil? Perhaps the question should be changed to a statement with the addition of a word from the Gnostics, “We should talk about the Devil with knowledge”