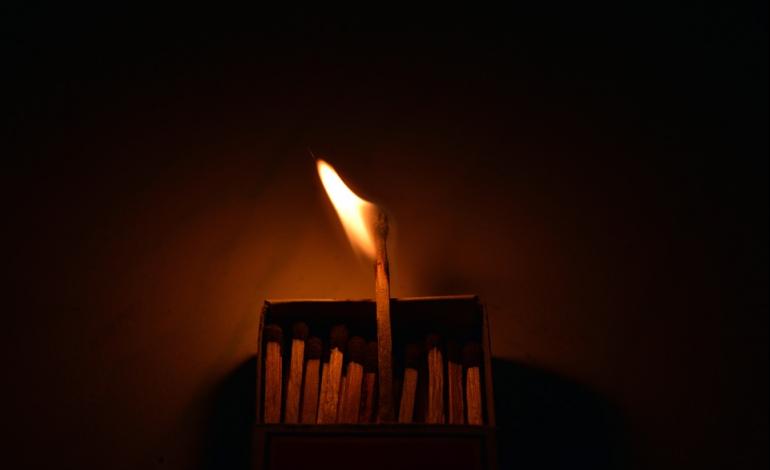 I have always known that animals are very receptive to paranormal activity. They sense and see things that are out of the human range but I never thought that our dog Paddies would be as receptive as he has been of late.

I think that it has always been there with him but we have noticed more over the last few months by observing and watching him, after some strange things have been happening in the bedroom. At first I asked Paul if something may have followed me home from an investigation (even though I felt that this was unlikely because of the way we ‘close down’ after each investigation) but I was still concerned that perhaps something may have stayed with me.

Paul said that I have nothing to be concerned about. I was not worried but amazed at the odd things that started to occur and are still occurring. To me it was fascinating.

The first strange thing occurred one morning while we were still sleeping. The bedroom door opened with an almighty shove. This made both Steve and I jump up out of bed as we wondered what the hell was going on. After checking to see if any windows were open (they were not), checking for a draft (there was not one) we looked to see if it was someone who had shoved the door (there was no one). So we closed the door and got back into bed and thought nothing more of it.

The next odd thing happened while we were watching TV late at night. The TV turned itself off in front of us. This made me wonder if this occurrence was connected to the door that had opened previously. Paddies was looking at the TV before it went off but this was not unusual for him. He sometimes looks at the TV like that. But was he looking at someone turning the TV off? Was there a rational explanation like an electrical fault? The TV has never done this before so I decided to keep an open mind.

The third thing that happened was the lamp next to Steve’s side of the bed turned itself on. We were both in the room and it made us jump but not in a scary kind of way. We could not figure out what was causing this? Again could it be electrical, or something other than only Paddies can see?

At times Paddies will be lying down and he will suddenly jump up. This has been witnessed many times. It is as if he is watching someone or something. His eyes will follow whoever or whatever this is around the room. He does not even flinch if you put your hand in front of his eyes. He will try and regain his fixation on whatever he is looking at. This happens quite often. But to be honest I do not feel that this house is haunted so we have named this person as ” Paddies little visitor.”

Steve came home from work after an early shift, I was still at work. Steve phoned me and said that Paddies must have had a visitor today as the lamp was on again. We have had this lamp checked out and nothing was found to be faulty. The TV and door have never opened or turned off and this prompted me to wonder if this visitor now knows that we have acknowledged them, is the sign of the lamp just to let us or Paddies know that they are there?

Paddies is the ripe old age of 16 now and he acts like he is 8. He is full of energy and vitality at times but he is also in his twilight years so he spends a lot of time curled up in his favourite basket. I am sure that the mystery visitor is connected to Paddies, perhaps his previous owner? We have only had Paddies for approximately 5 and half years. When I went to get him I discovered that in one month he had lived in 5 different homes. He was so stressed that he had no hair on his face whatsoever. Maria took me to get him and I remember saying that I fell in love with him right away and he would get the best of everything. Perhaps most people may prefer a younger dog but having an older dog is a wonderful experience.

Paddies used to belong to an elderly couple. They had to give him up as they had to move into an elderly care home. That is the only history we know about him. We have given him the birthday of 15th January as that is the day he came to live with us. I really wonder if the mystery visitor is one of the couple who owned him. I have no way of tracing back to see if they are still alive or not but I like to think that maybe his visitor is one of his previous owners checking on him, to see if he is ok and being looked after.

I have so many questions about this visitor which I hope will be answered soon. It would be a pleasure to know who is Paddies visitor, who is it that comes to see him, who is it that he is seeing and follows round the room.

Update: Since this story first appeared, sadly on January 6th 2005 Paddies passed away just short of what would have been his 17th birthday, Steve and I were with him when he passed in our arms, both Steve and myself could not have asked for a more loving pet to have had in our lives and we are cherished with the memories we have of our time together until we meet you again.