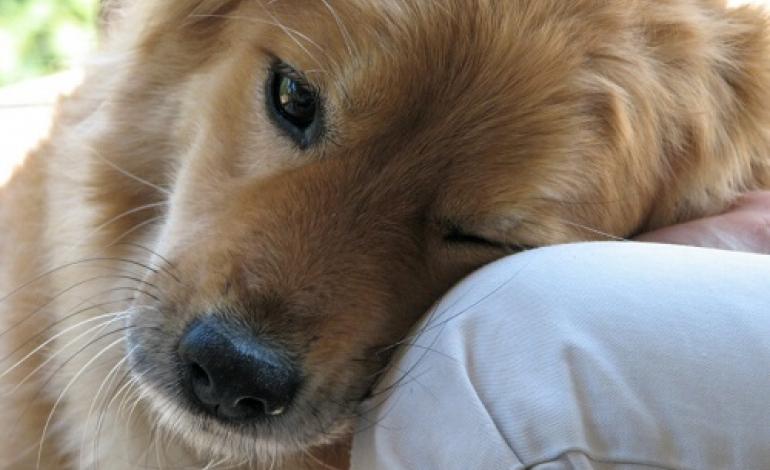 I have always loved animals, a real deep love for them. Ever since I was a small child I just related to them. Dogs, I just worshiped them. I would look right into their eyes with love and excitement.

when he knew that I was coming to the house. We sort of hung out if you like.

One morning when I was about 15, I woke up from a dream in which my gran’s dog was present. In the dream, I was just leaving my gran’s house, on a regular visit with my parents. As I was going out the door, I told Pooch to get up on his chair at the window, to see me off. As he did, I noticed he was limping. He held up his front right paw. I told my gran, Pooch was holding his paw up. He must have hurt it. She said, “Oh, he must have hurt it in a fight”.

Well the following Saturday afternoon, just as I was leaving my grans house, this actually happened.

I told my parents about it. They didn’t seem to be that interested though. This was the first of many dreams that were to come over the years. A few years late, when living in

, I had a neighbor’s dog that used to visit. He was a little Silky terrier. I have no idea how old he was. He first appeared on New Year’s morning about 1983. We didn’t know his name, so we called him Angus. This dog became a

to our house. I do not recall how long he visited us for. A few months I think. Then one morning I woke up after seeing him in a dream. In the dream he was standing at the front door as usual. But in the dream there was a white mist around him. He told me that he has to go away. I felt so sad at him leaving. When I woke up I was upset about Angus leaving. I informed my parents of the dream. This time they listened to me. My mum just knew that this was indeed Angus leaving us. We all missed him for a long time after that.

In recent years, I have had many animals come to me in dreams, for one reason or another. I also see Animals in spirit often. I see them more solid than I do humans for some reason. I just put that down to pure love for animals. With my own fur babies, I have a strong

bond. They tell me when I should be home from shopping or visiting friends. When they are outside and want back indoors they send me a mental image. As soon as I go to the door, sure enough there is one of them waiting to get in. I had a

called Sparky, he passed a few years ago. When he was ill, I called in the Shaman spirits, to help him cross over. My other little dog, Gromit and all my cats were present through the healing session for Sparky. They could all see what was happening around Sparky. The next evening I took Sparky to the vet to have him put to sleep. My husband came with me to say goodbye to Sparky too.

In the Vet’s surgery, I called the Shamans yet again. The room was charged with spiritual

as the Shamans and some of my loved ones in spirit were present, including my Mum and grandparents. I had never seen so many spirits present in the room. At the precise moment of death, I saw Sparky leave his body. The dog’s soul looked nothing like an animal. More like a purple and black sparkling and pulsating eye, type of shape. In an instant he was gone. All the lights in the room went dim, and then the whole room had a feeling of calm and neutral energy. I asked the others present if they felt anything. Both the Vet nurse and my husband said, yes, and both said they also saw the lights all flicker. I told them that was Sparky leaving the earth. All the spirit beings left at the same time. Sparky did leave us all with a lovely gift when he departed too. I saw him from a tiny puppy up to his final moment. I could see it through my third eye like watching a DVD. Sadly our vet was too preoccupied to witness this. He has had his own paranormal events after that though. Now when my husband and I got home, I asked my sons if the felt or heard anything in regards to Sparky. They both confirmed they had felt his presence and like myself and my husband. They too were left with little visions of him.

I knew that Gromit would go 12 months or so later, which he did. It is not nice to know these things though. This is where the gift can become a cures. Gromit had different health issues, so we had to make a judgment call on when to let him go. Not a pleasant thing to do for any one. When I took him to the vet, my oldest son came with me, as Gromit was his dog. After leaving the vet’s surgery we drove home in silence. But lo and behold, as soon as we drove up the driveway, I saw Gromit rush out of the car and run up to our front door. When I got out of the car, I turned to my son and asked him if he noticed anything strange. To which he replied, you mean like Gromit just running up to the door just now? I laughed and said, oh, you saw that too.

Over the past few years I have seen both Sparky and Gromit in the house and heard them barking. I see my mother’s dog too, when he pops in for a visit. I have tripped over Sammy, my mother’s dog on several occasions. One that springs to mind was, on a late night emergency to the hospital, with a friend that was staying with us. As soon as I opened the front door, I saw a dog run out. I yelled to my husband, “Help, Gromit has just got out”. He called back, Gromit was sleeping next to him. Sammy was the dog that ran out the door. Sammy died back in March 1999. Sammy and Gromit looked similar in colour and size.

Quite often when I am asleep and out of body, my cats or my current little dog, Ruby are with me. I really enjoy their company. I cannot bear to be without my fur babies. They are a huge part of my life. It is also quite common for me to see client’s pets that have passed on, and pass on loving messages to them from their beloved fury family members. I also tune into lost pets for clients. Mostly with happy results and being reunited fur babies and fur parents. I too have been in the situation many years ago, when one of my cats went missing for 3 weeks. It was heart wrenching for all the family. Lucky for me, I just knew that I would get Tolstoy, my cat back again. I could connect to him in dreams, but had no idea where he was though. I just knew that I would get him back. When I did I was over joyed. He was locked under a house that had just been vacated. He was thin and very hungry. His voice was so feint when I called out to him from over the fence of the house. I could see his tag on his collar shine in the sun light, at the wooden gate, under the house. So I rushed in to the garden and rescued him. I will never forget that day ever. Thankfully now we have a big cat run and none of our cats are in any danger of being lost or worse. The pain of losing an pet is unbearable for me.