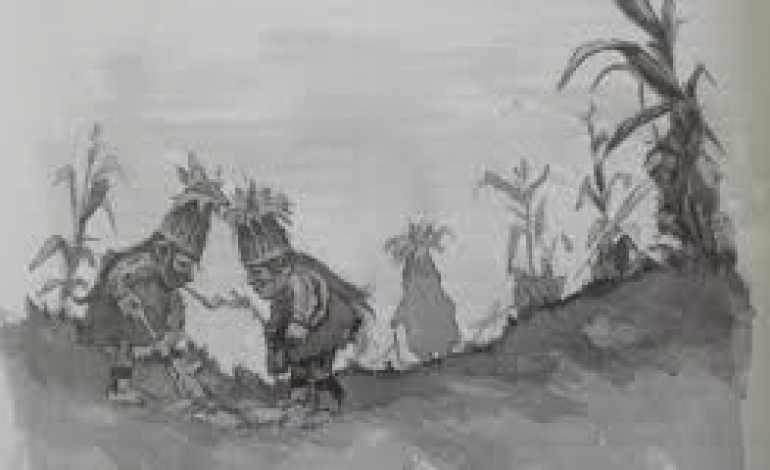 When the European settlers came to the new world of the North American continent, they discovered that it was already populated by the many tribes of Native people. The early settlers discovered that these people lived in harmony with nature, and considered everything from the forests and the majestic mountains had a spirit all their own. They also soon discovered that these native peoples had tales of nightmarish creatures that haunted the landscape and were to be avoided at all costs.

The early settlers believed these creatures to be nothing more than mere myth, old stories to explain the harsh elements they faced. They would soon find these monstrous creatures were more than just myth but rather something to fear. These are a few of the bizarre creatures that both Native and colonist feared.

The Little People of the Hills

Many paranormal researchers are well acquainted with the legends of the little people of western European mythology. However, it would appear that small fairy-like beings, the Yunwi Tsundsi inhabit the hill country of Tennessee. Horrible little creatures that haunted the Cherokee making their lives miserable.

For centuries, Cherokee children were raised to avoid the hills and mountains of the shirt statured creatures said to hide among the cliffs and caves if the Smokie Mountains. The Yunwi Tsundsi were said to leave their caves and drag wayward children to their underground realm where they would live out their remaining years in constant torment.

Like the fairy folk of Europe, the Yunwi Tsundsi are said to be no taller than 2 feet and appear and disappear at will. Only people with a special gift are said to be capable of seeing these creatures with long flowing hair and dirty white gowns. It is believed among the Cherokee, medicine men capture the Yunwi Tsundsi for menial housework and spell casting.

Travelers to the hill country of Tennessee have reported seeing the wispy shape of a small human being following them closely watching their every move. Others have reported being physically assaulted by the mischievous little people. Some anthropologist believe that the parallels between the Yunwi Tsundsi and the fairy folk of Europe goes beyond mere coincidence and theorize the Cherokee may have borrowed the European fairies for their own legends.

In 1926, miners excavating bat guano in a Lovelock, Nevada cave made a strange discovery. After blasting through layers of bat feces, they discovered a cave with strange skeletons with very unusual features. The skeletons, measured in size from six and a half to eight feet in length. Far too tall to be of Native American origin. Researchers were going to dismiss the remains as nothing more than excessively tall natives. But there was one detail that forced them to rethink their assumption, the colour of the skeleton’s hair.

When researchers examined the skeletons, they discovered the skeletons had bright red hair. A hair colour not found among Native American people. Researchers were puzzled at who these mysterious people could have been, and how they came to be in the cave. The local tribes had a theory. A theory that sent chills down their spines.

Shortly after discovering the skeletons, the Paiute Tribe was contacted and asked who they thought the remains belonged to. When the Tribal Elders heard about the skeleton’s red hair they were shocked and terrified. The Elders demanded the skeletons be returned immediately to the place they were discovered. When pressed for an explanation of their demands, the Elders opened up and told the researchers of war between their ancestors and a creature that should not exist.

The elders explained that long ago when the Paiute came to the region, they discovered the land was in the possession of horrible red haired monsters that lived as animals. These creatures, although man-like in appearance, did not possess magic or fire. Primitives in every sense of the word.

After telling their ancient story, Paiute elders warned that taking these bones from the cave would bring about a curse and the return of the Si-Te-Cah. Upon request of the Elders, the skeletons were returned to the cave and the cave was sealed up to keep the legend of the Si-Te-Cah safe from future discovery.

Monstrous, shapeshifting beasts that howl at the moon and stalk the countryside for human flesh has been a staple of European folklore for centuries. Even today, the werewolf is still feared in certain areas of Eastern Europe and is believed to be a very real creature to be feared. If such a monster exists it would seem that it has a cousin among the Inuit of North America.

According to Inuit legend, a young woman left her village and mated with a giant red haired wolf. After 9 months the young woman gave birth to 10 offspring. 5 were cute, cuddly little wolves. The other 5 were monstrous flesh eating beasts called the Adlet. The Adlet are believed to have been born with attributes of both wolf and man. The Adlet are covered head to toe in thick red fur like their father with a ravenous appetite for human flesh. They also walk upright and have the cunning of a man. A dangerous mix indeed.

The Inuit people fear going into the forests and tundra at night believing the Adlet stalks the snowy wastes seeking an unwitting human to devour. Unlike the shapeshifting monster of European folklore, the Adlet maintains its wolf form. To this day the Adlet is feared among the tribes of the north.

In 1878, Saskatchewan, Canada the citizens of the province were witness to strange trial and execution of a terrifying man who committed unspeakable acts of murder and cannibalism. In the winter a Plains Cree trapper, Swift Runner, surrendered himself to authorities claiming he was possessed by the spirit of the wicked Wendigo. Swift Runner confessed that he Murdered and devoured his beloved family when they ran out of food and the Wendigo took him over.

When investigators went to his home they found a grossly scene, the half-eaten bodies of his wife and five children. Swift Runner was quickly found guilty of the heinous crimes he confessed to and was executed in front of the entire village. The trapper’s body was buried far away from the town as it believed the dreaded wendigo could leave his body and find another host to inhabit.

Among the Algonquin Nation, there is much debate in what a Wendigo actually looks like. Some believe it to be a giant fur covered monster related to the Sasquatch of the Pacific Northwest. Others describe a tall, pale gaunt looking creature with bony extremities and a bright star fixed between its eyes. Whatever it’s physical attributes the Wendigo strikes fear into any brave warrior’s heart.

A few years ago, a book was released that detailed the harrowing story of a Utah ranching family experiencing bizarre activity on their land. Huge wolf like creatures dragged cattle away, UFOs appeared in the skies and doorways that seemed to open into other realms of existence were seen in the sky over the ranch. The family in the book, “Hunt for the Skin walker” was told their home stood in the path of a wicked being called a Skin walker, an entity that is found in the folklore of the Native tribes of the American Southwest.

To the Navajo and the Apache, no creature is feared more than the Yee Naaldlooshii, more commonly known as a Skin walker. Although horrific and nightmare inducing the Skin walker is not a creature in the strictest term. But, rather it is a human being that has attained a certain level of knowledge in black magic. This Skin walker is believed to be able to take the horrific shape of any one of the desert animals they see fit to spread famine and pestilence on anyone they deem an enemy. The Skin walker is fear personified.

For years historians believed that witch trials and executions were unique to white European settlers and their Christian religion. However, in the 19th century white settlers in the American Southwest heard a disturbing story of a Navajo war party that hunted down and slaughtered a group of men and women who left the tribe and formed a group called The Witchery Way. The war party believed this group was a secret cabal of Skin walkers. They believed these Skin walkers brought hunger, disease and the violence if the white man upon their land. When the war party was finished 100 men and women were rounded up, beheaded and set aflame.

Although the Navajo and Apache fear to speak the Skin walker’s name as they believe it will bring a curse, the white man is said to have been victimized by this wicked practitioner of the dark arts. While on vacation in New Mexico a family disturbed a Skin walker and were tormented for several weeks with horrific apparitions and poltergeist activity in their home. It wasn’t until a Navajo holy man blessed their home and banished the Skin walker back to the desert.

Many anthropologists believe that these monstrous creatures inhabit a spiritual land and do not exist outside folklore. However, Native Americans would argue that they are familiar with every creature that calls the land, sky and water home. These monstrous creatures are just as much a part of this reality as the humble beaver, the noble hawk and wise brother bear