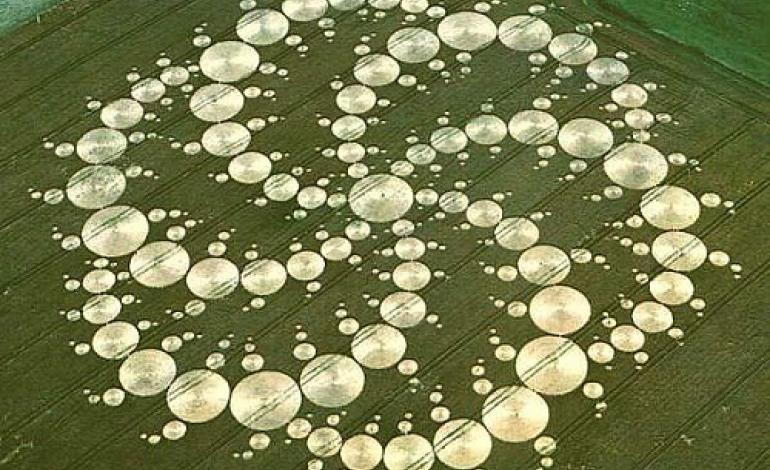 As a counselor for alternative occurrences, stories of aliens and lights in the sky abduct my daily research quite often. Many of those who believe they’ve been abducted show similar symptoms, but rarely is that symptom the presence of a crop circle in their yard. Though many could argue that those abductees do not have yards or property and therefore the possibility isn’t feasible but without much mention of these geometric oddities and the growing decline of farmland, are crop circles still a ‘paranormal phenomenon’ or where they a dying product of the horror and sci-fi genre? The truth is crop circles still make their appearance across the globe and statistics of those reported shows crop circles appear on average about 110 times through a calendar year. From Norway to England and yes, even the United States, a strange phenomenon is still leaving its mark that a presence still exists.

It is no surprise that many theories exist about the possible explanation of these unique geometric shapes left on our planet’s surface, but what has come of them and where do you stand on the phenomenon of crop circles? From copulating hedgehogs to parasitic crop fungus (Marasmus ordeades or Clitocybe gigantean), people have stated the cause of these haunting monuments left pressed into the land could be as simple as teenagers gallivanting in the dark with planks on strings. Regardless of your theory, the fact remains that they are to this day still considered an unexplained phenomenon. Firstly, to come to your own conclusion, it is important to have a somewhat firm grasp on what a crop circle really is. Common sense would tell you that clearly it is a tampering of crops, but crop circles by definition are geometric patterns, often very intricate and complex, appearing in a field. Now, the psychologist in me wants to make it clear that a crop circle absolutely does exist and you can even visit them as most have become tourist attractions across the planet. Crop circles associated with extraterrestrials however is a completely separate rabbit hole that links the geometric shapes to the dark corners of the paranormal realm. As early as the 17th Century, farmers were documenting the ‘mowing Devil’ as he left their crops in disarray in the night. Documentation of the crop circle phenomenon is quite old, dating far beyond the entrance of modern technology, that which now lets us be aware of their presence and the statistics about them.

Perhaps the reason so many people associate them to extraterrestrials is the mindset that from a standing eye-level, the ground simply looks flattened, burned or tampered with. It is not until the viewer gazes down on the masterpiece from the sky that they see just how amazing the crop circles can be. Though some researchers account the crop circles to being vortices of energy, magnetic fields or other natural phenomenon we don’t quite understand, it is the parallel to local sightings of lights in the sky and the ‘other’ characteristics of these patterns that make them alien to the everyday farmer. One unique complication that bends the theory that these crop circles could be make by pockets of wind or quick circle makers in the night is the intricacy and complexity for which some crop circles are made. The stalks of crop bend both counter clockwise and clockwise and in many cases, layers of stalks lay sandwiched upon one another and bending in both directions yet in a clean, organized, and intricate manner. Withering crops are not broken or damaged but simply lay parallel to the Earth in their precise formation. Some of the circles are geometric designs, geometric patterns of beauty, ancient symbols of civilizations passed and some are even mathematical equations solved from the sky. It is the precise way in which crop circles appear that makes it clear the average farmer hasn’t just materialized a vast knowledge of Euclidean geometry for the sake of getting some attention.

Aside from the complex knowledge and effort it takes to make a crop circle, there is also the belief that it might actually take the craft of an extraterrestrial or advanced technological efforts to create the crop circle to begin with. This belief is by far the most controversial but those that believe crop circles are left behind by alien beings believe the signs in the crops are either imprints from their spacecraft or even marks of their presence, like a signature or message to others. Whether you believe the space craft theory is the most likely conclusion to crop circles or not, one skeptical addition to this belief is that the theory of the wind vortices explains that dust particles when spinning in high momentum become charged air, they can appear to then brightly glow, which may explain the UFO-like glowing lights many witnesses have seen near crop circles and that aides to the belief they are alien crafts from the sky. So those that believe the circles are left behind from extraterrestrial sources due to the lights in the sky and the detailed messages they leave behind.

Crop circles, whatever the cause, are reported to appear most frequently in the area near Avebury and Stonehenge in southern England; coincidently very spiritual locations. Researches come from afar with their EMF detectors, photo and video equipment and interview those in the area in hopes of finding out more information what creates these elusive and mysterious marks. Those in the paranormal are familiar with chasing an elusive mysterious effect without quite knowing the cause but the crop circle’s magnitude alone makes it a uniquely haunting experience.