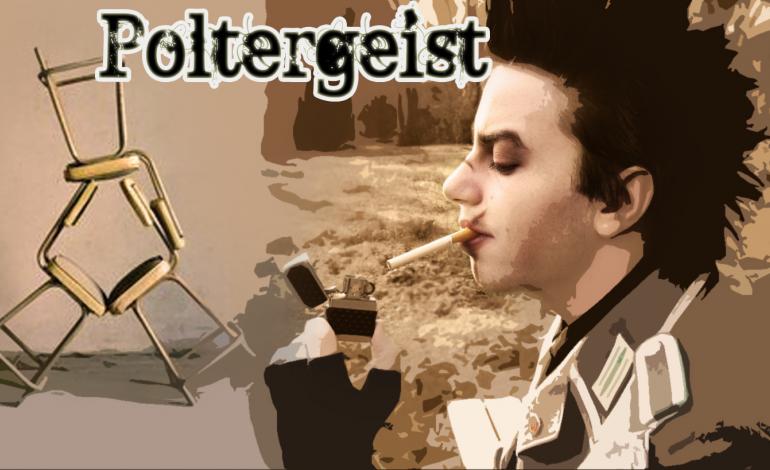 For some, it might be the hissing in the television at night as the program ends and the paradolia that comes from the muddled screen starts to sound like voices. For others, it is the movement of something in the peripheral vision that not only makes you snap your head and stare for longer than the usual few moment but also makes the skin crawl. For my sister it was the branches in the tree outside her window gently clawing on the siding and making a more than personified evil grin;

I could never feel comfortable when the shower water spiked to scolding hot. However, none of these examples are the classic or usual symptoms of an alleged Poltergeist and instead are a manifestation of fears that are planted by Hollywood movies. When people call me and suggest that they have been experiencing a haunting of a Poltergeist in their home, I’m always wondering what this looks like to them. For me, I’m interested first in linguistics.

The word, “poltergeist” is defined in the Webster’s Dictionary as: “... a noisy and usually mischievous ghost: a spirit capable of making mysterious noises and is of German decent. The word itself derives from German cultural superstition and the roots of the word can be broken down to further explain just what their experiences of Poltergeists were. The first half of the word, polter-, derives from the verb poltern, which means “rumble,” “to make a noise,” or “bluster” and thus creates the association to those hauntings which include loud and scary noises.

The second half of the term, -geist, means “spirit, apparition, or ghost” and therefore explains the association to the supernatural or afterlife. Thus, the two halves of the term combined as a whole represent the traditional cultural image of a “noisy spirit.” In present day, these cultural beliefs still linger to some degree through the exaggerated and misguided depictions of Poltergeists in television, film, and in popular horror media. But is it connected to the spirit world or afterlife at all?

Interestingly enough, though Poltergeists are considered to grow from the source of an angry spirit by most, the field of parapsychology usually associates such phenomenon as more of a human manifestation. Considering the cases highlighted through studies in the Parapsychological Association, a recent publication by Bryan Williams and Annalisa Ventola illuminates a more scientific definition adopted by the parapsychological field that creates a more person-oriented view of the Poltergeist phenomenon.

A poltergeist is a large-scale form of psychokinesis or “mind over matter,” in which anomalous physical phenomena (such as moving objects, electrical disturbances, and noises without any obvious source) repeatedly occur in the presence of a certain person over a brief period of time. This large-scale form of PK, which occurs largely on the unconscious level, is known as recurrent spontaneous psychokinesis, or RSPK, and the person around whom the phenomena occur is known as the RSPK agent.

This view of the Poltergeists is not proving causation of what the phenomenon is precisely but instead is utilizing correlations of research that suggest Poltergeist phenomenon is almost always associated with a particular person; the symptoms ceasing when the individual is removed from the environment. In this exploration, the popular Hollywood movie Poltergeist, actually prevails at associating the phenomenon around a young psychic child. Without the ‘beacon of psychic energy’ that the young white-haired girl encompassed one must ask if the house built upon burial grounds might have become alive at all.

Studies on the phenomenon of Poltergeists still struggle to definitively nail down the source of the stacking of chairs, moving of objects and loud noises but the RSPK agent is one factor that usually remains constant from case to case. A pre-teen individual, much like a Drew Barrymore in Firestarter, remains the pillar of the Poltergeists phenomenon (not a demonic entity or negative force like most surveyed participants were said to believe, though teenagers can be quite horrendous to live with).

Loud noises, knocking, and moving of objects is recorded most frequently (almost 90% of the time) whereas apparitions and figures are said to occur less than 17% of the time. Poltergeists might possibly be the projection of inner stress, discomfort and the adjustments from childhood to adulthood. Although apparitions/spirits are sometimes witnessed in Poltergeist cases, the published research indicates that this tends to be rather uncommon. Furthermore, those cases that do experience visual anomalies, do not always appear as human figures.

Instead, they manifest as animals, limbs, rolling mists and shadows (not the old man rapping at our screen door and singing hymns). Due to these findings, parapsychologists argue that perhaps the visual anomalies are inner projections of the emotions and unconscious fears of those who are still learning to harness their psychic and intuitive capabilities.

I remember my teen years like yesterday and though I am sensitive and intuitive, my slamming doors and screams were more teenage rebellion in nature. Stomping when I didn’t get my way, violently adjusting to menstrual cycles and coed dances, finding balance in volatile peer situations but nothing Poltergeist in nature. However, maybe for those experiencing Poltergeist phenomenon, their adolescent child’s emotions might rise to the surface or project in a less common way… in a more supernatural way. Paranormal occurrences are after all, not normal and of the minority.