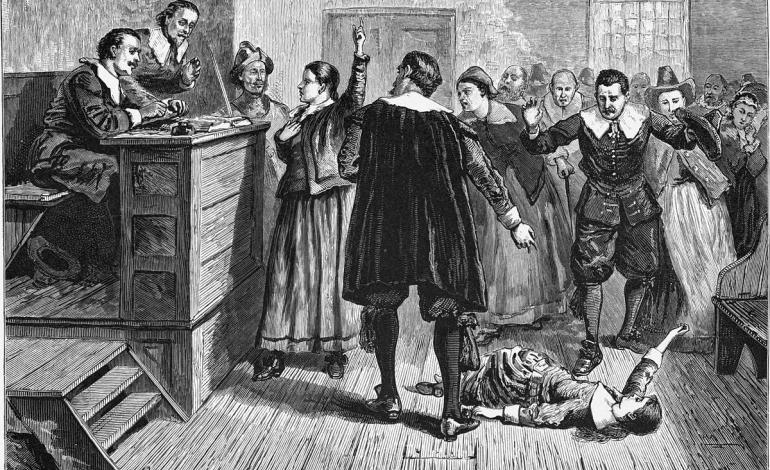 Salem is situated on the north coast of Massachusetts above Boston; it was one of the most significant seaports in “early American history “Today Salem is a very popular tourist destination, even more so during the months of September, and October time.

Street artists dressed up as various “Macabre characters pose as statues, all along the high street. Halloween merchandise can be seen on every corner as can a variety of “cos-players” who are dressed up as people from their favourite Halloween movie.

Artemisia Botanicals is a popular apothecary which I am told is filled to the brim with herbs, essential oils, handmade beauty products .As well as an enchanting tea room, which offers insight into your past present and future.

There were many different ways to tell if someone was a witch or not. If someone had a mole or a birthmark then that was considered to be the mark of the Devil. Witch finders even carried retractable blades so that they could puncture a supposed witch’s mark to see if anything out of the ordinary happened.

But this wasn’t enough to convince one of the better known judges of the time Cotton Mather, who insisted to the crowd that the Devil had allowed him to say the prayer. The man was hung shortly after.

If you had a cat or more than one pet you were considered a witch (I definitely would be then!) it was believed that witches had familiars (spiritual entities which took the shape of a black cat or other creature, and helped the witch do the Devils work)

If you were very knowledgeable about herbal remedies and the land.

If you talked to yourself, you would be accused of casting spells on people.

A famous story of the time

“February 1692, young Betty Parris began having “fits” that defied all explanation at the time. So did Abigail Williams and the girls’ friend Ann Putnam. Doctors and ministers watched in horror as the girls contorted themselves, cowered under chairs, and shouted nonsense.

With only rudimentary knowledge of biology, medicine, or psychology, the experts of the day concluded the girls must have been bewitched.

The girls were beaten and eventually began to point fingers at locals who had done no wrong, or who they simply did not like.”

But were there actually any real witches alive in the times of the Witch-hunts? According to resources there were apparently no real witches in Salem during the time of the trials. But this mass hysteria must have had some truth to it?

Could it be possible that at the time of the trials some Satanists were burned at the stake? Is it possible that there were indeed some real cases of actual witches during that time, but their stories have just got lost in time?

Today there are witches and warlocks everywhere, ironically allot inhabit Salem as well as other areas.

The World is a very different place to how it was in 1692. Witchcraft and such like have become accepted. People are not afraid to tell the World that they are into spiritualism or practice Witchcraft.

You realise that all the stories you heard as a child about Witches and Wizards are real, it may be different from what you expected but its real none the less.