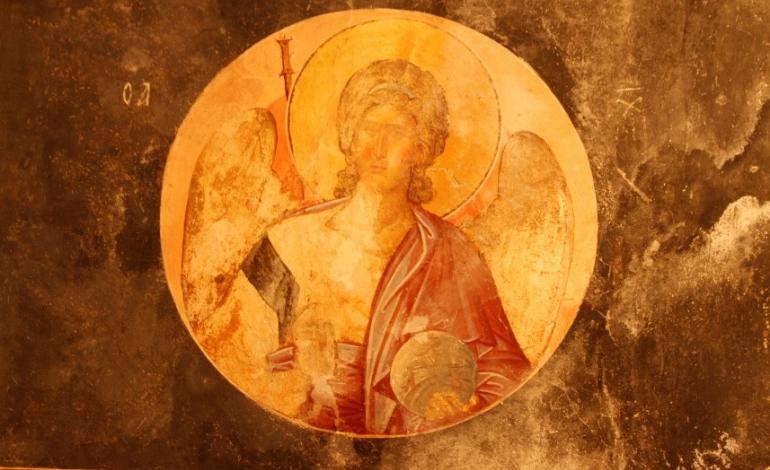 There are many different types of beings in the supernatural, including angels. Angels are acknowledged in most religions & are found in many sacred texts going back to antiquity. People have also been reporting encounters with angels since the beginning of time until the present day.

The most recognized & called upon angel in prayers & spiritual warfare is St. Michael the Archangel. However, many people in the paranormal don’t know much about St. Michael besides that Michael defeated & replaced Lucifer as Gods right hand after Lucifer & a third of the angels rebelled against God in heaven.

So we included some classic references & resources about St. Michael the Archangel that may shed some more light about this legendary servant of God.

St. Michael is one of the principal angels; his name was the war-cry of the good angels in the battle fought in heaven against the enemy and his followers. Four times his name is recorded in Scripture:

(1) Daniel 10:13 sqq., Gabriel says to Daniel, when he asks God to permit the Jews to return to Jerusalem: “The Angel [D.V. prince] of the kingdom of the Persians resisted me . . . and, behold Michael, one of the chief princes, came to help me . . . and none is my helper in all these things, but Michael your prince.”

(2) Daniel 12, the Angel speaking of the end of the world and the Antichrist says: “At that time shall Michael rise up, the great prince, who standeth for the children of thy people.”

(3) In the Catholic Epistle of St. Jude: “When Michael the Archangel, disputing with the devil, contended about the body of Moses”, etc. St. Jude alludes to an ancient Jewish tradition of a dispute between Michael and Satan over the body of Moses, an account of which is also found in the apocryphal book on the assumption of Moses (Origen, De Principiis III.2.2). St. Michael concealed the tomb of Moses; Satan, however, by disclosing it, tried to seduce the Jewish people to the sin of hero-worship. St. Michael also guards the body of Eve, according to the “Revelation of Moses” (“Apocryphal Gospels”, etc., ed. A. Walker, Edinburgh, p. 647).

(4) Apocalypse 12:7, “And there was a great battle in heaven, Michael and his angels fought with the dragon.” St. John speaks of the great conflict at the end of time, which reflects also the battle in heaven at the beginning of time. According to the Fathers there is often question of St. Michael in Scripture where his name is not mentioned. They say he was the cherub who stood at the gate of paradise, “to keep the way of the tree of life” (Genesis 3:24), the angel through whom God published the Decalogue to his chosen people, the angel who stood in the way against Balaam (Numbers 22:22 sqq.), the angel who routed the army of Sennacherib (2 Kings 19:35).

To fight against Satan. To rescue the souls of the faithful from the power of the enemy, especially at the hour of death. To be the champion of God’s people, the Jews in the Old Law, the Christians in the New Testament; therefore he was the patron of the Church and of the orders of knights during the middle Ages. To call away from earth and bring men’s souls to judgment (“signifer S. Michael repraesentet eas in lucam sanctam”, Offert. Miss Defunct. “Constituit eum principem super animas suscipiendas”, Antiph. off. Cf. The Shepherd of Hermas, Book III, Similitude 8, and Chapter 3). Regarding his rank in the celestial hierarchy opinions vary; St. Basil (Hom. de angelis) and other Greek Fathers, also Salmeron, Bellarmine, etc., place St. Michael over all the angels; they say he is called “archangel” because he is the prince of the other angels; others (cf. P. Bonaventura, op. cit.) believe that he is the prince of the seraphim, the first of the nine angelic orders. But, according to St. Thomas (Summa Ia.113.3) he is the prince of the last and lowest choir, the angels. The Roman Liturgy seems to follow the Greek Fathers; it calls him “Princeps militiae coelestis quem honorificant angelorum cives”. The hymn of the Mozarabic Breviary places St. Michael even above the Twenty-four Elders. The Greek Liturgy styles him Archistrategos, “highest general” (cf. Menaea, 8 Nov. and 6 Sept.). Veneration

It would have been natural to St. Michael, the champion of the Jewish people, to be the champion also of Christians, giving victory in war to his clients. The early Christians, however, regarded some of the martyrs as their military patrons: St. George, St. Theodore, St. Demetrius, St. Sergius, St. Procopius, St. Mercurius, etc.; but to St. Michael they gave the care of their sick. At the place where he was first venerated, in Phrygia, his prestige as angelic healer obscured his interposition in military affairs. It was from early times the centre of the true cult of the holy angels, particularly of St. Michael. Tradition relates that St. Michael in the earliest ages caused a medicinal spring to spout at Chairotopa near Colossae, where all the sick who bathed there, invoking the Blessed Trinity and St. Michael, were cured.

Still more famous are the springs which St. Michael is said to have drawn from the rock at Colossae (Chonae, the present Khonas, on the Lycus). The pagans directed a stream against the sanctuary of St. Michael to destroy it, but the archangel split the rock by lightning to give a new bed to the stream, and sanctified forever the waters which came from the gorge. The Greeks claim that this apparition took place about the middle of the first century and celebrate a feast in commemoration of it on 6 September (Analecta Bolland., VIII, 285-328). Also at Pythia in Bithynia and elsewhere in Asia the hot springs were dedicated to St. Michael.

At Constantinople likewise, St. Michael was the great heavenly physician. His principal sanctuary, the Michaelion, was at Sosthenion, some fifty miles south of Constantinople; there the archangel is said to have appeared to the Emperor Constantine. The sick slept in this church at night to wait for a manifestation of St. Michael; his feast was kept there 9 June. Another famous church was within the walls of the city, at the thermal baths of the Emperor Arcadius; there the synaxis of the archangel was celebrated 8 November. This feast spread over the entire Greek Church, and the Syrian, Armenian, and Coptic Churches adopted it also; it is now the principal feast of St. Michael in the Orient. It may have originated in Phrygia, but its station at Constantinople was the Thermae of Arcadius (Martinow, “Annus Graeco-slavicus”, and 8 Nov.). Other feasts of St. Michael at Constantinople were: 27 October, in the “Promotu” church; 18 June, in the Church of St. Julian at the Forum; and 10 December, at Athaea.

The Christians of Egypt placed their life-giving river, the Nile, under the protection of St. Michael; they adopted the Greek feast and kept it 12 November; on the twelfth of every month they celebrate a special commemoration of the archangel, but 12 June, when the river commences to rise, they keep as a holiday of obligation the feast of St. Michael “for the rising of the Nile”, euche eis ten symmetron anabasin ton potamion hydaton.

At Rome the Leonine Sacramentary (sixth century) has the “Natale Basilicae Angeli via Salaria”, 30 September; of the five Masses for the feast three mention St. Michael. The Gelasian Sacramentary (seventh century) gives the feast “S. Michaelis Archangeli”, and the Gregorian Sacramentary (eighth century), “Dedicatio Basilionis S. Angeli Michaelis”, 29 Sept. A manuscript also here adds “via Salaria” (Ebner, “Miss. Rom. Iter Italicum”, 127). This church of the Via Salaria was six miles to the north of the city; in the ninth century it was called Basilica Archangeli in Septimo (Armellini, “Chiese di Roma”, p. 85). It disappeared a thousand years ago. At Rome also the part of heavenly physician was given to St. Michael. According to an (apocryphal?) legend of the tenth century he appeared over the Moles Hadriani (Castel di S. Angelo), in 950, during the procession which St. Gregory held against the pestilence, putting an end to the plague. Boniface IV (608-15) built on the Moles Hadriani in honour of him, a church, which was styled St. Michaelis inter nubes (in summitate circi).

Well known is the apparition of St. Michael (a. 494 or 530-40), as related in the Roman Breviary, 8 May, at his renowned sanctuary on Monte Gargano, where his original glory as patron in war was restored to him. To his intercession the Lombard’s of Sipontum (Manfredonia) attributed their victory over the Greek Neapolitans, 8 May, 663. In commemoration of this victory the church of Sipontum instituted a special feast in honour of the archangel, on 8 May, which has spread over the entire Latin Church and is now called (since the time of Pius V) “Apparitio S. Michaelis”, although it originally did not commemorate the apparition, but the victory.

In Normandy St. Michael is the patron of mariners in his famous sanctuary at Mont-Saint-Michel in the Diocese of Coutances. He is said to have appeared there, in 708, to St. Aubert, Bishop of Avranches. In Normandy his feast “S. Michaelis in periculo maris” or “in Monte Tumba” was universally celebrated on 18 Oct., the anniversary of the dedication of the first church, 16 Oct., 710; the feast is now confined to the Diocese of Coutances. In Germany, after its evangelization, St. Michael replaced for the Christians the pagan god Wotan, to whom many mountains were sacred, hence the numerous mountain chapels of St. Michael all over Germany.

The hymns of the Roman Office are said to have been composed by St. Rabanus Maurus of Fulda (d. 856). In art St. Michael is represented as an angelic warrior, fully armed with helmet, sword, and shield (often the shield bears the Latin inscription: Quis ut Deus), standing over the dragon, whom he sometimes pierces with a lance. He also holds a pair of scales in which he weighs the souls of the departed (cf. Rock, “The Church of Our Fathers”, III, 160), or the book of life, to show that he takes part in the judgment. His feast (29 September) in the Middle Ages was celebrated as a holy day of obligation, but along with several other feasts it was gradually abolished since the eighteenth century (see FEASTS). Michaelmas Day, in England and other countries, is one of the regular quarter-days for settling rents and accounts; but it is no longer remarkable for the hospitality with which it was formerly celebrated. Stubble-geese being esteemed in perfection about this time, most families had one dressed on Michaelmas Day. In some parishes (Isle of Skye) they had a procession on this day and baked a cake, called St. Michael’s bannock.

Here’s the prayer to St. Michael;

St. Michael the Archangel defends us in battle. Be our protection against the wickedness & snares of the devil. May God rebuke him, we humbly pray. & too though, o prince of the heavenly host. By the power of God thrust into hell Satan & all the evil spirits who roam about the world seeking the ruin of souls. Amen.