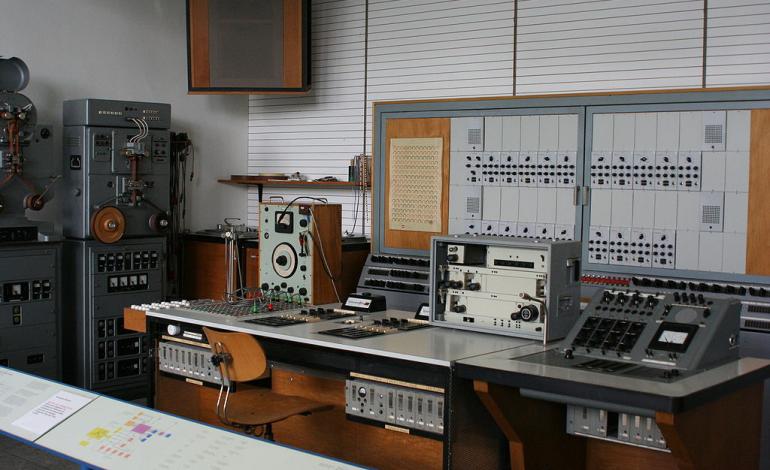 Have you ever watched one of those ghost hunting shows where an English speaking investigator conducts an investigation in a seven hundred year old Latvian castle? Me too, but something odd happens that might make someone think that the investigators are engaging in shenanigans of the worst kind, faking evidence.

You watch as your favourite ghost hunter begins an EVP, asking a series of questions in perfect English. The next day, upon evidence review, they discover that they indeed did get answers to their questions but wait, something even odder than some dead 700 year old Latvian count answering occurs. Rather than answering those questions in his native tongue they hear the answers in perfect English. What the hell?

If you’re anything like me, and chances are you are, you may question how this is possible. How does a dead guy from the 14th century answer questions in a language he would not be familiar with? A completely reasonable question. Could fakery be afoot?

EVP or electronic voice phenomena, is quite possibly one of the most controversial subjects in the history of ghost hunting. The above mentioned scenario being enough to make anyone think that something stinks and it’s not just a dead Latvian speaking English. Other question abound. Questions that deserve an answer.

So what are these questions? Well, how does something that lacks the necessary hardware speak? How does a dead person not familiar with English answer EVP questions in English? And dear god, what is with that insufferable whisper? These are all very reasonable questions but before you fly into a rage of cynical scepticism, assuming such a thing exists, you may want to consider that theories exist to make an attempt at answering these questions. However, I warn you, these theories are just that theories and not hard answers. Because, well, when it comes to matters of dealing with the dead, theories are all we got.

Tell me if you’ve ever experienced this. In your ghost hunting group the job of listening to audio footage falls to you. It’s your duty to analyse and categorize all the EVP that were collected on your team’s most recent investigation. While listening you find yourself becoming frustrated with a number of EVPs. You know something is there but it comes across as a barely audible whisper. I understand your frustration but there may be a reason that most EVPs come across as a whisper. Allow me to explain using a real world analogy.

Imagine this scenario if you can. You and a buddy are visiting the world’s biggest hole in the ground, otherwise known as the Grand Canyon. For whatever reason you and your pal get separated. One of you is on one side while your friend is at the other side. And if you’ve ever been there you know that’s a considerable distance.

You can see each other but hearing each other is another issue all together. You cup your hands around your mouth and yell,” Hey man, let’s get a beer.” Your friend, way on the other side strains to hear you but what he hears is something entirely different, “Let’s punch a deer.” What the…? You’re thirsty for a cold one but your pal believes that the heat of the Arizona desert has inexplicably made you a danger to Bambi. Believe it or not capturing the voice of a spirit works on the same property.

Although a spirit may be in the room with you they are not in the same dimension as you. Weird, I get that, but this is a theory. Like the above scenario of good old boy 1 and good old 2 at the Grand Canyon, separating you and the spirit is a great chasm of conciseness. You are on the living side of the veil while the spirit is on the breathing impaired or dead side. When you consider this, the chasm is even greater than the Grand Canyon. The spirit might be screaming their answer into your voice recorder but all you get is a barely audible whisper. The chasm causes this audio disparity.

This is one of my favourite theories about EVPs. But not all EVPs come across as a whisper, some are clear as crystal and sound as if they’re right in the room with you. Explain that chasm boy. It’s possible, and this is just a theory, but perhaps the chasm or veil is thinner in some places than others. Or the spirit is able to manipulate energy a bit better and has discovered a way to make them be heard well. Either way it’s just miraculous that something that lacks the necessary hardware, lungs and vocal folds is even able to communicate at all. Inevitably leading us into our next EVP theory.

The ability to vocalize our thoughts and feelings are one of the things that separate man from the animals. Speech is produced with pulmonary pressure provided by the lungs which creates phonation in the glottis that is then modified by the vocal tract. This hardware is necessary to make communication possible. So I ask this, how is it possible that an entity that lacks all these components is capable of leaving a message on our recording equipment?

When it comes to the science of electronic voice phenomena, it is this issue that causes the most amount of scepticism. And rightly so, because biologically speaking, it should be absolutely impossible for a spirit to speak. But as with anything else pertaining to the strange and unusual, we got a theory for that.

When I started incorporating EVP in my own research and investigations I noticed something strange. It seemed that an overwhelming amount of EVPs occurred either just after an investigator spoke or came in just under the investigator’s voice. A sceptic upon hearing this might think that’s undeniable proof that the alleged spirit voice is being faked. Now, I can understand that and such a concern would be considered perfectly reasonable in light of the fact that people, ‘make stuff up.’ But allow me to offer another explanation, telepathy.

Telepathy is basically the psychic ability of mind to mind contact. It is how psychics and intuitive are able to perform readings on the living and make contact with the dead. It is a psychic ability that I have seen used time and time again and believe in completely. And it may just be what spirits use to communicate.

As I mentioned above this is merely a theory based on many years of observation. If there is any truth to all of this, what makes any of this possible? In metaphysics, occult theory and ancient philosophy there is a mechanism that not only ties all this together under a nice tight little red bow but ties consciousness together as we know it. Universal Mind Theory, the ultimate explanation for what makes EVP possible.

The Universal Mind Is A Terrible Thing To Waste.

Now we get on to the part of EVP theory that has caused so much controversy not just among sceptics, but believers as well, the language barrier. To many, it is inconceivable that a spirit from another land that would be unfamiliar with the English language would be able to answer questions posed to it in English. This is an issue that really had me thinking that some ghost shows might be completely BS. That was of course until I discovered the Universal Mind Theory.

In 480 BCE, Pre-Socratic philosopher and noted party animal, Anaxagoras, was the first person to suggest that all that is in existence was created by this all seeing and all-knowing Universal Mind. According to Anaxagoras, this Universal mind not only held the cosmos together but was also a celestial library, of sorts, that held all the knowledge of every that lived, past, present and future. And all creatures, upon death, had the ability to access this mind, learn from it and eventually become one with it. With the Universal Mind there is no limitation or barriers including a language barrier?

Many centuries later, in the 1800s, German philosopher, Georg Wilhelm Friedrich Hegel released his bestselling work of philosophy The Phenomenology of Spirit. Phenomenology was Hegel’s thoughts and theories on the evolution of human consciousness from sense perception to gaining absolute knowledge. Hegel mirrored Anaxagoras, with his belief that upon death we all returned to this great hive mind of absolute knowledge and becoming one with it. It was Hegel who coined the term the Universal Mind.

Like his ancient Greek predecessor, Hegel believed that in the Universal Mind, a pesky little thing like a language barrier could be overcome. Spirits could easily access this knowledge and speak any language they saw fit. No limitations on anything.