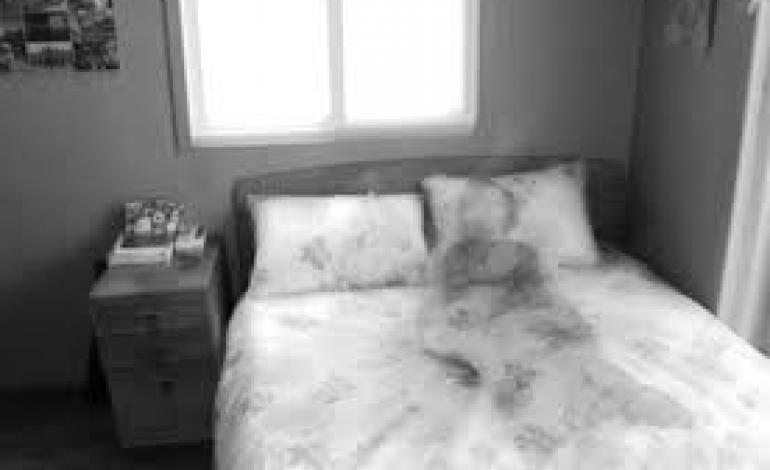 I’m taking another case from our files of our society; this case comes from the town of Sauchie in Clackmannanshire Central Scotland and occurred back in 1987. Fellow researcher Ron Halliday and I began our research into claims that three houses joined together in Gartmorn Road Sauchie, a town near Alloa were haunted. Early research showed that these houses which were built around 1937 were, for the past six months, were subject to strange footsteps, noises, bangs, smells, and all the usual phenomenon associated with haunted buildings. Many of these noises it must be said were reported to have come from the loft. Interviews were conducted on audio tape with Cindy Hope (pseudonym) where she told me that ever since she had first moved into the property she just didn’t feel at home, that there was something not quite right about it. Cindy’s first experience was that of standing on a certain stair on the staircase in which she experienced strange sensations, dizziness being the main one. Cindy’s 18 year old daughter Laura (pseudonym) had to sleep with the light on owing to constant bad dreams. Cindy’s next door neighbour Mrs Elaine Peters also related much of the same events only these events were happening to her in her own home! Again with most of the noises coming from the loft area.

SPI consulted Tony Cornell of Cambridge University, and Professor Archie Roy of Glasgow University asking them if they could offer any form of assistance, unfortunately they were both too tied up with other commitments to be able to offer any help. SPI also contacted other Scottish researchers but again with little effect. So, it looked like we were on our own with this one. And so our society, Strange Phenomena Investigations, SPI began one of our most intriguing cases that we would talk about for a very long time.

When our Investigative team appeared on the scene we found much to our surprise that the two families who lived at either side of Cindy’s house, had had enough of the ghostly events that were happening in their house, they abandoned their houses and joined up with Cindy who lived in the middle house of the three. And when we walked into Cindy’s house, well it was like a battle zone. There were camp beds and air beds everywhere in the living room where the two guest families had come to stay (strength in numbers as they say) Apparently what had capped it all off was when Cindy’s neighbours had come round to visit and they were all sitting in the living room discussing all the weird events when all of a sudden the sound of ‘thumping’ coming from upstairs, probably from the loft again they surmised. That was it, enough was enough, sick to the back teeth of these disturbances, they decided to face their fears and they all got up out of their chairs and angrily headed out into the hall area and looked up the stairs. Their fears were doubly enhanced for when they all looked up the empty stairs they all clearly heard the unmistakable sound of heavy footsteps coming towards them, and nobody, absolutely nobody, was there. Needless to say, they broke all speed records as they quickly took to their heels jamming themselves in a door as they all tried to get out there at the same time. That was the last straw Cindy said, that’s when her next door neighbours on both sides joined forces with them. Since our last communications with the family, stranger events had occurred, the following is a combination of them.

(1) Cold spots would suddenly appear in various parts of the house even in summer.

(2) Many strange noises came from the loft.

(3) A kitchen drawer opened by itself and a knife and fork sailed through mid air without anyone touching them and then they both fell to the floor, thankfully without injuring anyone.

(4) The family dog (of the Hope family) refused to go upstairs, and anytime anyone tried to lead it upstairs it would bite the hand off you. One day it was found in an ‘upstairs’ bedroom locked in (from the inside!!!!) The dog had tried to claw its way through the door and had bloodied its paws in the attempt. The bedroom door was full of scratches.

(5) A doppelganger of one of the woman was scene to walk down the stairs but that particular lady was not in the house at that time. (More of that one in a moment)

(6) During one point in our Investigation as we were interviewing one of the ladies, she went into a trance and started speaking in a different language which no one had heard before. I was sitting right in front of this lady and I can tell you, this was pretty scary.

Mrs Peter’s 11 year old son Dane claimed that he was being visited in the night by a strange man and woman, the woman was carrying a small baby in her arms. Both people he said, looked real and solid. On one occasion the ghostly woman snatched the pillow beneath the head of young Dane and placed it at the bottom of the bed! Not only that, this woman continually asked young Dane what his name was and also asked him not to be frightened of them. She went on to say that they didn’t like the dog next door and it was her that locked the dog in the room so that it wouldn’t bite us or the baby. (Ghosts being frightened of earthly dogs, whatever next?) We ascertained that young Dane was ‘NOT’ aware that the dog was found locked inside the bedroom.

When I happened to mention to Dane’s mother about her son’s visitors in the night, the man and woman holding the baby, she blurted out, “That would explain it I’ve had strange dreams of a man and woman with a baby”. Elaine Peters, the next door neighbour later explained that she has lost two babies in childbirth. On a later date, young Dane said to us that he was still seeing the strange man and woman appear in his bedroom and this time they had said to him that they were only ‘looking after the baby’ until the owners stopped being mad at it? Dane said that the woman kept trying to insert a strange looking dummy tit into the baby’s mouth as she turned round and headed towards his mum’s room. Was this all fantasy in the mind of a young boy who must surely have been aware of what his family and friends had been speaking about for days? Well that’s a possibility that we have to consider, but then again, what if it ‘is true’. Just because something sounds ridiculous does not necessarily mean that it is so.

Now with any haunted house we have to be very careful, careful in the sense that it might not be haunted at all? That it all might be either one big joke for ego publicity, or, more realistically, it may be that the occupants want to get out of the house in order to get a better house, (believe you me some people will try anything in order to get better housing, although admittedly, we as a research team, have never come across this before.) But as with any case, we still had to ascertain for sure, whether or not this was a genuine haunting or just some people out to pull the wool over our eyes. We needn’t have worried on that point, as later events would clearly show us that this case was the ‘real deal’. As the investigation continued we also found out from Cindy that one day as she walked into the kitchen, she heard a distinct ‘swishing’ sound come from above the kitchen table, a sound that she couldn’t account for It wasn’t long before electrical items were switching themselves on and off, televisions, radios. Elaine explained to the author that one of the most unnerving episodes that she herself witnessed was the day when she saw the reflection of a man’s face in the stacking stereo system. This wasn’t a reflection from the TV as it wasn’t switched on at the time nor was it a reflection of anyone else in the room for there was only her and her small son in the room at the time. She did not recognise this face at all. Marie Hope (Cindy’s daughter) stated to our society that on one occasion when her boyfriend paid a visit, he claimed to have heard Marie’s voice calling him to come upstairs (he had only just come into the house) whereupon he did so but upon entering Marie’s bedroom she wasn’t there, he found her fast asleep downstairs on the living room settee. Further to this, along the same lines, Cindy herself heard her 21 year old son Timmy calling out to her, but Timmy wasn’t home. This ‘mimicking’ of voices is not that uncommon in hauntings and is reported quite often. It would appear that spirits get quite a kick of pretending to be someone they are not!

In part two of this case we’ll learn more of the disturbing and terrifying events that occurred in these houses.