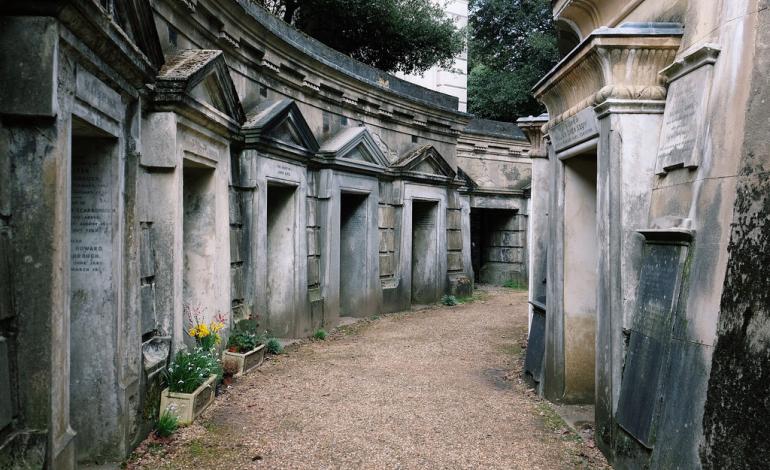 In 1969 the British Psychic and Occult Society began to receive many reports of a very tall, black apparition, seen lurking around the gravestones in LondonŌĆÖs Highgate Cemetary. Many of these reports, upon further investigation, turned out to be stories or gossip but eventually an eye witness was found. The man wished to keep his identity secret, but he claimed that he has been hypnotised by ŌĆśsomethingŌĆÖ in the cemetery after he had gone there, late one afternoon.

As it began to get dark he decided to leave, but somehow, he managed to become lost. Not believing in the existence of ghosts, he walked calmly around looking for the gate when he suddenly became aware of a presence behind him. He turned around and less than six feet away, he saw a tall dark spectre hovering just above the ground. He found himself transfixed to the spot completely unable to move and felt drained of energy by some powerful ‘hypnotic force’ that in a matter of seconds rendered him unconscious to any sense of time or his surroundings. He remained like this for several minutes (or what seemed like several minutes) before the spectre abruptly vanished and he slowly regained his normal faculties.

Recalling the incident afterwards, the man said that it was almost as if some force of evil had actually sought him out with the intention of doing serious harm.

This man was an upstanding member of the community and known to be quite logical (he was an accountant by trade). What intruiged investigators was that seeing a ŌĆśghostŌĆÖ is normally a passive experience ŌĆō you see the ghost and thatŌĆÖs that. This man (who is referred to as Thornton) was saying that he felt it had sought him out and actually meant to do him harm.

Another witness was an old lady who claimed she had been frightened by a ‘tall dark man’ who floated at her from within the cemetery gates. She had been walking her dog late one night but as she approached the gates of the cemetery, it started to howl and tried to retreat. She looked up and saw a figure with ‘glaring eyes’ staring at her. In a matter of seconds, it promptly vanished.

The British Psychic and Occult Society investigated and it seemed that Highgate had been the location of many sightings in previous Indeed, similar tales dated back to the Victorian era and, interestingly enough, many of them had ‘vampiristic’ connotations.

Perhaps the reason for this was that Stoker himself had possibly been influenced by the existence of ‘something’ in Highgate Cemetery. When he wrote his unique book Dracula, he makes direct reference to Highgate Cemetery (or at least, an area in the close proximity of Highgate Cemetery) as being the last resting place of one of Count Dracula’s disciples.

Although Stoker may have also been influenced by the eerie case of Elizabeth Siddal who died in 1855 and who was buried in Highgate Cemetery. In 1862, her body was exhumed by a distraught relative anxious to retrieve some poems said to have been buried with her. A witness present, Charles Augustus Howell, described the ‘awesome sight’ of the undecayed body with ‘luxuriant red-gold hair’ that ‘practically filled the coffin’ - the implication being that Elizabeth was ‘Undead’, or in a state of catalepsy.

One of the common tales of that time also told of a ‘tall man dressed in black’ who used to disappear mysteriously through the cemetery wall. It was especially interesting to note the similarity between the Victorian sightings and the present day manifestations - especially as there was approximately 100 years difference between the two. If nothing else, this provided proof that the cemetery had been reputedly haunted for some time.

Two local amateur ghost-hunters/psychic investigators ŌĆō David Farrant and Se├Īn Manchester ŌĆō separately studied the sightings, with Manchester claiming that the graveyard was haunted by a Dracula-like vampire. After this events, fuelled by media interest, got out of hand, with the cemetery overrun on the evening of Friday 13th March 1970 by a mob of quote/unquote ŌĆśvampire huntersŌĆÖ. Several months later on 1st August (Lammas Day) the charred and headless remains of a womanŌĆÖs body were found near the catacombs Manchester believed housed the coffin of ŌĆ£a King Vampire of the Undead.ŌĆØ (These are the words reported by the local Hampstead & Highgate Express newspaper although Manchester denies using this phrase.)

For reasons now no longer clear, a feud blew up between Farrant and Manchester. Manchester went on to write a number of books about the incident, including The Vampire HunterŌĆÖs Handbook, and is now a bishop of the British Old Catholic Church (as distinct from the mainstream Roman Catholic Church). Farrant is also still active and has written extensively about the subject however in 1974 he was jailed for damaging memorials and interfering with the remains of the dead in Highgate Cemetery. Farrant claims he was framed and that the desecration was caused by unknown Satanists. Manchester, incidentally, also blamed Satanists for reawakening the vampire at the heart of this story.

And that is it. There undoubtedly were people practising Black Magic in Highgate Cemetery in the late 1960s and early 70s and they certainly desecrated some of the coffing. However since then the cemetery has been extensively renovated and brought back into a more manageable state, reducing the case of the Highgate Vampire to an interesting historical footnote from 40 years ago.