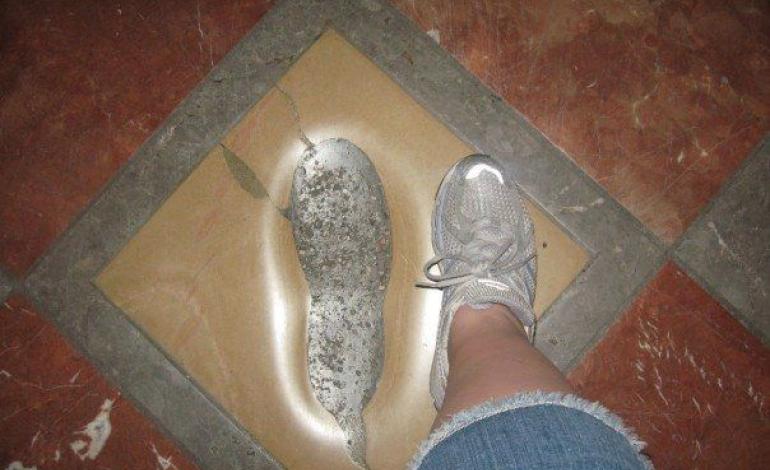 Part of our existence as a society is the fact that we are surrounded by legends and lore. They have become an essential part of our survival as well. Whether they were based on truth, or used as a device to get us to behave as children, legends have become an integral part of our society. Interestingly enough, many of these legends and stories of folklore have great similarities around the world. What makes this even more fascinating is that these legends date back during times where these cultures would not have interacted with each other. Could this mean that there is perhaps some validity in these legends? Or does it mean that we as human all following a similar pattern that creates our human nature?

The Introduction & History of a Legend

One such legend that seems to have found sustainability is the legend of the Devil’s Footprint. I first became aware of the legend in 2007 while I was traveling around Europe. My group made a stop in the Bavarian city of Munich, Germany. Munich was towards the end of my adventures, and a member of my group insisted on visiting the Frauenkirche.

A little history on the Frauenkirche; it started construction in 1468, which replaced an older church that was built on the same spot in the 12th century. The builders ran out of money in 1479 and Pope Sixtus IV granted an indulgence so construction could continue. The two towers finished construction in 1488. The grounds were consecrated in 1494, and the infamous domes of the church were added in 1524. When you enter the church, only one window is visible from the entrance, while there are windows running along both sides. The church is massive, and can hold up 20,000 people.

Apart From the Rest

Despite the mass size of the church, it really all started to look the same to me, especially after traveling Europe for several months and seeing dozens of churches. But the legend caught my attention enough to where I wanted to see it in person. The people of Munch call this the legend of the Teufelstritt, or better known as the Devil’s Footstep in English. While the legend is dated, it certainly remains relevant today in Germany among the Catholic population.

The legend I originally heard in Munich was that the Devil made a deal with the builders so that the construction of the church could be financed after they ran out of money in 1479. The catch was that the church was to have no windows so that the Devil could wander in as he pleased. However, the builders tricked the Devil by building windows that couldn’t be seen from the foyer. When the Devil realized that he had been tricked, he stomped on the ground furiously, leaving a black mark on the floor that still remains today.

There are a few other legends surrounding the Devil’s footprint at the Frauenkirche, such as a similar story where the single window was originally hidden by an altar, so the Devil stood in the foyer making fun of the interior while stomping his foot.

Another trait of the Frauenkirche is that there is a breeze inside. Of course, there are legends surrounding this as well that are linked to the Devil. When the Devil came to check on the construction of the church, he came in riding on the wind. However, after his temper tantrum, he stormed off leaving the wind behind. Until the Devil comes to claim it, the breeze will continue inside the church. The alternate version of this is that the Devil was so angry that he manifested the wind on his own. Legends always make a famous location more interesting, especially when you include the Devil. When I was at the Frauenkirche, I didn’t feel like there was anything evil. If anything, I was more amused at the fact that “the Devil” and I shared a similar shoe size, as depicted in the picture. Usually, there is a little fairytale in truth, and in fairytale there is a little truth.

The Frauenkirche was nearly destroyed from attacks during World War II. What is interesting is that despite the interior being almost decimated, the Devil’s Footstep survived the attacks. Not even a dent or a scratch on the footprint despite the falling stone and pillars. Could there be something more to this legend than what we assume? Tof his isn’t the first time that we have heard of religious relics being preserved in the midst of destruction.

But also, at the same time, if there was any validity to the legend, why would the church preserve the Devil’s footstep? This could have been a tool to drive membership to the church, showing that the power of God will always trump evil. Clearly, the footprint proved that the Devil couldn’t enter the house of the Lord and that man, with God’s help, can easily fool and sway the Devil. What is important to consider with any legend, whether it is about religion or it is a ghost story, is to keep in mind the context of the stories. What was occurring during the time that the legend was born? What was going on in society? What did the legend do to change society and why is it important? By answering these questions, you can help solve the validity of the legend and assess the amount of truth that is implemented.

A similar story of the Devil leaving his mark dates back to 1840 from an article published in The Times about a strange phenomenon in Scotland. After snow had fallen, the areas of Glenorchy, Glenlyon and Glenochay saw a strange phenomenon where footprints were visible, but the animal couldn’t be identified. Clergy and church members blamed the phenomenon on the Devil, likely as a ploy to get people to attend church. About 15 years later in the Exe Estuary in England, a great snowstorm had plummeted the area. The next morning, mysterious hoof-like prints appeared in the snow that covered between 40 and 100 miles. The tracks went through walls, bales of hay, and seemingly impossible areas. Once again, the church blamed the Devil and stated that he was looking for sinners to take away.

Legends Today versus Legends Past

If there is a guarantee that we all share, it is that we are afraid of the unknown and the unexplainable. If there is a phenomenon connected with the Devil occurring somewhere, trust that there will be people out there to take advantage of the opportunity to scare people out of their wits. Today, we would call that entertainment.

In truth, legends have now evolved into a form of entertainment. With the innovations and breakthroughs of science, we can better debunk mysterious phenomenon. Thanks to the internet, encounters can be both broadcasted and destroyed by someone with a logical explanation. Because of this, modern legends don’t have the immortality that legends of the past have. The legends from the past, especially before technology came into play, didn’t have the resources to debunk them. Therefore, the stories were believed and passed down from generation to generation, beginning the cycle where legends become immortal.