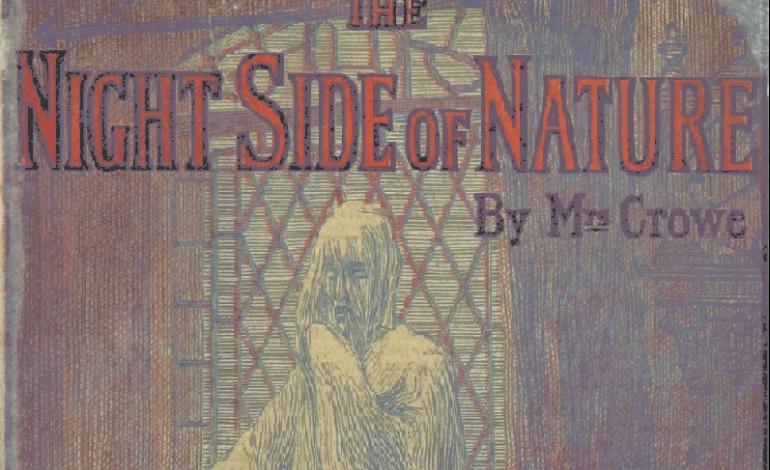 The Society for Psychical Research is considered by many to be the corner stone of the modern day scientific approach to attempting to understanding supernatural forces. Founded on 6th January 1882 by a group of academics and scientists including Alfred Russell Wallace, the co founder of the theory of evolution, the society set out to document the “study of abnormal happenings’.

You’d be forgiven for assuming that the field of scientific paranormal research came about as the result of the after dinner musings of several well respected gentlemen while sipping port and smoking cigars, and I’m sure to some degree that is the case. But if you dig a little deeper, you will make a surprising discovery.

If we were to travel back in time to 1848 we would find ourselves presented with a ground breaking book entitled ‘The Night side of Nature’, which was a competent investigation into the supernatural based on historical evidence and a series of eyewitness accounts from across Great Britain. The writer was one Miss Catherine Crowe, who later went on to write several more paranormal publications, but it was this, her first non fiction work on this subject, that remains her most successful.

Catherine Crowe was born in 1803 and was painstaking in her analysis and research methods, bringing an element of the scientific and measurable to the ghostly tales that were fascinating Victorian society. She worked diligently to separate the facts from the exaggerated imaginations and gossip that embellished many ghost stories. In the books introduction she makes a direct appeal to the academic community urging them to take notice of some of the more credible reports, highlighting that they deserved proper scientific investigation.

“I avow that in writing this book I have a higher aim than merely to afford amusement. I wish to engage the attention of my readers, as I am satisfied that the opinions I am about to advocate, seriously entertained, would produce very beneficial results…If I could only induce a few capable persons, instead of laughing at these things, to look at them, my object would be attained and I should consider my time well spent”.

Quite a trail blazer was she, and a feisty one at that. It is easy to see from this paragraph alone, why those who are aware of Catherine Crowe see her as an influential driving force behind the creation of the SPR 40 years later. Sadly, she didn’t live to see her brainchild birthed, dying in 1876, although if her beliefs were correct, I have no doubt that Miss Crowe has gained much satisfaction in the afterlife over the past century as more and more of us are looking to scientific methods to explain supernatural phenomena.

The society however would not see its birth take place completely devoid of the feminine touch. One of the founder members Professor Henry Sidgwick insisted that his wife, a feminist and gifted mathematician named Elenor, join the team as administrator. A very forward thinking move for an academic at the time.

Elenor Sidgwick played a vital role in the groups activities. She took part in the investigation of several hauntings, developed many experiments, sat in on séances with various mediums and generally used her energy and clarity of thought to document the enquiries for the SPR’s files and edit the society’s ‘Journal’. Modestly, she refused to include her name on most of their work preferring to allow credit to go to the society as a whole. In 1920 Elenor published the following conclusion:

“I can only say that, having made every effort to exercise reasonable skepticism, I yet do not feel equal to the degree of unbelief in human testimony to avoid at least provisionally reaching the conclusion that there are, in a sense, haunted houses”.

Maybe today she would simply say “I am yet to be convinced that ghosts DO NOT exist”. An opinion I share whole-heartedly.

Much that has followed in the way of “ghost hunting’ can be traced back to the work of Elenor Sidgwick, and the prompting of Catherine Crowe.

It’s possible that many of you reading this will never have heard of either of these researchers, but researchers they were. They will have spent many an hour in darkness, listening for things that go bump in the night and developing ways to record and analyse their experiences. So why are they little spoken of? Is it because they are women? Surely not. But interestingly when looking for historical information relating to paranormal investigation, it is incredibly difficult to find any mention of female specialists. A recent article published on Listverse.com tells of “10 notable Paranormal Researchers from history”.

Now, I wouldn’t describe myself as a Feminist. I believe in equality and the benefits of keeping the scales balanced as much as possible. Nor do I disagree with the inclusion of these 10 fine fellows to this list (well maybe 1 or 2!) However it’s pretty difficult to ignore the glaring omission of women historically. Maybe it echoes the general feeling towards women 150 years ago. Seen and not heard. Were these female pioneers more comfortable in the shadows?

Maybe behind every good man, there is indeed a good (or even better) woman.