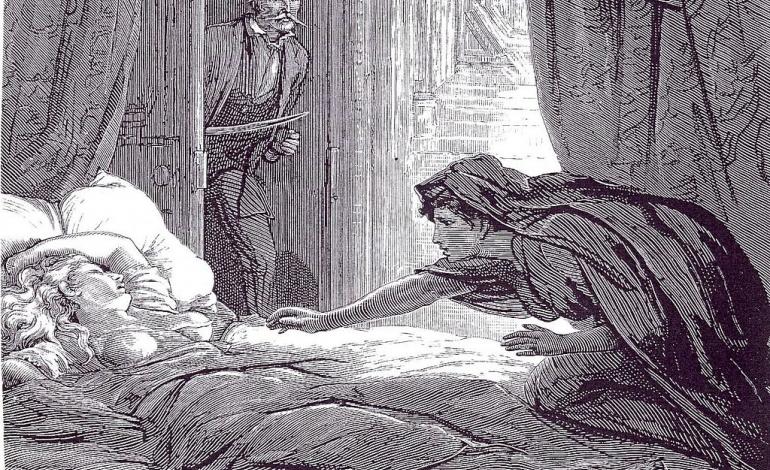 During the seventh lunar month of the Chinese calendar, the Chinese believe that the veil between the realm of the living and the realm of the underworld is wide open allowing the dead to roam the Earth. The fear of the dead is so great in China that a festival was instituted to appease the spectral revenants.

During the Festival of the Hungry Ghost, mortals set out food, drink and treasure to placate the dreaded citizens of the Underworld. But there is one creature of the night the Chinese fear the most. A reanimated corpse that is said to feed in the Qi of the living. The vampiric Jiangshi.

During the early days of the Qing Dynasty, two warriors, Po and Ching, were returning from war. As they walked the road that would eventually lead them home, Po and Ching noticed that the sun was setting and they needed to find a place to rest and a bite to eat.

As Po and Ching, hurried their pace they came to an Inn along the road. After a hardy meal Po inquired of the Inn keeper if he had any rooms available. The innkeeper told the two warriors that he did but there was a minor problem. Two days earlier his young daughter was tragically killed in an accident and her body was in state in the only available room. Po and Ching, being proud warriors and unafraid of a dead body took the room and bedded down for the night.

As the night wore on, Po was awakened by a need to use the bathroom and left his companion in the room with the dead girl.

When Po was done relieving himself he returned to his room and was greeted by a horrendous sight. He watched as the dead girl glowing, an intense green sat on the chest of his companion sucking Ching’s Qi through his nose. When his anger overcame his fear, Po shouted, “Jiangshi, come and get me.” The Jiangshi looked up from her victim, let out a shrill screech and chased Po out of the Inn.

As Po ran out of the inn with the monster close behind, it’s talon like nails extended for the kill. Po came to an abrupt stop in front of a tree. The Jiangshi let out another screech and lunged for the warrior. Po quickly ducked and the creature’s nails sank into the tree. Seeing the Jiangshi was trapped Po unsheathed his sword and beheaded the once beautiful girl.

The next morning the innkeeper discovered the dead body of Ching in the room dead. When he ran out of the inn he found Po holding the head of his grotesquely changed daughter and her body slumped next to the tree. Po survived an encounter with a vampire.

This story is but one of many stories relating to the restless dead of Chinese folklore. And oddly enough, the Jiangshi is the closest thing there is to the western idea of the vampire, a reanimated corpse that feeds on the living to prolong its damned existence.