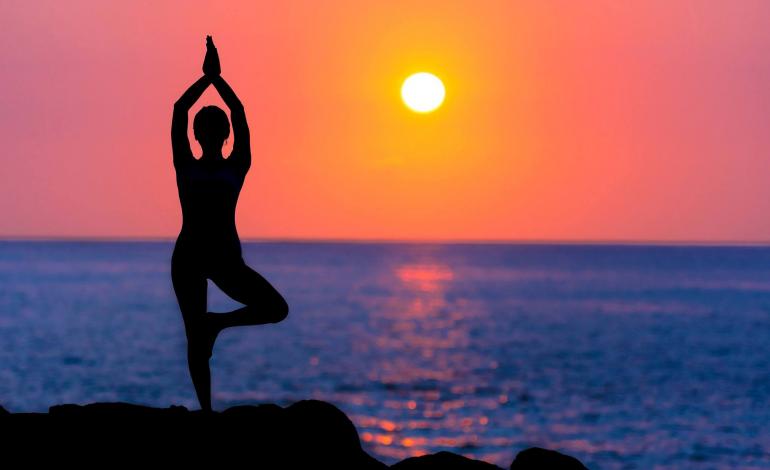 Here is a question which comes up from time to time, especially in Christianity. Does Yoga open doorways to the devil? Will one go to hell for doing stretching exercises? Well, those are actually two different questions and two different things, yet similar as well. Let’s take a look…

There are two definitions found in the Merrian-Webster dictionary for Yoga. They are as follows:

1.) Yoga - capitalized: a Hindu theistic philosophy teaching the suppression of all activity of body, mind, and will in order that the self may realize its distinction from them and attain liberation.

The first definition seems to represent the older Hindu practices and is capitalized. The second represents the newer western practices and curiously is not capitalized. This is a distinction we are noting here. And when the latter definition’s spelling is starting a sentence, then it becomes capitalized for phonical reasons, which can also technically inadvertently change the meaning by definition. But most folks aren’t even aware that there are actually two different versions for Yoga/yoga listed in the dictionary under the same word.

So let’s look at the distinctions here in relation to the questions. There are very old forms of Yoga (Hindu) that are utilized in diety worship and are at the roots of yoga’s traditional spiritual origins. They also involve suppressing the will, which can be a dangerous thing when dealing with other entities (especially deities). However, that doesn’t mean that all forms of yoga out there are about or involve deity worship or suppression of will. The second definition even seems clear on this.

The two easily get confused at times. So let’s be precise. It takes more than a physical pose to open a doorway to the devil. That is basic common sense. Thus intent needs to be applied. Without the intent of deity contact or worship, there should be no greater threat of connection than jogging, stretching, or weight lifting for example.

Any “yoga” without any spiritual intent really shouldn’t be defined as true Yoga, yet it is. The big difference? We are talking about deity contact (with poses as a ritualistic practice of honour and appeasement to those deities) while consciously suppressing the will vs stretching and strength training alone (for health and physical vibrancy) and without any intended spiritual connection.

For the spiritual versions, some people may substitute or include their own faith base during these practices in lue of any Hindu beliefs. For example, connecting with Jesus during any stretching activities would certainly would be a positive (and not an open door to hell). Hence, it becomes a tool for one’s life, like anything else. The intent will determine the attraction to any spiritual presence and influence the outcome.

An object can be used for good or evil, just like a ritual can be used for good or evil. But intent is the key over everything. For example, people have opened doors by watching certain dark movies repeatedly. So, should we shun everyone who watches movies in general? Are we all damned to hell? Of course not. Certainly not in general. But it all depends on the intent, the focus, and perception of the exercise or activity.

So know the difference. We say be aware of what the differences are and what Yoga has been used for, both in the past, as well as the present (thus the warnings we hear from some denominations), but the practice of stretching and strength training in itself can be done with God in your heart and without the added risk of demonic intrusion. Just be smart and know the line.

So yes, there are yoga classes or practices which do not involve appeasing or connecting to any specific deities. But just remember, if they start teaching you anything that doesn’t resonate with you or your belief system, or anything that causes red flags to fly, and then advert course. You’ll know if that is necessary. That will also depend on the teacher’s disposition. This is important. Find out if they are planning on including anything that you may question. Knowing their spiritual beliefs can clarify intentions as well.

There are many who focus strictly on the health aspects, and not spiritual appeasement of anything that is not of God. Thus common sense says that not all yoga can be put in a spiritual category. Many do exercises that just might also be included in Yoga exercises of old. Thus it seems ignorant to conclude that one would be opening doors by exercising naively. There is a lot more needed to open doors to the devil than moving one’s back a certain way.

So, bottom line. Stretching routinely in and of itself is all right. But appeasing deities/demons with certain poses consciously while submitting your will? Not so much. Biblically speaking, that is a no no. Common sense says “I see you are opening a doorway there…” You know the old saying, “If it’s not of God, it’s of the devil”. Again, know the difference.

Whether we are talking about Yoga, or yoga, this activity is about personal intent, which may ultimately influence your perception as well. Intent and perception are the most relevant words when it comes to matters like this. So, be smart and be safe. It’s a tool. Your intent for that tool along with prayers to your higher power for wisdom and protection should influence the ultimate outcome. Peace and Blessings.

Note: This article is from a non-denominational perspective. Some religious denominations may offer different opinions on this matter. Thus, we always advocate additional research into a topic when one is uncertain about something. We also recommend praying for wisdom so one may find the truth one seeks. Good luck and God bless.