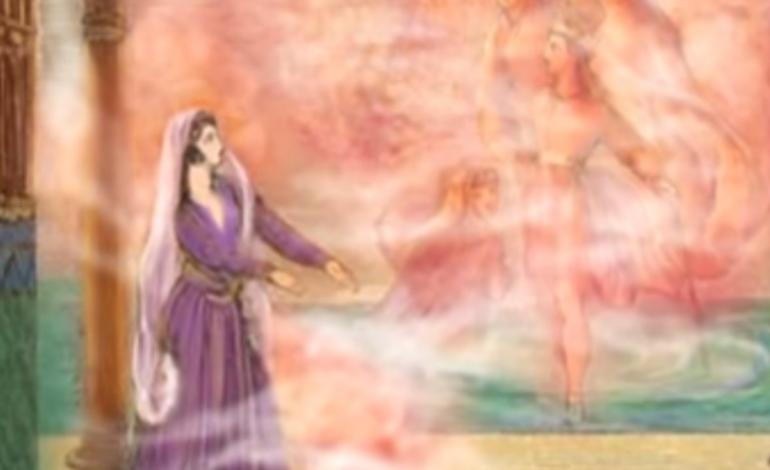 Not a title you will read often as there is little in print on arcane traditions of desert lands.

Normally one can find details of fortune telling where a Sorceress melts a cheap metal alloy in a ladel on top of a camping stove and then spills it into cold water. She then reads the patterns, shapes and tendrils of the metal form. Men also do similar but often will use a small amount of oil on their thumb nail as a Scrying device.

All of this pales in cultural significance to the Egyptian Zar ceremony. It is similar to the Maghrebi Gueudra (the Maghreb is the land to the west of Egypt in northern Africa). Both of these are rituals with the express purpose to heal mental illness and this form of ceremony is conducted from Morocco across to Iran.

In would be a very long article indeed, to explain the differences in each variant so we will look to the Zar ritual. There is also a similarity with the Vodou of Haiti and indeed some slaves captured and sent from Africa to the plantations were Muslim and as such Zar was no doubt part of that Caribbean melting pot.

Mental illness is a terrible malady and most cultures developed their own ways of ridding the afflicted. In the case of the Zar, it was considered the last resort. It communed with the spirits that possessed the affected person. Practitioners however regard it as a very powerful method of dealing with mental and psychological distress.

In Egypt Zar is spoken of in hushed tones as it is illegal, even though it is an integral part of society. The further south in the country you go, the more it appears to be practiced and of course over the border and into Sudan. As a ritual it is of great importance to Anthropologists as this southern area was not exposed, or not exposed much to Greece, Rome or the Middle Eastern Empires. It appears more natural in origin and as such from a far older African pagan origin. Some sources cite Ethiopia as its place of birth.

As opposed to the modern ceremonies of most religions, women were key to Zar and are its guardians, protectors and Priestesses. These trance ceremonies of drumming and dancing do see male involvement in the drumming or playing of instruments, not in the running or spiritual work. The men are there to provide the rhythm for the women to work and weave.

The reason for the secretiveness in some areas is due to it being classed as a pagan practice, although most practitioners would call themselves Muslim. As such the spirits that are being forced out of the poor souls afflicted are considered Djinn. The spirits of fire created by Allah at the same time as he created man from clay. Djinn can be helpful or harmful. The harmful ones who inflict mental suffering are obviously dangerous in the mindset of the believers and as such only experts can lead such ceremonies.

In a Zar ceremony, a large room would be employed. Often a house is rented purely for the purpose of holding the ritual. While the men are at Mosque for the Friday Prayers, the women would gather and hold their ritual. While ceremonies of a few hours are common, others have been known to continue for up to a week or until the dancers drop with exhaustion.

While I mentioned earlier, men can enter and play the music, some gatherings will only permit one male. It is his job to play the “Ney” flute which carries great phallic symbolism.

The music starts playing, the women sway, giving way to suppressed emotion, dancing leads to the swaying of heads and tossing of hair. The building creates a trance state.

The leader is herself possessed during the ceremony. She has conquered her “Djinn” and is therefore able to help others. Heredity is considered an important qualification; leadership is often passed from mother to daughter or through female members of the family. This leader wears a white kaftan and covers her hands and body with henna and her eyes are rimmed with kohl. The patient is heavily scented with special secret Zar perfumes, as are the others present. The idea of the perfume is to purify those present by inhalation of its vapors. The scent is also an offering and often frankincense most welcomed by the Zar Djinn.

Earlier I mentioned the altar. This is a very important part of the ceremony. Unlike many religious altars it is round and is often a circular tray on a platform in the center of the room. It is covered in a white cloth and upon which are offerings of nuts and dried fruits.

As the dancing starts the leader often called the Kodia, watches the patient and assesses from her movements and reactions what form of spirit is within. She will sing the songs particular to that type of Djinn. The sick woman’s movements would increase in intensity and speed, her eyes half closed, appearing totally oblivious of her surroundings. She abandons herself completely to the dance. Her movements flowing freely from the within, from her torso to her limbs, gaining strength and speed as she comes full circle around the altar to where the helpers are ready. At the climax she throws her arms up and falls. The helpers however catch her and allow her to lower carefully to the floor.

In the trance, the possessed women are at the will of whatever Djinn is within them and some bizarre behavior can occur. This behavior ranges from smoking, drinking and wild dancing to sword fighting and threatening men publicly. This may not seem terribly unusual but bear in mind the cultural norms of the region.

This may sound like an exorcism, but it is not. The object is not to remove the Djinn from the body but to please the spirit and obtain the spirit’s favor.

In some Zar rituals it is essential that the group who attend the ritual go at the conclusion in procession to the Nile or the nearest local body of water with the remains of the sacrificial meal and the instruments in order to dump them all in the river. Afterwards the patient is advised to be attentive to her Djinn, perform daily work the spirits ask, avoid dirt and refrain from negative emotions. Failure to carry out these instructions may result in a relapse in the patient’s condition.

Many percussionists and belly dancers use Zar Rhythms. One famous Egyptian percussionist Hossam Ramzy in a recording with New Age composer Phil Thornton worked with Zar Rhythms in their work “Land of the Pharaohs”. This has been the gateway for many westerners entering the world of Middle Eastern music. Few however realize why the rhythm is so biz-Zar-ly hypnotic. This link is given as a good example of how effective this rhythm is. http://youtu.be/Dnsw39pz7Cc

This Serpentine video gives a little history and shows some Zar ritual. http://youtu.be/2KJFlDtT70c

Interestingly, Zar is also sometimes performed on stage during belly dance performances. The reason is obvious as with most cultures or countries where an activity is banned, it is repackaged, in this case as a folk dance or performance art in order to keep it alive. It must also be acknowledged that female only spiritual or sacred paths or activities from Middle Eastern or North Africa could easily die out in this very paternally based world unless preserved so the deliberate action to keep such traditions alive can only be applauded.

For men reading this article I would strongly suggest if you are interested in trying a Zar ritual, to leave the ritual work to women and concentrate on providing the rhythmic support of drumming or playing the ney. If you listen to the drumming in “Land of the Pharaohs” mentioned above you will understand how potent being able to produce this beat can be.

For women interested in learning about Zar, of course you can look up resources available or gleaned from this article, but as an expert is needed to lead I would suggest finding a leader. You will perhaps be surprised many Belly Dancing teachers who are steeped in the lore of their craft also lead Zar rituals.

In conclusion Zar is a vital aspect of women’s magic and spirituality in a region where their religious role is very narrow. This ceremony is empowering, provides an emotional and mental release. It could be construed as a politically rebellious act as it is egalitarian and loosens the shackles of self subordination and accepted role in society. Indeed the men serve the women. Then again in its reason for being it is on one level very effective group therapy and on another, highly developed spirit communication.