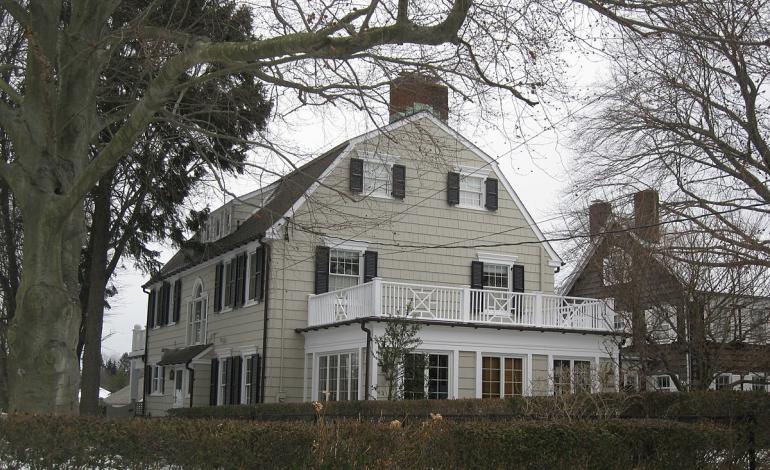 It’s every newlyweds dream! To move to a picturesque quaint town, with a friendly community.

This is what George and Kathleen Lutz thought they had found when they moved into 112 Ocean Avenue, Long Island. The five bedroom house was built in 1927, estate agents referred to it as “Dutch Colonial “style.

The Lutz family were aware of the history of the house when they moved in there December 1975, which makes some people doubt the story about what happened to them during their 28 days there

On November 13th 1974 at 3:15am .23 year old Ronald DeFeo JR shot his entire family using a 3.5 Marlin rifle. He shot his abusive father ( Ronald ) twice in the back, and his mother ( Louise) twice also , but only shot his siblings ( Dawn, Allison ,Marc,John,Matthew) once .

It was later confirmed by police that none of the victims had struggled or had been sedated. Which in my opinion is extremely odd, especially when they revealed that there had been no sound suppression on the rifle, which in logical terms someone would have definitely been able to hear the mass shooting? But all the neighbours heard was the dog barking.

Ronald Defo Junior had an abusive upbringing curtesy of his father as well as his time at school. Which resulted in him lashing out throughout his teenage years and living a sinful lifestyle (cash embezzlement, theft, drink, drugs at the age of 17 onwards???? Specifically Heroin and LSD. Which coincidentally are used to channel the spirit world by many tribes throughout the World?)

According to my resources there was one occasion when he threatened his Friend with a rifle during a hunting trip and another occasion when he actually tried to shoot his father with a 12 gauge shotgun, but malfunctioned.

When questioned about the murder of his family in court DeFeo claimed that “he was possessed by Satan and he heard voices telling him to do it.”

So my question is he actually possessed or is this all down to him being mentally unwell? How do we distinguish this case? Is it indeed a supernatural one which many people believe it is or just the actions of a cold blooded killer?

Whilst doing research for this article I watched the Warrens show “ Seekers of the Supernatural, Amityville “ the Warrens were called in by Marvin Scott ( a channel 5 anchor man) prior to going to the house all Ed and Lorraine knew was that a tragedy had happened in that house .

Demonologist Edward Warren made it quite clear during the show that neither him nor his wife Lorraine agreed with the movie or book about the Amityville Haunting.

“ Allot of people don’t know this , but six months before the murder took place , Mr Ronald DeFeo senior had gone to Saint Joseph shrine in Canada and had brought back Father Pikararo to bless the house . Whilst the priest was in that house Ronald DeFeo Junior could not stand to be in the house so left.

We heard and saw all manner of things .Doors slammed, phantom footsteps. Candles blowing out by themselves. “Mr Warren said sternly.

“George Lutz was a no nonsense kind of guy! He challenged whatever is was to come out so he could fight it.” Lorraine added. When questioned by Ed about what had happened in the house Mr Lutz seemed hesitant to even tell him, all he said was

“You know what happened “which made the warrens think that he didn’t want to say what had happened to him in case of giving the spirit more power.

According to the Warrens the ground where the house stands was used by the Shinnecock Indians. According to the neighbours at the time Mr Lutz had placed blessed religious icons all over the garden.

He also told them that he had “A devil on his back “Ed and Lorraine Warren spent time with the troubled family over a two week period in California, Kathy and George Lutz had three children at the time (Chris, John, Missy) the youngest child Missy started to talk about her Friend Jodie the pig who used to come into the house, and rock in a rocking chair.

During the investigation at 112 Ocean Avenue, Ed went down to the basement and used religious provocation. He commanded in the name of Jesus Christ what was there to reveal its identity.

Within seconds he felt a pressure push him down to the floor; he refers to this incident as religious resistance. Lorraine was asked to communicate with the spirit, so during a walkthrough of the house just as she was going up the stairs ...” it was the worst feeling! It was like I was going against a tremendous pressure on my body.” The team then entered the sewing room upstairs and Lorraine remarked “I hope this is the closest to hell I’ll ever get.”

There were various occult items in the house including book of shadows a skull etc., which could have belonged to either Ronald DeFeo Jr or George Lutz, as both of them according to resources used to take an interest.

One of the most unbelievable and infamous paranormal photos was taken during the investigation in Amityville.

A young boy appears to be looking out of one of the rooms at the camera.

“A diabolical spirit that appears in that home to confuse investigators. Positively evil.” Edward Warren said as he talked about the photo.

I don’t think the World will ever truly know what happened in that house. Some of the people from Long Island I asked had this to say when interviewed

“Honestly, if you didn’t know where the house was, you would never even know you were driving past it.

It looks completely different now. I’ve never felt anything being there and I’ve been to it a bunch of times since I was a kid. And it depends who you ask about the haunting. Some people believe it; some think it was a hoax.”

“The place has a strange atmosphere to it I can’t explain it. I’m still not sure wherever the story is true or not.”

What do you think?