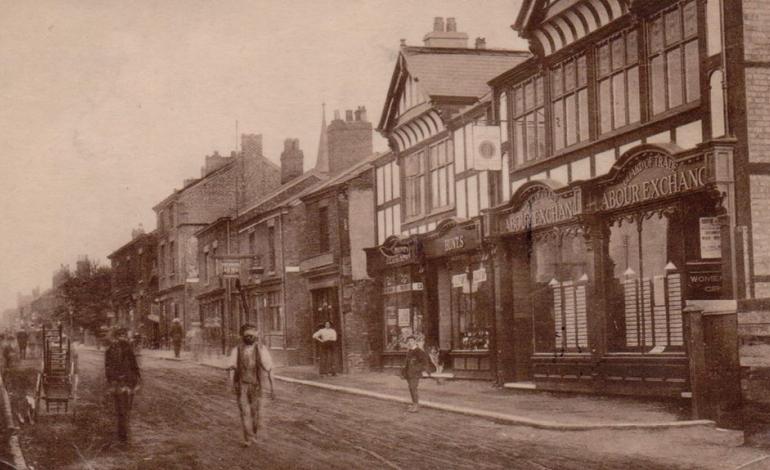 A lovely warm early summer day and we were sitting outside at a cafe sipping coffee with a friend, deep in conversation when suddenly there was a chill in the air. There was no breeze and the air was surprisingly was very still. ‘Someone just walked over my grave’ Jackie said. ‘Yes’ said Steve, ‘someone just walked over mine as well’. Our companion looked at us as if we were both mad. As Mediums we are always in tune to different and subtle energy changes, and this was one of those times. We knew spirit were around us and for some reason they were trying to attract our attention. Not wanting to alarm our guest, we changed the conversation and the atmosphere soon returned to normal.

A few days later we were walking up the main street chatting away having called at the printers on route to Feathers Academy, our spiritual centre in Northwich. Suddenly the air changed, just as quickly as it had done previously. We stopped and looked at each other, our psychic antennas tuning in like radar. Trying not to draw attention to ourselves, which can be very difficult when you are literally stopped in your tracks, we decided to go back to the cafe where we had been when we had first encountered the energy change. Sitting outside would be the easiest place for us to tune in without looking like we should be locked up for closing our eyes and talking to thin air.

We waited to see what would happen and we didn’t have to wait long. The sound of the wheels of a wagon could be heard, and horses hooves and yet we were sat in a pedestrianized area with no horses in sight. As suddenly as it appeared, the sound disappeared and although we tried to re-connect, frustratingly nothing happened. We were just about to call it a day when Steve saw something move out of the corner of his eye. ‘There’s something over there, the other side of the road’ he said. Jackie looked but by that time there whatever it was had gone. Steve explained that he thought he had seen a shadowy figure running quickly down the street. Following in the direction, we were led to a narrow alley way, but there was no one to be seen. We were about to leave when a piercing scream stopped us in our tracks. The sound seemed to be coming from the alley way behind us, and yet there was no one there at all, and nowhere that led from the alley that could have echoed the sound. ‘Are you alright?’ Steve called out ‘Do you need any help’. ‘Where are you?’

His words hung in the air, but no one responded.

As we started to walk away Steve suddenly stopped ‘did you feel that Jack?’ he asked. Jackie looked at him ‘Did I feel what?’

‘A thudding sound, like someone running, but it’s muffled as if they are far away and we can only feel the vibrations underfoot.’ ‘There it is again, it’s getting closer now’

‘Oh yes’ Jackie replied, ‘I can feel it now, there’s a sense of urgency to it isn’t there’.

We stood still and waited, the sensation of running feet getting closer. The footsteps seemed to be rushing past us and into the alley way. It was a very strange sensation to be able to sense but not to see.

‘Who are you’ Steve asked into the thin air. There was a sudden crackling sound and a lot of mixed voices seemed to be trying to talk all at once. ‘Oh flippin heck’ said Steve ‘we could have a whole bunch of them here needing help’.

It seemed an age that we stood there listening and waiting, but nothing happened and no one spoke.

Jackie turned to Steve, ‘I think we will have to try some different tactics. What if we just filled the whole of the alley way full of spiritual light and see if we can help them in that way. ‘

Standing side by side we started to fill the entire area with a spiritual white light, asking all the time if there were any spirits there who needed help to step forward.

The air started to crackle again and the shape of a man emerged almost out of a fog. ‘It’s not me that needs help, it’s her’, he said pointing over to what looked like a heap of rags at the corner of the alley way. On moving closer we could see the shape of a woman dressed in really old fashioned clothing lying on the floor. She was crying and clutching her sides. The male spirit then told us that he was trying to help her to understand that she was dead. She had been crushed against the wall by a horse and cart. The horse had got spooked by something and had made a sudden dart towards the alley way, which was not wide enough for the cart. The cart had crushed the woman against the wall and she had died a painful death. He was trying to talk to her to tell her it was alright and that if she was to follow him, she would feel no pain.

We decided to try sending healing energy to the woman whilst the spirit man talked to her, and hopefully between us all we could help her to go through to the spirit world and to get the help there that she needed.

Holding our hands out towards the woman, we connected with our healing guides and channelled the healing energy, visualising a beautiful green and gold light surrounding her. It was really quite a surreal moment as the entire area seemed to light up and glow, then within a moment everything returned to normal and we were stood in the alleyway looking at one another in amazement. A sense of peace overtook us both and we knew that the woman, whoever she was, had gone.