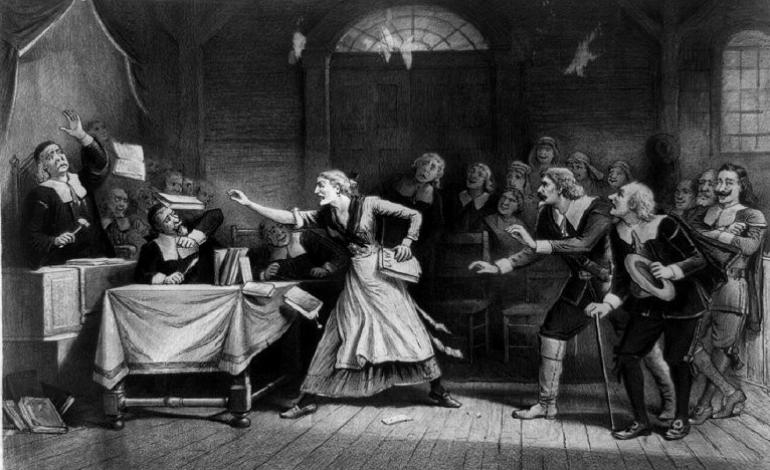 Anyone who has visited historic Edinburgh, and taken time to soak in it’s legends will know that in it’s long and macabre history, the city is no stranger to Witchcraft and during the 17th century had no shortage of witches. According to records, one of its busiest and most productive witches being Agnes Finnie who lived in the Pottersrow Port area of the city. She was convicted of Witchcraft in 1644 with a total of 20 charges made against her. If ever there was a successful witch worthy of her neighbors fear and accusations, it was Agnes.

But was she a witch? Was she able to exert some kind of supernatural force upon others? I encourage you to read on, and then decide for yourselves.

It is documented that on one occasion while on his way home, the young son of Mr. William Fairlie passed Agnes in the street and promptly called out “Agnes Winnie!” an impromptu nickname he would very soon regret. Agnes publically cursed him and within 24 hours he had completely lost the use of his left side and became bedridden with “so incurable a disease” that his family knew he was dying. One week later he was dead with medical physicians describing the cause as something ‘supernatural’. The young boy was not the only neighbor of Agnes Finnie to suffer her wrath. Beatrix Nisbit had annoyed Agnes is some way and so was given a most ‘fearful disease’ in which she lost the use of her tongue, never able to utter another word. With this Agnes had made sure her neighbor could not annoy her further. Beatrix was fairly lucky however, in that she escaped with her life unlike poor Janet Grinton. Janet was a fishwife and had sold Agnes 2 herrings which upon eating Agnes had decided were unfresh and so went to demand her money back. Janet, in failing to refund Agnes the 8 pennies she had paid, seemingly sealed her own fate. Agnes screamed at Janet that she would “never again eat another thing in this world!”. Sure enough, the fishwife died that very day before another crumb could pass her lips.


As with most people accused of witchcraft at this time it was the common belief that Agnes had made a pact with the Devil, and had regular audiences with him. One piece of evidence that suggested she was engaging in acts of ‘devilrie’ was recorded following a visit Agnes made to the son of Mr. John Buchanan. Mr. Buchanans son had cerebral palsy and desperate for a cure, his parents called for Agnes to visit him which she did. After a few moments in the room with the sick child, Agnes asked his parents to leave the room to go and pray for him. When they returned they found their son so ill that he could not move any part of his body. As they held him up and tried to help him move his mother screamed out in horror. What they discovered was a large wound about the size of a hand, on his right buttock as if a chunk of flesh had been literally torn away. The child died within a week.

Agnes however had not yet finished with this family. The child’s mother Bessie Currie and Agnes got into some kind of heated dispute over the changing of a sixpence. Agnes, who was not happy with how the argument was going, threatened to summon the devil to come and take a bite out of her, as he had her son. At this point Mr. Buchanan came onto the scene and of course supported his wife, thus incurring Agnes’s wrath. He called her a witch and threatened to throw her over the nearby staircase unless she ceased upsetting his grieving wife. With that, Agnes simply walked away. That night however, he became very ill indeed with a fever, but he was a strong man, and by the next day he seemed to have slightly recovered. Feeling he had the upper hand, he visited Agnes to tell her that unless she lifted the evil from his body he would tell the whole town how ill she had made him. In an instant he felt better. But it would not be for long…

Sometime later Mr. Buchannan entered into yet another argument with Agnes. Agnes had refused to give Mrs. Currie a cake on credit. Agnes demanded that they leave her premises immediately and uttered that as his birth had clearly been caused by a witch, then so too would his death. Immediately upon returning home he “contracted a long and grievous sickness, whereof he was lyke to melt away in sweiting”. It will come as no surprise to readers by this point that soon after, Mr. Buchanan died.

Although Agnes had not seen fit to give credit to Mrs. Currie for the 12 penny cake, it seems she did give credit to one Isobell Atcheson. However, when the time came to settle the bill, the 2 ladies disagreed on the amount. Once again Agnes declared she would summon the devil to ‘ride about the family’ and wreak havoc upon them. Predictably, the next day, the poor woman Isobell fell from a horse and broke her leg. Apparently pleased with this result, Agnes felt a similar punishment was due to the daughter of Euphame Kincald. Mrs. Kincald made the mistake of arguing with Agnes and calling her a witch. Agnes replied by stating that if this were indeed the case, them her family better watch out. Accordingly, a few days later Mrs. Kincalds daughter was out playing next to Agnes’s house when a huge wooden beam fell and crushed her leg to a pulp rendering it useless forever more.

There are several accounts of Agnes threatening to call upon the devil to aid her in her workings. A lady named Margaret Williamson suffered one of Agnes’s worst attacks following an argument in the street. Agnes screamed that she would summon the devil to ‘blow her blind”. Soon after Margaret fell very ill, and lost her sight.


So what can we deduce from this? Well clearly Agnes was a woman who was very able to defend herself in an argument, and apparently well aware of the rumors about her. Later reports show us that she was equally able to protect her own family.

Robert Wat, a highly prestigious shoemaker in Edinburgh was foolish enough to fine Anges’s son in law Robert Purse for ‘riotous behavior’. Outraged Agnes went to where the shoemakers were all meeting and whacked Mr. Wat over the head with her cap, stating that his greed had become his downfall and that he would not earn a penny more. In itself not a particularly appalling act however in this case it is believed that revenge was slow and sweet for Agnes, as from that moment on, his thriving business went into rapid decline. Much time passed and one afternoon Mr. Wat was engaged in conversation with Agnes’s grandson when Agnes arrived unexpectedly. She reminded him of the blow to the head he had received and warned him that his business would continue to fail unless he apologized to her son in law. He did so, and refunded the fine to Mr. Purse. Within 1 month it is reported that his business recovered and Mr. Wat returned to his former prosperity.

By this point it can be reasonably assumed that Agnes Finnie ran a general store of some kind, and yet it’s incredible to imagine why anyone would have taken their custom there. One such person was Christian Harlow who ordered and received a delivery of salt. Either ignorance or skepticism led him to return the salt claiming he had been overcharged. He did not encounter Agnes that day but her helper and was given a refund. But the story did not end there. Christian fell terribly ill. Instantly the family suspected Agnes and summoned her to the death bed, demanding that she lift the curse in return for a significant payment. This she apparently agreed to and Christian recovered much to the disbelief of physicians.

As a widow, we can imagine that Agnes was very careful with her finances, and it seems from some of the stories we’ve heard so far that non payment of outstanding debts was a particular annoyance for her. A foolish young woman by the name of Mrs. Sympson came to learn this when she asked for a second extension of a further 8 days to pay off a loan that was long overdue. Agnes flew into a rage and told her that she would have a very sore heart indeed if she did not pay her when the 8 days were up. The debt was not paid and on that very 8th day Mrs. Sympsons Husband died.

The accounts linking Agnes Finnie to Witchcraft continued to build. John Robeson was sent into a hellish fever simply for calling Agnes a witch. John Cockburne was terrified by the appearance of Agnes in his bedroom one night even though the windows and doors were locked. The reason for her ‘visit’ was that he had disagreed with her daughter. William Smith was ruined and left a pauper meaning he could not recover his belongings pawned at Agnes’s shop. Janet Walker received a terrible sickness from Agnes while she was in the late stages of pregnancy. Only when summoned by Janet’s sister, desperate for her sister and unborn baby to be well, did the illness lift. The reason for Agnes causing this illness is not recorded but it seems that just maybe, she took pity on the life of the unborn baby and lifted the curse.


Finally, after 28 years locals held a meeting and declared that enough was enough. On December 11th 1644 Agnes was tried and convicted of being “in continual society and company of the Devil” and condemned to be hung outside Edinburgh castle, and then burned at the stake. In one final statement Agnes confessed that she had often consulted with the Devil and that she was a ‘rank’ witch, a term used to describe a witch who is ‘noble, proud and powerful’.


Today, at the eastern end of the castle esplanade you will see a small plaque and wall fountain which marks the spot close to where Agnes Finnie and as many as 300 other women were burned at the stake for allegedly being witches. Often the witches were strangled first and then their bodies burned. During the 16th century more witches were burnt in Edinburgh than anywhere else in Scotland.

Those feeling brave whilst in Edinburgh city can take part in a number of ghost walks on which you will explore the alleyways and graveyards of the Old town in search of Agnes Finnies ghost. Should you be one of those fortunate (or unfortunate) enough to encounter her, it is said that dropping a coin at her feet will ensure she does you no harm, so before you take part, make sure you have plenty of spare change!