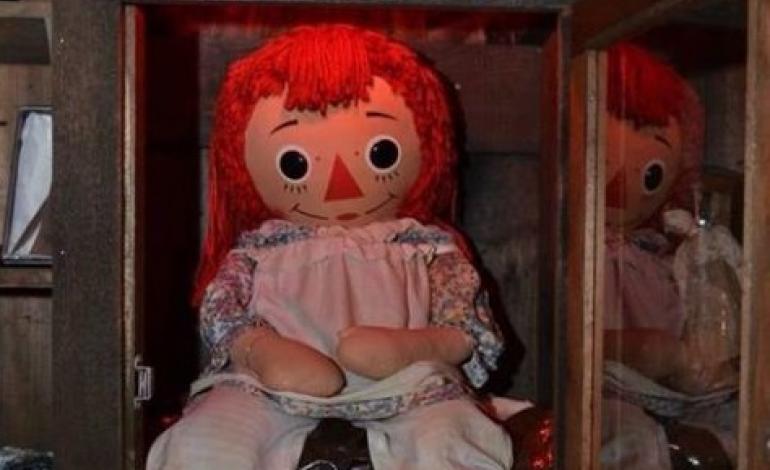 In 1970 a young woman who was studying to be a nurse, received a raggedy Anne doll from her mother. Raggedy Anne is a character that appeared in a series of books for young children. Raggedy Ann has red yarn for hair and a triangle nose. The character was made into a doll in 1915.

As far as the buyer of the doll knew it was just a normal doll, one of the many Raggedy Anne dolls. Little did they know what was about to befall them. Delighted with her beautiful present, Donna decided to place it in her bedroom at college. Donna and her friend shared accommodation, they would often invite their friends round for supper.

But one evening when Donna was showing off her Raggedy Anne doll to their friend Lou, their apartment was suddenly engulfed with a strange atmosphere, an energy shift. The doll was supposedly haunted by a spirit of a young girl named ” Annabelle Higgins” However that being said, Demons or other such spirits often pretend to be the spirits of little children so that they can lure there victim into a false sense of security, and if they succeed it is very likely that the victim will experience Oppression (This is where the entity makes its true identity known and moves into full attack mode. This can be physical, mental, and psychical in nature and is designed to break the affected person’s will to live. Sleep deprivation, increased paranormal activity, bites, scratches, and even sexual assaults may take place)

Donna and her friend returned home one evening to find the rag doll standing upright and leaning against a chair in the dining room, as if it had frozen mid-step when it heard the door open. ““The doll also changed rooms by itself. We came home one night and the Annabelle doll was sitting in a chair by the front door. It was kneeling! The funny thing about it was, when we tried to make the doll kneel, it’d just fall over. It couldn’t kneel. Other times we’d find it sitting on the sofa, although when we left the apartment in the morning it’d be in Donna’s room with the door closed!”

Was this doll actually possessed or was it a figment of their imagination? It was not long before the activity of the doll became more apparent. Parchments of paper would be scattered across the room asking them to help her.

In desperation they went to the infamous paranormal investigators, Ed and Lorraine Warren, who after much investigation decided it, was best to take the doll of them so they would not be affected by it anymore. Throughout the decades Ed and Lorraine Warren have collected many possessed items from infamous cases. So that no harm could come to the general public, they decided to store the items in their shed, and even have a Priest come once a month to bless the room.

The “Shed” has since then been turned into an Occult museum, so that Paranormal fans can go and see for themselves the items. However the Warrens have one rule, the visitors can not touch anything! Otherwise the evil spirits will attach themselves onto them and cause them nothing but trouble/harm.

One day a young boy went to see the items with his girlfriend, Annabelle the doll is preserved in a glass case in the museum, under a red neon light, her black eyes seem to follow guests around the room, almost as if she is watching them! The young man, who after hearing the story about how the museum acquired Annabelle, started to make fun of the story to his partner. “This is a load of rubbish!” he apparently exclaimed. When Tony Spera was not looking (He is the son in law to Lorraine Warren and Ed Warren) the man went up to Annabelle and started tapping violently on the glass, provoking the spirit that inhabited the doll to do something if it was real. Shortly after they were asked to leave by Ed Warren…

One hour later the young man died due to losing control of his motorbike and crashing into a tree, his girlfriend survived, according to her the last image she saw in her head before the accident was of the doll. An omen?

“Annabelle the cursed doll, inspiration for 2014’s American supernatural psychological horror film Annabelle, starring Patrick Wilson and Vera Farmiga, will be viewable away from The Warren’s Occult Museum. Come learn about how Annabelle was responsible for the death of a young man who challenged her.

Do not miss this extremely rare chance to view in person, three of the most infamous and diabolical objects from the Warren’s Occult realm and bonus secret artefact!” “This quote was from an advertisement from “An evening with Annabelle” Which the Warren family hosted quite recently, But is it really wise to be touring with such a haunted and dangerous item?

On various social media sites I have seen people brag about how they are going to meet Annabelle the doll, and maybe they are oblivious to the danger of her. Apparently if you do not touch her you will not be harmed, according to the Warrens. I don’t know if it is just me, but every time I see a photo of that doll I can almost feel the intense energy radiating from her. Although the doll has been exorcised several times it is believed that energy is still attached to it.

Ghost Adventures (A paranormal team from America, who have conducted investigations in some of the most haunted places in the World) were lucky enough to be allowed to do a ghost hunt with Annabelle. Tony Spera warned them not to touch the doll; as if they did they would be at risk of getting possessed. Throughout the investigation Zac Bagans (Team leader of Ghost Adventures) started to become engulfed in the dolls atmosphere to such an extent that he eventually did touch her.

Infuriated by this, Tony Spera storms into the room where they are conducting the investigation and says “Don’t touch the fucking doll! This is no joke! When I said she is responsible for killing a young man she did. “Zac Bagans apologises and says he doesn’t know what came over him, He felt like it was almost as if Annabelle was asking him for help, her energy consumed him. Shortly after this Tony Spera leaves Zac Bagans haunted museum (Which is situated on the LAS VEGAS strip.)

Annabelle the doll is a truly fascinating object, but proceeds with caution!