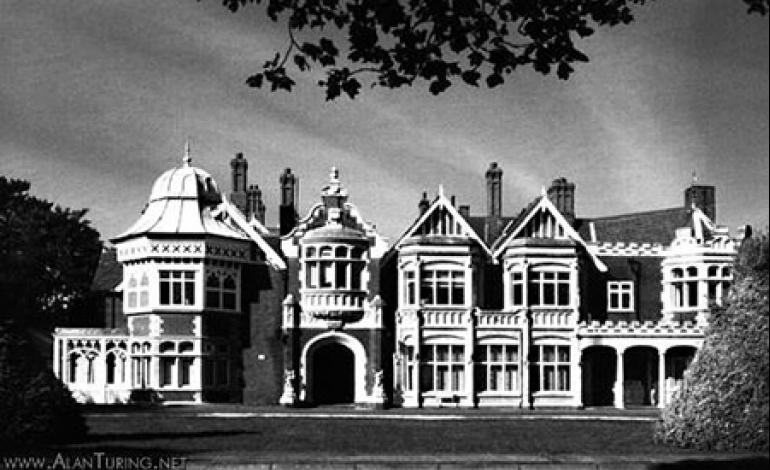 For many years my hubby Steve and I had promised ourselves a visit to Bletchley Park in Buckinghamshire. Both of us interested in this fascinating place, home to the codebreakers who changed the course of history and the outcome of World War II breaking seemingly unbreakable codes and ciphers. The German Enigma machine allowed the operator to type a message which was then scrambled via rotors and an electrical circuit, using a letter substitution system. The message then became a code. In order to decode the message, the recipient had to have the exact settings used by the sender in order to set his own machine exactly the same, so that the code could then be unravelled. The codebreakers at Bletchley Park were able to do what the Germans believed was impossible, and that was to crack the code.

The excellent tv series The Bletchley Circle, and the brilliant film The Imitation Game strengthened our determination to find some time in our hectic schedules to pay a visit to this fascinating place. Steves birthday in February was a great time to organise our trip, and so suitcases in tow, we boarded a train and headed south.

Bletchley Park is a huge complex and we were glad that we had planned our trip so that we had travelled the previous day and allowed ourselves a full day at the site.

Being a medium, I am always aware of spirit around me, and even though I purposely tune in and out, spirit constantly surprise and amaze me. Today was no exception. Within moments of entering one of the buildings my left ear started to pick up a clicking sound, and I realised this was inside my ear, rather than outside. I could sense the vibration as well as the sound. My right ear was completely normal and picking up the sounds of people talking around me. This odd sensation lasted a few minutes and I moved around a little during this time to test the physical possibilities before concluding that I was picking up on the psychic vibrations of the room. I told Steve what was happening and said it was almost like morse code tappings that I could hear. Within seconds of the words coming from my mouth a film started to project an image on the wall and the presenter explained what the room had originally been used for. One of the things that she mentioned was that the operators had to be able to learn morse code.! Steve and I looked at each other, nodded and smiled, and I thanked my unseen guide for providing me with proof of our encounter. It was going to be an interesting visit without a shadow of a doubt.

Going into the original purpose built huts and buildings was quite an experience. Each individual room had a different feel about it. It was easy to slip in and out of the atmospheric changes. There was a mixture of emotions, excitement, frustration, urgency, stress, weariness but all with an overlying sense of comraderie. It made sense of how the workforce would have felt at various points of the day and night as posts were manned 24 hours a day, with shifts changing constantly. The top secret work that they undertook was paramount to the war.


Walking from the huts towards the Mansion itself on a sunny afternoon in February 2016 was a far cry from the footsteps taken by those some 76 years previously. The layout virtually the same, walking past the lake with the view of the big house beyond. The tennis lawns to one side with the sounds of the ball hitting the racket, backwards and forwards. Hut 4 to the left of the hall running its entire length and standing out like a sore thumb against the elegant building that is Bletchley Park Mansion. Built late 1870’s and becoming the home of wealthy stockbroker Herbert Lyon and family in 1883, Bletchley Park is a showcase of Victorian opulence.

Bought for the use of the Government in 1938, it was a perfect location for their Code and Cypher School and MI6 sections with the threat of war looming. This is where it all started at Bletchley and not one to miss an opportunity, I silently adjusted my psychic antennae and spider senses to see what, and who, I could tune into. If coded messages had been sent via radio and telephone during the war, and they had been intercepted and interpreted right here, then maybe I could tap in myself.

I waited until there was just myself and Steve in the room and then placed my hands on the wooden panelling on the walls. I started to feel the familiar buzz underneath the palm of my hands, an indication to me that I was linking into ‘something’ or ‘someone’. Expecting the room to change (psychically) into a hub of war time activity I was surprised to hear the footsteps of small feet echoing as they ran across a wooden floor. Opening my eyes I saw the image of a young boy dressed in a dark blue sailor suit running around the room. He seemed very happy and totally engrossed in his activity and either not aware of my presence or not particularly bothered.

I tried to catch his attention and to ask who he was but before I could make that spiritual connection he ran towards the door and his image started to disappear in front of my eyes.

I have always been told by my spirit guide to expect the unexpected where spirit are concerned, and on this occasion that was exactly what it was, unexpected!

Intrigued by his presence I was determined to see if I could find out if a little boy connected to the house had passed away as a child. I have since discovered that the grandson of Herbert Leon had died at the age of 4 years old in 1911, and although he had never lived at the house, I am sure that he would have spent many happy times there during his short life. Strangely the photograph that I took in this room has a wispy smoke effect on the right hand side. This could of course be a reflection of the light from the window. I hadn’t used a flash on the camera and so it could also be a little boy’s energy rushing past. One thing is for sure, it’s certainly an enigma.