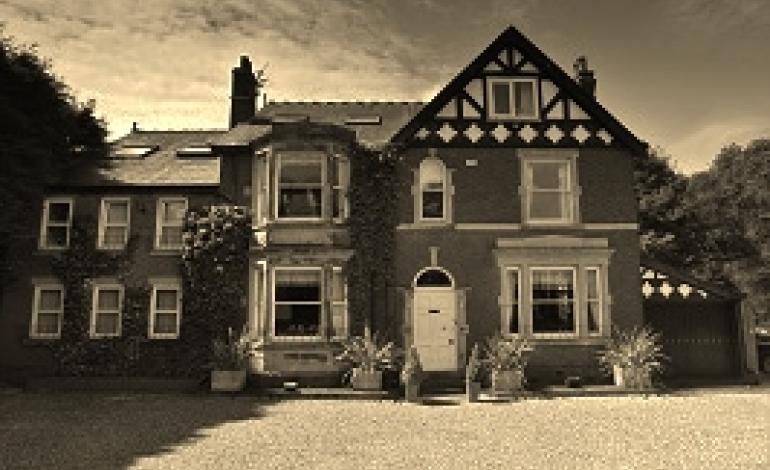 The Sandhurst hotel is a beautiful Edwardian residence that is home to a number of spirit friends, who loved the place so much when they were alive on the earth plane they now like to pop back to visit this fabulous timeless location from time to time.

Built in 1904, it has been lovingly decorated and furnished in keeping with its original style by its present owner. The house is now a hotel, the staff wearing period clothing to complete the total illusion of stepping back in time. This fascinating experience allows you to indulge yourself, soaking up the atmosphere and disconnecting from the hustle and bustle of everyday life. This was obviously the appeal to the wonderful Medium Colin Fry who often stayed at the Sandhurst requesting to stay in the master bedroom complete with its 4 poster bed, when he was touring the North West of England.

We were thrilled therefore when the opportunity arose for us to do a paranormal investigation with a difference at this great location. It was the perfect setting, and without hesitation we knew that we should offer the full Edwardian experience as befitting the times. An Edwardian style séance, table tilting, mirror scrying and good old fashioned dowsing, complete with us dressed for the occasion.

The building was buzzing as the guests started to arrive, you could feel the excitement in the air. It promised to be a night with a difference, and we were not to be disappointed. Splitting into 4 groups with a Medium from Feathers heading each group, we were able to allow all of those joining us to experience every activity that we had planned, and being able to use the entire building was a bonus.

Throughout the evening we encountered many different spirits who wanted to join in the fun. Taking full advantage at having an audience, certain spirits made their presence known during all of the various activities. The spirit of an elderly lady dressed in a long black dress made an impression on a number of individuals, firstly in the dining room, which she called the parlour, and in different parts of the house during the evening. Another one of the main spirit visitors was a chap called George, who regularly made an appearance throughout the night. He enjoyed the mirror scrying, thinking it funny that he could allow the guests to ‘see’ him as he came in and out of focus with various individuals . Connecting too through the dowsing experiments with a number of guests in different groups, confirming through this method that his name was George. He particularly liked the séance sessions as he was able to voice his opinion through different members and groups. So many people to talk to, or rather so many to listen to him, he must have thought he had died and gone to heaven – oh wait….he had ! ha ha ha.

Excelling himself during the table tilting, he was able to lift the table and turn it on its side. Which was quite impressive, and something that he thought was a hoot. Another character from spirit who made her presence known during the table tilting was a lady who took a shine to a some of the males during the evening. Following one of them around the room and backing him into a corner. When he eventually joined the group around the table, she spectacularly lifted the table straight in his direction. Another spirit lady communicating told us that her name was Mary and that she was in charge of these ‘parlour games’. The table started to vibrate as she entered and a series of photographs were taken in quick succession, a bright orb appearing hovering over the table.

There was also a number of spirit children who took great delight in running in and out of the rooms, tugging on the guests clothing to let them know they were there. A fabulous night was had by all, especially by spirit who were having great fun with us.

So who was Mary, and who was George?

We now know from research complied by our historian Anne Jones, that George Williams designed the house, having it built in 1904. His wife was called Mary and although we have located the whereabouts of their only daughter in the 1911 census at a boarding school in Blackpool, we have as yet not been able to piece together what happened to George and Mary and where they went to. The house changed hands and they seem to have simply disappeared. Maybe a second visit is necessary to communicate with this couple again so that they can tell us their story, and then perhaps we will hear Mary say ‘By George she’s got it’ !